What Writers and Therapists Have in Common

Rekindling Our Moral Imagination and Courage 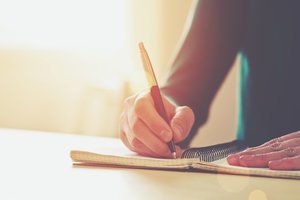 I became a writer in my 40's. As a girl, I'd always loved books. I read old-fashioned books by Willa Cather, the Bronte sisters, Thomas Hardy, Charles Dickens, Dostoyevsky, and Pasternak. I learned the poetry of Walt Whitman and Carl Sandburg and worked constantly to build a better vocabulary. I was surprised when my friends in high school didn't flock to join my club to read all the Great Books.

When I was 10, I told my father I wanted to be a writer. He was a child of the Great Depression and very security conscious. He said, "Writers don't make any money. Be a doctor, like your mother. Then you can support your family if your husband dies." That same year, I wrote a sonnet for my teacher. She gave me a big red C and wrote trite on my paper. I gave up on myself. I thought the world was composed of two kinds of people--the brilliant, charismatic ones and the dull trudgers like me.

I didn't attempt another creative piece until 35 years later. Finally, my children were old enough and my clinical practice sufficiently established that I had some discretionary time. I pondered what to do with it. I certainly didn't want to work more, clean my house more carefully, or take up golf. I realized with a jolt, that, damn it, I wanted to write! I didn't expect I'd be any good at it. I didn't hope to be published. I just wanted to do it. I signed up for a college course in Creative Writing and joined a writer's group.

I came to writing as person with a psychology and anthropology background who was interested in social change. My topic was always the same--how does culture affect mental health? For example, with Reviving Ophelia, the question was how our culture impacts teenaged girls. I asked of my writing not just whether it was good, but what it was good for. I wanted to help people understand the point of view of others, to genuinely care about them, and to act on their behalf.

Our skills as writers and therapists have never been more essential. The survival of the human race, not to mention democracy in America, is at stake. I've never seen people more stressed and fearful. We all seem to require a great deal of alone time and inner architecture to stay calm, clear, and focused. The great cultural interest in meditation, yoga, tai chi, and retreats is about our yearning for inside scaffolding as the outside world becomes more overwhelming.

We're witnessing the rise of fascism in this country. Fear and anguish are employed to pit us against one another. Language is being weaponized. Increasingly, our national discourse employs hate speech and dehumanizing language. Two terms that come to mind are illegal alien and terrorist. Once people are called these words, they're somehow no longer included in the human race. All vile things between humans happen because of objectification and depersonalization. The job of both therapists and writers is to humanize and de-objectify--to teach empathy and point of view. As Gloria Steinem said, "Empathy is the most radical of human emotions."

Therapists and writers foster the growth of moral imagination in other human beings. We help people explore the question Who do we call us? Our work widens the category "us," and narrows the category "them" in the lives of people we teach. Humans are hardwired to construct a circle of caring. Even Hitler cared for dogs. The crucial question is how inclusive the circle is. Most people are good to their own families. The word kind derives from the word kin. But we differ on how kind we are to people who are outside our families. The people who have the best moral imagination (like Mahatma Ghandi, Nelson Mandela, Eleanor Roosevelt) develop a circle of caring that includes the entire human race.

Let me tell you a story about moral imagination that applies to both psychology and writing. It's about my cousin Paul, who gave me permission to tell this story because he respects therapists. Paul is in his forties now. He's a tall, fierce-looking man with long hair and tattoos. He wears black boots and black leather and has lost most of his teeth. He's had rough life.

Paul grew up in a rural, working-class family in Ozarks. He inherited the mental illness that runs in my father's family. As a boy, he was smart, funny, and lovable. He was a master storyteller. In his twenties, he had psychotic breakdowns and, since then, has been seriously and chronically mentally ill. He receives disability payments because he can't work. He's easily rattled by stress. Still, Paul is honest, kind, and dignified. He cares for his disabled mother.

We're a close family. Last time I was at my Aunt Henrietta's trailer, Paul asked me if I'd read his life story that he'd written down through the years in a spiral notebook. I read it that same evening in my hotel room. It contained many sad chapters. Because of his vulnerable and often homeless life, Paul had witnessed many traumatic events. Once he'd saved a man's life by swimming into a lake for him. He'd come across domestic violence, injured animals, and late-night car wrecks, and he'd tried to be helpful. Once in a rural area of Arkansas, he was arrested while psychotic. His parents were looking for him, but these local police didn't read the all-points bulletin. His jailers were cruel. Paul was teased and kept in chains. No one would give him water to drink or let him make a phone call. When he grew frustrated and swore at them, they poured kerosene on him and then burned him. He still has the scars on his arms and back. Another time he was on a street hallucinating and bikers rescued him.

They took him home before he could be picked up and taken to jail.
When I returned Paul's notebook, I asked him what he wanted from me--feedback or help publishing? He said, "All I'd like you to do is to write at the end of the book, 'I understand.'" Writers and therapists strive to develop the moral imagination that allows them to say those words.

Both therapy and writing are whole-person work. The most effective of us work from a centered and focused place. The individual, authentic voice is what matters. In fact, dishonesty is always apparent. Dead words smell bad, like old fish.

Part of learning our craft is finding our voice. This isn't a matter of style, but involves figuring out the best way to use everything we are and everything we know in the service of our work. Anne Frank is a good example of a writer with an authentic voice. She was an adolescent girl in a terrible time and place who used her whole self to tell her story. Voice is "what you alone can say." Figuring this out is a worthy life mission. Voice goes much deeper than charisma or word choice: it's about character structure and point of view on the universe.

Both writers and therapists need their own authentic voices--they need to say what they alone can say. It's worth noting that the therapy room is also a place where the client's voice is respected. Clients are attended to as they tell their deepest, most personal stories in their own language. People leave our offices thinking, as did my cousin Paul, that someone truly understands their point of view.

Both professions are matters of trust and relationship. Writers and therapists encourage people to go on a voyage of discovery. With likable, authoritative guides, people will travel anywhere. If they don't like and trust us, however, they won't take one step. With writers, establishing trust is a matter of being an honest and reasonable narrator. With therapists, it's a question of building a relationship grounded in respect, steadfastness, and common sense.

Both fields require that we confront failure. We constantly reach the edge of our capacities for creativity and connection. We often don't know the effects of our actions. If we succeed at something, we often don't know why. We grow by learning to "fail better," in the words of Samuel Beckett.

I've been haunted by the story of the five Amish girls, who earlier this fall were killed by a demented man, living in a violent, gun-filled, pornographic society that no long takes care of anyone but the rich, the greedy, and the entitled. I can't help thinking of the oldest girl, age 11, who tried to buy time for the younger girls by saying, "Shoot me first." And when the gunman killed her, her 10-year-old sister said, "Shoot me next." These girls possessed moral imagination and courage. For the rest of my life, when I'm frightened to speak out, I'll remember them.

Where are our leaders with this kind of moral imagination and courage? Where are the grown-ups standing up to the bullies and thugs that rule the world? We writers and therapists must do this to save our planet, our country, our children, and ourselves.

Norman McClean said, "One of the chief privileges of man is to speak up for the universe." We therapists are lucky. We have the potential to change the world, at least by our little millimeter, every day. If you have any interest at all in writing, I encourage you to give it a try. You have your own voice to offer the world. Show up. Tell your truths. Speak out.

This blog is excerpted from "Fostering the Moral Imagination" by Mary Pipher. The full version is available in the January/February 2007 issue, Coming Home: The War Isn't Over for Many Iraqi Vets.

I absolutely love this. I am soon to qualify as a psychotherapist, and have always loved writing - but been too fearful / avoidant to really pursue it in the past. I have been wondering about combining the two on my future path. I love what you have written here, and I realise i feel the same as what you've described - I feel so strongly about the effect of culture on mental health, and have those same thoughts about the importance of moral imagination and the courage to stand up for others. Wonderful ideas beautifully expressed.

Thank you Dr. Pipher, for such a moving essay. I have always been inspired by your work and the interests we share, like writing and therapy. You are an asset to our profession and the world.

Mary, Thank you. I am an older clinical psychologist in South Africa. I have long felt the pull towards writing at this stage of my career. When I did a creative writing course I was encouraged to continue but I somehow lacked the motivation to continue. Maybe the timing was not right, but I have been encouraged by this article as it speaks to so much of my experience and our reasons to speak up as champions of caring for our fellow man.