Putting an End to the Blame Game

A Tool for Helping Partners See Both Sides 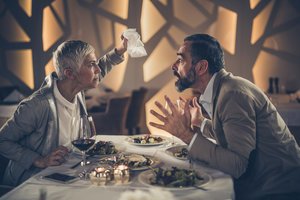 Oliver and Gail came to see me soon after taking a two-week trip to Rome. Gail shied away from rules and loved surprises. Oliver valued predictability and responsibility. Gail had arranged their first vacation together overseas despite Oliver’s trepidation. She’d studied art history in Florence and envisioned romantic dinners, museum tours, and late-night embraces on the steps of the Piazza di Spagna. Oliver had never spent an extended amount of time in a place where he couldn’t speak or understand the language. Having to rely on Gail as his interpreter was distasteful to him. He was overwhelmed by the new and different cultural cues. Gail interpreted his anxiety as judgment and a general lack of appreciation.

“You want me to take the blame,” Oliver said, “when it was both of us.”

“It was not both of us,” Gail countered, as she pulled a notebook out of her purse and flipped through the pages. “You were stressed out on the flight and didn’t want to hold my hand. You complained about everything. You refused to tour the Vatican. On June 14th—”

“Gail,” I interrupted, “what do you need from Oliver in this moment?”

“Just to admit the truth,” Gail said, closing the notebook in exasperation. “That’s why I took notes. Because he can’t admit when he’s wrong.”

Gail and Oliver’s disagreements tended to devolve into a debate about right and wrong. My former couples supervisor and Imago Master Trainer Carol Kramer Slepian often uses the quote, “You can be right or you can be in relationship.” This maxim appears to be a rescripting of self-help author Wayne Dyer’s famous words, “When given the choice between being right and being kind, choose kind.” There’s a great deal of wisdom in both of these statements, especially for couples.

In her book When Things Fall Apart, American Tibetan Buddhist nun Pema Chödrön encourages people who are seeking more peace in their lives to resist the urge to “concretize”—to try to make someone or something bad or good in order to establish a false sense of security or control. When couples choose being in a relationship over being right, they’re avoiding the temptation to concretize.

Once Gail understood that being right wasn’t going to get her any closer to Oliver, she put away her notebook and dropped the evidence that proved her point. Although they couldn’t necessarily go back to Italy to do things differently, Gail and Oliver did start practicing better communication skills. After some initial skepticism, they even practiced “re-dos.”

Re-dos are like another take of the same scene in a movie. They offer a second chance to approach a trigger point differently and deescalate a situation by literally redoing the scene of your rupture. During your re-do, instead of saying, “Why don’t you ever take walks with me?” you can ask your partner, “Would you like to go for a walk?” In turn, your partner can respond in a friendlier voice than they did during the first go-round. Instead of snapping, “Can’t you see I’m working?” they might say, “Thanks for the invitation. I wish I could, but I’m busy right now.”

Performing a re-do of a triggering moment, starting just before the trigger point and incorporating whatever your partner has told you they would need to feel more connected, can put things in perspective as you reenact the scene.

One day when Oliver picked her up, Gail felt upset that he didn’t greet her. She could feel herself about to criticize him. Instead, she asked for a re-do. “Can we do this again?” she asked calmly. “When I approach, can you say, ‘Hello, sweetie, good to see you,’ look me in the eye, and give me a kiss?” Oliver recognized he’d been distracted and agreed to try it. Running through the scene again, he smiled, said, “Hi, sweetheart, good to see you!” kissed her on the cheek, and then they went on to have a pleasurable evening.

Even if re-dos lack spontaneity and seem performed, they can still effectively move partners toward repair, and sometimes bring humor and perspective to an overly weighty situation.

Giving up being right doesn’t mean you give up your convictions. It means honoring a multiplicity of viewpoints. Rumi says, “Somewhere beyond right and wrong, there is a garden. I will meet you there.” For couples, this garden is their relationship.

Both partners take a few minutes to come up with a conviction of their own. The Speaker shares their top conviction and why they feel so strongly about it. Then the Speaker reverses the conviction and imagines how the reverse might be true. How does it feel to do this? What would it feel like to give up the need to be right about this conviction in an argument with your partner?

SPEAKER: The conviction I chose is “Life is about having fun.” I get nervous when relationships stop being fun and happy and get bogged down with heavy emotions and conversations. I’ve always struggled with this belief of mine that “Life is about having fun,” because as soon as you get emotional or serious, I feel like we’re going down a path toward unhappiness.

The opposite of this belief would be “Life is not about having fun,” or “Life is serious.” So I can see how this might also be true. Life can be challenging, hard, and unpredictable. It makes me sad when I think that. Maybe that’s why I want life to be all fun and no work. I don’t like feeling sad.

LISTENER: Thank you for sharing one of your convictions with me, and for being willing to see that the opposite conviction can be just as true as the one you believe is right.

***
From No More Fighting: 20 Minutes a Week to a Stronger Relationship by Alicia Muñoz © 2018 by Alicia Muñoz. Reprinted in arrangement by Zephyros Press.