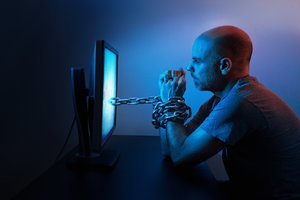 When I began counseling in the mid-1970s, cases like Scott's were rare and almost inconceivable. Hardcore pornography was difficult to obtain. But in recent decades, new electronic technologies, such as cable television, computers, and iPhones, have transformed it into a product that's available to anyone—anytime, anywhere, and often cheap or free. It's become a substantial part of our economy, boasting annual revenues in excess of $13 billion in the United States and $100 billion worldwide.

My perspective on pornography underwent a shift in the early 1980s, when, as a newly married and practicing clinical social worker, I started specializing in sex therapy. I'd initially worked as a drug-and-alcohol counselor, but switched to sexuality counseling when I noticed a strong connection between people's self-esteem and self-confidence and how good they felt about themselves sexually.

Sex therapy was a new, exciting, and much-needed clinical specialty, providing solid information, advice, and a safe place to discuss and get help for a wide array of sexual-functioning problems and concerns. Leaders in the field—people like William Masters and Virginia Johnson, Lonnie Barbach, Helen Singer Kaplan, Joseph and Leslie LoPiccolo, and Bernie Zilbergeld—were opening doors and providing information that had long been needed.

I began to consider pornography as an intervention that could be used for educational and therapeutic purposes. In sex therapy manuals, trainings, and conferences, it was touted as a product that could help clients reduce inhibitions about sexual practices, avoid boredom, and spice up their sex lives. It was considered "harmless visual stimulation"—an easy way to expand sexual awareness and safely explore sexual fantasies and desires, inside or outside a committed relationship.

A Cousin of Sexual Abuse

At the same time I was experiencing personal concerns, many of my clients began complaining about pornography. They appreciated well-made, instructional, sexual-enrichment books and videos and sexy romantic novels, but their contact with pornography often left them feeling "dirty," sad, disgusted, or angry. They told me they were turned off by its lack of human caring, its racism, and especially the way it depicted women and children as targets for sexual exploitation.

A Threat to Public Health

I never wanted to be out beating the drum against pornography. In the beginning of my career, if anyone had suggested I'd be here now, I'd have laughed at them. But from my own clients, my research, and my personal experience, I've come to the conclusion that pornography is moving from an individual and couples' problem to a public health problem, capable of deeply harming the emotional, sexual, and relationship well-being of millions of men, women, and children.

This blog was taken from something published nine years ago?! Much has been learned and perspectives formed since this was first published. It's disappointing this content is not updated to reflect this and could be damaging. Very disappointing.

Anything at all can be used in a self-destructive manner. It's not the porn that's the problem, just like it's not videogames, gambling, food, and anything else that's the problem. It's the self destructive behavior that's the problem, and self-destructiveness stems and from the relationship of family members with the extended kin group as well as with the ambient culture culture, generating shared intrapsychic conflicts. People who are supposedly out of control with something somehow manage to exert control over their "addiction" all the time but everyone pretends like they don't - otherwise drug addicts would all overdose soon after becoming addicted, be high 24/7 whenever the substance was available, and 12 step programs would never ever be able to help. "I can control it any time I want to" is not denial, it's the truth. Addicts don't want to. Did you ever notice that the subject of every 12 step program is something Puritans hate? Video games = sloth, overeating = gluttony; gambling, drugs, and of course SEX. There aren't any 12 step programs for workaholics that I've ever seen. This is not a coincidence.