How To Stop Couples Conflict Before It Even Starts

...And the Five Life Factors That Contribute to Intensifying Anger Arousal 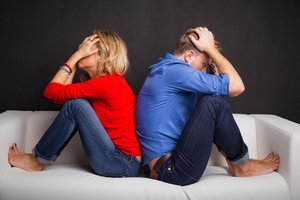 It's one thing to help an easily incensed individual learn to manage a too-easily-aroused temper. It's entirely another thing to help partners in a troubled relationship deal with the kind of anger that gets triggered primarily when they're with each other. Yet therapists often focus too narrowly on helping individuals manage their personal anger, rather than helping partners reduce the anger that repeatedly arises between them.

Partners riding this merry-go-round of anger almost inevitably blame each other for the problem. Typically, one or both portray the other as having "started it," ignoring the fact that their conflict occurs within a system of two. The partners pass the anger back and forth like a shared virus.

My Way or the Highway

Adam and Sarah sought my help after what Sarah called "years of fighting over nothing," which had sapped the life from their marriage. Sarah, 38, told me her anger was triggered only by Adam's temper. "I'm fine with other people," she said, adding that the only time she got mad was when she felt Adam had invaded her space. "With him, it's always 'my way or the highway.' He gets extremely loud, intense, and sarcastic when we don't do what he wants, when he wants it."

When I asked her how she usually reacted when Adam got angry, she looked embarrassed. "Lately, I've been telling him off," she admitted. "I can't take any more of his loudness and aggression. Last week, I screamed at him to 'shut the hell up' in front of our children. I don't want to act this way, or for them to turn out like him!" I asked her if she'd be willing to be a part of the treatment, even though she believed Adam's anger was the main problem. Although she wasn't sold on this idea, she agreed when I told her that she needed to learn to change the way she reacted to Adam's anger to help defuse it early, and to feel better herself.

Adam, 41, informed me right away that he'd do anything to save his marriage. He came from a family of shouters, he said, and often listened to his parents argue well into the night. While he'd vowed not to be like them, he found himself all too often "losing it" with Sarah—yelling and saying things he later regretted. But he saw his wife as a big part of the problem: "If she'd just leave me alone when I get stressed out, I wouldn't get so mad. She needs to learn to back off." He blamed much of his anger on stress resulting from long hours working for a demanding boss at a large insurance company. By blaming his wife and his work, he externalized his feelings. Like most of my angry clients, deep down, he believed that his anger originated outside himself.

I met with Sarah and Adam individually for three sessions to identify their individual patterns of anger arousal—the physical sensations each experienced when anger was triggered. From there, the focus shifted to specific strategies to derail their arousal pattern before they became so angry that calming thoughts and self-control were difficult or impossible.

In my first individual session with each of them, I asked each one to keep an anger log, recording the situations when anger was experienced, the thoughts or "self-talk" that arose in their minds, their body sensations (tight shoulders, heat in neck and face, jaw tension), and the actions or words they used to express their animosity. The logs and my clarifying questions helped me identify their triggers: the actions or statements that seemed to instigate arousal. As partners become aware of specific triggers, they can "preview" an upcoming encounter to think ahead about how to manage their temper, if it arises.

To assess how each got triggered, I reviewed what I call the "Five S's"—life factors that contribute to instigating and intensifying anger arousal. These include: inadequate Sleep; ongoing life Stress; not eating properly, or inadequate Sustenance; use of Substances like alcohol, caffeine, or other drugs; and any health issue or Sickness that increases irritability (a bad cold, headache, lower back pain). Adam told me, for example, that he often stayed up until 1:00 a.m. to have some time alone, yet arose at 6:00 a.m., getting only five hours of sleep. He agreed to begin pushing his bedtime sequentially earlier by about 15 minutes a night, to work toward a 10:00 p.m. bedtime. We discussed making the bedroom extra dark to further aid sleep onset.

Adam's stress level was heightened by his feeling that he had to work late to avoid a threatened layoff. We discussed a variety of coping strategies, including work breaks, a power nap, relaxation techniques, and ways to challenge scary self-talk—"How will I support my family?" "What if I can't find another job?"—which fueled anxiety and sometimes contributed to insomnia. He told me he often skipped lunch or grabbed a snack from a machine, since he felt he was too busy for a meal. I encouraged him to take at least 30 minutes to eat a healthy lunch to sustain his blood-sugar level, since low blood sugar is related to irritability and general disinhibition.

Sarah's Five S's included drinking wine with Adam in the evenings, as well as frequent headaches, which fueled irritability and negative self-talk. I encouraged her to limit her alcohol consumption and to seek medical guidance for her headaches.

At this point, I taught both Adam and Sarah to employ an easily remembered protocol for dampening arousal, which I call the Stop method—Stop, Think, Objectify, Plan. The first step to controlling anger is to reduce initial arousal by internally stating the self-instruction to "Stop!" while mentally picturing an image and/or hearing a sound associated with cessation. For example, Adam would imagine a bright, red stop sign and his father's voice saying "Stop immediately!"

Next, to derail anger escalation, it's helpful to ask clients to sit down (assuming a physical position the brain associates with safety) and engage in deep, diaphragmatic breathing. Adam and Sarah learned to sit in a fully relaxed position while practicing a version of diaphragmatic breathing and exhaling to a slow, internal count from 10 to 1. The acts of sitting and consciously breathing interrupt angry thoughts, because they focus attention on these tasks. Each was instructed to continue taking relaxing breaths as needed until his or her anger signal diminished.

I then encourage each partner to focus on his or her most upsetting, angry thoughts, which usually sprang from common cognitive distortions. Some examples include: mindreading—"Sarah just loves to get me mad, so she can accuse me of being irrational"; personalizing—"Adam's fury isn't about his stress: it's to put me down!"; overgeneralizing—"Adam can never cool it: he's always just on the edge of losing it"; and thresholding—"If Sarah corrects me in front of the kids one more time, I know I'm going to lose it." These distortions trigger fight-or-flight instincts and associated arousal, making it critical to develop the ability to step back and look at the situation through a more objective and calming lens.

After quickly identifying one or two distortions prominent in their thinking, each learned to rebut and replace anger-arousing thoughts with affirming facts. This is called objectifying. I typically teach clients a strategy I call "camera checking" to focus them on the observable facts of the anger-inducing situation. By emphasizing the facts, rather than perceptions colored by resentments, experiences, or faulty beliefs, partners learn to avoid demonizing and personalizing the other's words and actions.

Next, each partner is encouraged to think of an immediate plan, focusing on the facts of the situation. Having a plan reduces perceived threat by increasing one's sense of control. Adam's plan was, "I'll suggest we table this until I feel less exhausted," or "I'll look at her and listen until she expresses her ideas—seeing them as information and not criticisms or put-downs."

Therapy often involves entirely too much talking about new skills the client should put into place, but not enough rehearsing. Clients often understand well enough what to do when life challenges arise, but often can't recall and enact new skills in the heat of the moment. Accordingly, new coping behaviors need to be rehearsed enough to be automatic. I spend a full session with each partner, role-playing how to implement the Stop in mock situations of provocation. I model how to use the Stop, and then we reverse roles and have the client use it in the heat of role-plays that enact the most difficult and volatile situations each client can imagine.

Making a Commitment to Change

After Adam and Sarah had experienced applying Stop techniques, I met with them together to put these skills into practice. Adam echoed the doubts of most clients at this juncture: "I still feel that I'm going to lose it when Sarah and I really get into it. How can I remember to do all this stuff when the heat gets turned up?"

To segue into the next phase of our work, I asked them to discuss together the words and actions that had most quickly provoked anger escalation in the past. For Sarah, it was when Adam raised his voice, approached within two feet of her, and told her she was incompetent as a wife and mother (using words like lousy, lazy, and weak) and criticized her in front of the children. Adam responded strongly when Sarah raised her voice, questioned his sanity ("You're nuts!" "You need help!" "I'm going to have you put away"), refused to speak to him for hours, and threatened divorce. They were encouraged to discuss how they felt when these threatening behaviors were directed at them, while their partner listened without interruption.

I asked each to make a commitment to change, based on what they'd learned in the individual sessions and from each other. Which behaviors were they willing to alter? Which behaviors would they agree to substitute when angry? I helped them be as specific as possible, to ensure well-defined, practical, and measurable goals. Adam agreed that when conflict arose, he'd sit down and use a softer voice, tell Sarah what behaviors he wanted her to alter without resorting to name-calling, and do all this in private. As in other cases, I said that if they wanted to, they could write down and sign their commitments to each other as a contract.

As Adam and Sarah practiced using Stop with me, they not only became more proficient in derailing their anger arousal, but also less reactive to each other. Just as exposure training reduces anxiety to feared situations, these rehearsals helped them feel less threatened as they learned new ways of responding to old anger triggers. They felt more prepared for the next provocative encounter and more relaxed about how to handle each other's actions.

This blog is excerpted from "Stop the Merry-Go-Round," by W. Robert Nay. The full version is available in the November/December 2010 issue, The Wounds of War: Returning Vets Are Challenging Us to Rethink Our Approaches to PTSD.