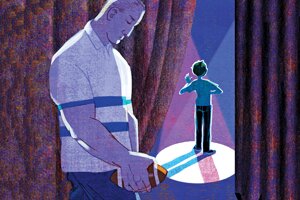 "Why Won’t You Like Sports?" The Father–Son Struggle with Gender Expectations


Stand on the sidelines at any Saturday morning Little League baseball game and you’ll see at least a couple of boys looking as if they wished they were anywhere else. They’re the ones counting clouds in the sky, hoping the balls never come their way. Many of them are there only because a parent wanted them there.

These non-sporty boys don’t exactly align with the standard-issue, high-octane, risk-taking, heat-seeking missile of a kid many parents in this country envision when they think of having sons. I myself was the parent of a non-sporty boy, Jake—who’s now a non-sporty man. His dad and I were fine with his not liking sports, but we weren’t so sure about the rest of America. This was in the early 2000s. In the years since, there’s been a massive cultural shift in gender expectations, but even so, many parents remain wedded to more established gender roles, especially when it comes to their own kids. What’s more, in addition to being influenced by their peers’ values, elementary- and middle-school-age kids are heavily influenced by their parents’ values, and they’ll judge other kids accordingly—meaning a boy’s nonconformance with traditional measures of masculinity can quickly set him apart from the other boys on the block.

That’s exactly what happened to Jake when he was barely out of first grade. He’d spend mornings at the bus stop standing with the girls while the other boys played football. Recess was no picnic for him, either. I don’t even want to…