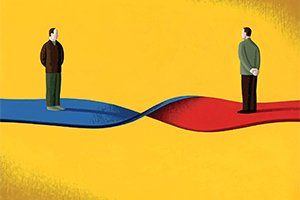 
Every family is full of ghosts, though some—like mine—are more haunted than others.

One ordinary day last year, I was taking a nap when my partner, David, poked me awake and tried to hand me my laptop computer. “You’re not going to believe this,” he said.

“Now,” he told me. David tapped the screen, and an email appeared from someone I didn’t know, a Jim who lived in Phoenix. It explained that his mother had found a book of mine online (a memoir about hiring a detective to track down my long-lost father), realized I was looking for her ex-husband, and passed the book along to her son. Jim had read the book, done the math, and deduced that we had the same missing father. “He married my mom the year after you last saw him,” wrote Jim. “Then he disappeared when I was five, a year older than you were when he took off.” Jim added that he’d always wanted a brother and that finding me was a “dream come true.” He was an only child with no paternal relatives. The polite note ended with an apology for having contacted me out of the blue, and an invitation to connect if I ever wanted to.

I closed the computer and caught my breath. David was waiting for a reaction; I had no earthly idea what to say. A thousand emotions attacked me at once. I’d been sure that my father story was over—that this unfinished book was finally closed. The last time I’d seen my father was the night he’d come back to kidnap me, when I was four. I was watching…