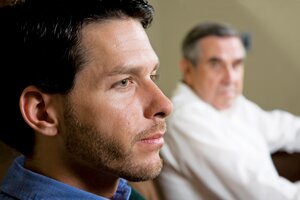 
For years, Lori Gottlieb has been addressing people’s relationship difficulties in “Dear Therapist,” her thoughtful and clinically astute Atlantic magazine column, and in her weekly podcast “Dear Therapists.” She’s the bestselling author of Maybe You Should Talk to Someone and a new workbook, Maybe You Should Talk to Someone: A Toolkit for Editing Your Story and Changing Your Life.

Here, she offers her view on working with clients navigating a particularly fraught relationship difficulty: estrangement between a parent and a child.

How much of estrangement comes from a parent’s good intentions not having their desired effect on a kid?

Lori Gottlieb: Often, adult children who are estranged from a parent will say things like, “My parent is so critical that I can’t be around them.” Rarely have they considered that what they perceive as critical, the parent perceives as trying to improve their child’s life by offering feedback. In the parent’s view, if their kid wears their hair a certain way, or marries a certain kind of person, or takes a certain kind of job, they’ll have a better life.

Parents don’t fully understand that, by offering this “feedback,” they’re devaluing their child’s life choices, way of being, and ultimately, the essence of who they are. Most parents don’t see themselves as ever having been controlling or enmeshed with their kid. They’ll tell their therapist things like, “I always did my best! Why is my child doing this to me?”

In turn, a child may say they cut off the parent to protect themselves, but estrangement is also a powerful way to express anger. Cutting off a parent is basically saying, “The only way I can express to you how hurt I am is to cut you off. Now you’ll experience some of this hurt, and maybe you’ll wake up.”

In our culture, it’s common to think, This person isn’t serving me, so I’m going to get rid of them. We’re told that this is empowering. But many children don’t realize how significant it is to cut off a parent, and that’s why it’s a decision that really needs to be reflected on. The effects are far-reaching. People sometimes don’t realize that how they feel about being estranged from a parent at age 25 might be very different at age 35 or 50. Grandchildren may miss out on the enriching experience of knowing their grandparents, because a parent can be very different around grandchildren than they were around their own children. That doesn’t mean a person should remain in an abusive family situation—just that we can help clients ask themselves: Can I manage this relationship differently? What else can be done? Can I shift my expectations so I can take in what my parent is offering, and do some grief work around what they’re not?

Where do you start with a parent who’s been cut off by a child?

Gottlieb: I start from a place of compassion and an exploration of their own experience of childhood. What did they not get? What made them have certain limitations as a parent? Obviously, many parents who have difficult relationships with their children had difficult relationships with their own parents. The irony is that they probably said to themselves, “I’ll never do to my children what my parents did to me.” But if you haven’t worked through whatever you went through as a child, you’ll end up replicating it in various ways, even if you think you’re doing the opposite.

Helping parents process their childhood pain isn’t easy, especially because they often don’t want to go there. They’ll say, “That’s in the past; that has nothing to do with this.” I’ll respond with, “When you say that, I feel how your child probably feels when they come to you with something difficult. I think if you can talk about this, it’ll be easier for you to handle what your child has to say to you.”

Parents need to see that it doesn’t matter if they agree with their kid’s perspective on how things were. There’s no point in arguing about the truth of the child’s experience, because both the experience of the parent and the child are true to each of them. And the parent’s listing all their reasons for doing what they did just replicates the child’s early experiences of feeling that the parent wasn’t seeing or hearing them.

Sometimes the parent feels so much shame that they can’t even acknowledge that they may have hurt their child in some way. I make sure they understand that I don’t think they’re a bad person; I tell them that I know they did their best. Then I try to help them work through the shame so they can imagine what the experience of being parented by them might’ve been like for their child. I present this in a way that doesn’t feel like, “Here’s what you did wrong,” but instead, “Here’s your child’s experience, and the reason your child is having trouble wanting to be around you is because you often invalidate your child’s experience.”

It also helps for me to remind them that no matter how hurt or angry their child is, their child is still trying to have a relationship with them. I’ll say, “The point of your child sharing their experience with you is for them to feel that they can get closer to you.” When parents see that their child’s intention isn’t to attack, but to improve the relationship, that change in perspective creates a softening, an opening.

What can parents do to prepare for trying to reengage with an estranged child?

Gottlieb: They’ll need to keep in mind that their child has probably attempted to talk with them and be understood by them many times, and it didn’t go well. So the child is probably thinking that it’s going to go badly again. They’re probably thinking, I’m going to get shut down and invalidated. My parent is going to make excuses, or make non-apology apologies. And I’m going to feel exactly the way that I’ve always felt around them. Then I’m going to decide it’s hopeless and my only option is to disengage, because it’s too emotionally dangerous for me otherwise.

The best way to approach a child who may be thinking this is to write them a letter or email that says, “I know that when we’ve tried to talk about our relationship in the past, it hasn’t gone well. I know that you’ve felt unheard, and I’ve realized that I haven’t handled those conversations well. Recently, I’ve become very curious about your experience in a way that I wasn’t able to be before. I’d like to see if we can have a conversation where you tell me more about your experience, so I can truly understand. If you’re not ready, that’s okay, but I want you to know I’m here if and when you are.” Most of the time, this is exactly what their child has been longing for years to hear. They might not trust it yet, but it’s a way to establish that the parent is willing to do something different.

I strongly suggest that parents trying to reestablish a relationship with their children be in therapy, because they’re going to need the support. Most parents made lots of sacrifices for their kids, and they’ll be activated by the things that their child says in this process. In these conversations, the therapist needs to help the parent silently hold onto the understanding that “you’re hurt, and I did some good things.” It’s not productive to explain their choices with lots of “but this” or “but that.” Their job is to listen, especially in these early stages.

As therapists, we can help by encouraging parents to find compassion for themselves, so they can manage those moments when they have the very human need to rebut or defend themselves instead of holding the both/and of their parenting—I wanted to be a good parent, and in certain ways I hurt my child. We can help them to forgive themselves even if their child doesn’t, and to see this as an opportunity to heal themselves and also heal their relationship with their child. We can encourage them do their own work ahead of time, which is the best preparation for these important conversations.