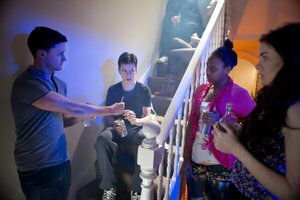 
Q: When I work with teens, I worry their parents will be upset if I don’t strongly discourage potentially dangerous behavior (sex, drugs, tattoos, etc.). How can I address the consequences of their choices without judging or lecturing?

A: Ah, the challenges of working with teenagers! Officially, your client is the adolescent, but since so many people have a stake in the process, it can often feel like parents, school personnel, extended family, and even the larger community are peering into the room. In such cases, therapists are understandably concerned about their liability and the professional consequences of making a mistake. At the same time, it’s important not to let that get in the way of staying focused on your client and doing what’s effective.

Consider the example of 15-year-old Sasha, who has a history of mood dysregulation, impulsive behaviors, and a wary relationship with her parents. In session, she tells you she had a great time over the weekend with friends at a party, where there was drinking and drug use. She’s elated that some of the older high school boys had paid attention to her, and casually reveals that she had sex with one of them. Although her parents had found out she was there, she’d lied to them about the drinking and certainly never mentioned the sex.

Sasha is aware that her parents sent you an email to report their concerns and let you know that she’s now grounded for two weeks. But she waves her hand dismissively, muttering that she can’t do anything to please them, and tells you she plans to sneak out to another party next weekend so she can hook up with the same boy.

Orienting Teens and Parents to Confidentiality

State laws about confidentiality vary, so it’s important to get familiar with the rules for where you practice—and to describe them to clients and their parents right off the bat. Teens are often suspicious of therapy and may have had previous experiences of adults being dishonest with them or even betraying them. Establishing a trusting relationship rests partly on orienting teens to the parameters of therapeutic privacy.

In the very first session with Sasha and her parents, even before the therapist obtained clinical information, she spoke directly to Sasha and said, “I’m looking forward to getting to know more about you and what brings you here, but before we get into that, I want to review the rules about confidentiality. As a 15-year-old, you don’t have the same rights to confidentiality as an adult has when seeing a therapist. What that means is that your parents have a right to know what we’re working on, and I’m obligated to tell them, even if you tell me you don’t want me to. Of course,” she continued, now looking at Sasha’s parents, “Sasha may not tell me some things if she’s concerned that what she says will get back to you. Therapy is an opportunity to work on problem solving with a professional, and often the problems that bring young people to therapy can be very private.”

The intention of openly addressing the paradox at hand—teens often don’t have the legal right to confidentially, but therapy is unlikely to be productive if it’s compromised—is to put the dilemma in the lap of the family and ask them how they’d like to resolve it. Frequently, parents will jump in and say, “What you two talk about is between you.” Or they may look at you with confusion. Either way, it’s important for therapists to know their own limits regarding risk management, uncertainty, and high-risk behavior as they move into the subsequent discussion.

Sasha’s therapist proposed this: “What I’d like to do is apply the same rules of confidentiality with Sasha that the law allows for adults: I’ll break confidentiality only if there’s acute risk to her life or the life of another person, and if I suspect abuse. For other issues, I’ll use my clinical judgment, and will always talk it over with you, Sasha, before I speak with your parents.” Sasha’s parents readily agreed, relieved that her daughter would have an opportunity to work on problems with a responsible adult.

When Sasha reveals she intends to sneak out and is likely to have sex, any reasonably concerned adults will begin to worry: She’s going to destroy any chance for trust with her parents! She could get hurt, pregnant, raped! She could contract an STI! What if her parents find out I knew and didn’t tell them? It’s easy to feel anxious in this situation. As a result, the urge to lecture and go into all the reasons why this plan is a very bad idea can be powerful! But that’s not likely to get very far with Sasha.

What can we do instead? Notice these reactions, breathe, and proceed thoughtfully and with intention. In doing so, it’s helpful to remember that it’s not our role to control our clients’ behavior, make choices for them, or be responsible for the consequences of those choices. It’s our role to help them evaluate all sides of a situation, assess the possible outcomes of their choices ahead of making decisions, and remind them of their overarching goals and our investment in helping to reach them. When done effectively, it’s likely to create some internal conflict that allows Sasha to explore her options in greater depth.

Indeed, teens are all too familiar with adults reacting emotionally and have a repertoire of well-rehearsed responses of their own to shut them out. But a calm and curious response is often so unexpected that it quickly engages them in an open discussion. Sasha’s therapist, for example, thanked her for sharing her plans and said, “Let’s talk through this and help you think about what’s important to you.”

The focus of these conversations is to identify the problem the adolescent is attempting to solve with the high-risk behavior. Teens aren’t senseless: they’re aware their behavior has risks. It’s just that the benefits appear to outweigh the risks in their minds. So it’s up to the therapist—the only person in their lives who may be willing to take a balanced approach to problem solving—to review with them the pros and cons, identifying short-term gains and losses in each category.

As with any client, therapists can’t control a teen’s behavior, but they can teach skills to improve judgment and self-control. Sasha’s therapist said, “We’ve talked about how important it is for you to have friends, feel connected, and have fun. That all makes sense to me. Are you willing to talk over the plan for this weekend? The decision is ultimately yours. I’d just like an opportunity to look at it from all angles.”

The adolescent brain is designed for risk, so it’s not surprising that Sasha immediately tried to dodge the consequences of her behavior in favor of needs for social connection and independence. The key here is helping her evaluate her risk–reward ratio. A great way to do this with teens is by reasonably mapping out in writing the pros and cons of engaging and not engaging in the behavior. With Sasha it looked something like this:

Pros of sneaking out to the party

Cons of sneaking out to the party

Being in the midst of a conflict like this with teen clients helps therapists to truly validate and see the dilemma. Also, outlining all the factors in the decision-making process allows us to help them find a middle path to get some of their needs met in the current situation without taking all the risk. This opens up a dialogue about problem solving with clients, rather than therapists talking at them.

Sasha’s therapist did it this way: “Wow, this is actually a really tough decision. It’d be really fun and freeing for you to go to this party and see this guy. At the same time, it’s been so important to you to work on building trust with your parents so you can get your driver’s permit and have them check on you less. Hmmm. I’m wondering, is there a way to preserve all your hard work with your parents and feel like you’re not totally missing out?”

At this point, Sasha and her therapist are positioned to tackle the problem collaboratively, with many paths to take from here; whereas if she’d given in to her initial urges to lecture and try to stop Sasha, they’d likely be in a stuck place. If teens still insist on making risky choices, therapists can ask them how they’ll handle things when (not if) their parents find out. By assuming parents will find out, we encourage teens to think forward to how they may feel, react, and stay skillful amid the consequences.

As difficult as it is to now leave the situation in Sasha’s hands, it’s critical that the decision be hers. By allowing her to take responsibility, we communicate trust in her ability to make her own choices and cope with the consequences, one way or another. We then have much more leverage to help her own and evaluate her choices moving forward. If Sasha chooses to replace the behavior with something less risky, the therapist will reinforce good judgment and move on to the next problem to be addressed.

Working with adolescents is certainly not for the faint of heart, but having clear strategies to use at different times in treatment can help therapists both stay focused and breathe a little easier.

Britt Rathbone, LCSW-C, treats adolescents and trains service providers as director of Rathbone & Associates. He’s the coauthor of Dialectical Behavior Therapy for At-Risk Adolescents, What Works with Teens, and Parenting a Teen Who Has Intense Emotions. Contact: britt@rathboneandassociates.net.

Going through it with them without panicking... what a good suggestion. All behaviors don't have to turn out badly. Parents have to own their anxiety and start asking questions. Those are great lessons. Thanks.