Five Principles That Build Engagement and Trust on Both Sides 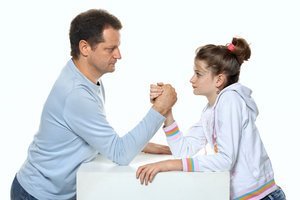 Q: I often see fathers and their daughters alternate between screaming matches and silent standoffs. How can I help them communicate through their respective developmental transitions?

Our culture reinforces this estrangement by encouraging fathers to be all-knowing, strong, and in charge. This can make matters worse for fathers who are uncomfortable with emotions, and even more so when it comes to their daughters’ transition into womanhood. Daughters grapple with a mixed message: be strong, independent, and confident, but don’t lose your femininity. This can limit a daughter’s sense of freedom to assert herself with her father, especially when there’s conflict or disagreement. Fathers and daughters still entertain a familiar vision of daughters as “Daddy’s Little Girl,” reinforcing a father’s need to protect and a daughter’s need to be protected.

This estrangement dynamic often intensifies when mothers, partners, siblings—and even therapists—intervene with suggestions, criticism, or prescriptions. While intended to help, these efforts can drive fathers and daughters further apart, encouraging mistrust and robbing them of opportunities to negotiate impasses.

Casey, an 18-year-old in her first year of college, is struggling with anorexia and cutting. She and her father are caught in a vicious cycle of control: he attempts to manage her by reminding her to take her antidepressant medication and criticizing her for bingeing. She responds by lashing out—either inwardly, by becoming silent and closing herself off, or outwardly, by screaming at him to leave her alone. Shaking his head disapprovingly, he makes sarcastic comments and storms off in frustration.

Casey’s mother, Elizabeth, uncomfortable with their interactions and frequently asked to intervene by Casey (“Mom, you explain it to him”), criticizes Bill’s awkward efforts to engage Casey: “You’re not listening to her.” Bill snaps back, “You’re always taking her side!” This escalating battle ends with Casey and Bill feeling estranged and Bill and Elizabeth more overtly at odds. Caught in the middle, Casey doesn’t learn to express herself directly with her father or to use her mother constructively as a resource in her relationship with him.

The following are the approaches that I’ve developed and used through the years that have proven to be effective in many situations like this.

Principle #1: Work with the Entire Family

A common pitfall for therapists is to work exclusively with the father–daughter dyad, leaving out the mother/partner and siblings. Isolating the father and daughter from the rest of the family risks creating a narrow focus on their relationship as the problem, rather than seeing it as embedded in the family structure. To counter the pull toward such fragmentation, therapists should work with the family as a whole and in different configurations, as needed, to disrupt old patterns and collaboratively create new, healthy interactions.

Creating in-session enactments between fathers and daughters provides therapists opportunities to track patterns of thought and behavior that maintain their disengagement. In the vignette below, the therapist creates an enactment that illustrates the symptomatic triangle: Casey begins to talk with her father about a problem she has with him. He cuts her off. She gets exasperated and rolls her eyes in Elizabeth’s direction, recruiting her mother to rescue her. Elizabeth accepts the invitation and jumps in to mediate, creating more conflict between her and her husband. The therapist, to get a clear picture of the family dynamic, encourages the interaction to play out.

Therapist: How about you and your dad talking to each other about the argument you had last weekend?

Casey: I don’t really know what to say. You just do the same thing over and over.

(Bill looks away. Casey then lowers her head.)

Therapist: Bill, can you help Casey elaborate more concretely what she had difficulty with?

Bill: Fine. What did I do wrong?

Casey: (Looking to her mother) He’s making that face again!

Bill: (Exasperated) What face? Why can’t you just talk to me?

Casey: (Turning to therapist) You see? I can’t talk to him. This never happens with Mom.

Bill: (Looking at Elizabeth and then at therapist) So it’s all me? It’s all my fault?

Casey: Dad! No, that’s not what I’m saying. You always turn my words around.

Elizabeth: (Turning to therapist) May I say something?

Therapist: Sure, go ahead.

Elizabeth: (To her husband) You do the same thing to me. Let me just tell you what she’s trying to say.

To encourage new communication patterns between fathers and daughters, therapists must establish clear boundaries between mothers and daughters. In Casey’s family, this means challenging Elizabeth to avoid taking sides in the struggle between Casey and Bill. To do this, the therapist first gains Elizabeth’s trust by demonstrating that he understands why she feels driven to mediate conflict between them.

Therapist: (Turning back to Elizabeth) I imagine you’d appreciate seeing your husband and daughter find a new way to get through their conflicts without your being their translator. Am I right?

(Therapist walks over to Elizabeth and with a mischievous smile, asks her to turn her chair away from her husband and daughter. Elizabeth laughs, joining into the playful spirit, and moves her chair.)

Therapist: (To Casey) Do you think if you open up to your father, and your mom turns around, you can still stay focused on your dad?

(Therapist invites Casey and her father to talk. Their conversation is awkward, but they talk to each other without Elizabeth’s interrupting.)

During this exchange, Casey describes her struggles. Bill listens, attempts a few times to resolve her issues, but stays in the conversation. The therapist observes that Casey has opened up to her father, and they’ve conversed without either one giving up on the other, withdrawing, or turning away.

Temporarily blocking the mother–daughter relationship gives the atrophied father–daughter relationship a chance to develop. Here, Bill and Casey have the room to look at each other, both literally and figuratively, and begin a new type of conversation that’s just between the two of them. This also allows Elizabeth the opportunity to practice being present without being central.

Many adolescent and young adult women feel torn between trying to gain their father’s approval and resenting him for being emotionally unavailable and/or trying to control them. To gain access to their father, they hide the parts of themselves they think he’d disapprove of. This bind can manifest itself in violence, like suicide attempts or cutting, or through becoming invisible to themselves and others.

Therapists can break this bind by working directly with daughters to generate alternate ways of expressing themselves. One way to do this is by cultivating a cotherapy relationship with daughters, seeking their help in restructuring the family and fostering a climate that inspires more open and respectful communication. Bolstered by a therapist’s regard for their feelings and views, daughters will be likelier to risk speaking up in a more mature and purposeful voice.

Therapist: (Turning to Casey) Do you want to talk with your dad about what you’ve been dealing with at college?

Casey: I don’t really want to talk about it. I will, but I don’t want to.

Therapist: It’s your choice. (Turning to Bill) Are you interested in knowing what Casey has been contending with?

Therapist: Casey, it’s your choice, but it’s an opportunity to share yourself.

By clarifying that it’s Casey’s choice what she shares with her father, the therapist demonstrates his respect for her, while signaling to Bill that getting to know Casey isn’t something he’s entitled to or can simply command, but something that needs to be thoughtfully cultivated between them.

In our culture, fathers are often trained to muffle their feelings. It’s commonly perceived that being a “good” father means being directive, sure of oneself, managerial, and protective; it doesn’t allow for the freedom to be vulnerable, uncertain, or to express love directly. Below, the therapist helps Bill experiment with new, more direct styles of relating to Casey.

As Elizabeth watches the mutually respectful conversation opening between Bill and her daughter, she becomes less vigilant and more inclined to trust their capacity to reach each other without her intervention. Bill begins to loosen his grip, admitting that he doesn’t know how to help. This is a significant step, and the therapist encourages it by reinforcing the message: be more interested in what your daughter is telling you than in imposing what you think would be helpful.

Casey: (Crying) I probably failed science, I’m not taking my meds, and I’m gaining weight. I just feel like shit.

Bill: Failing science isn’t the end of the world. Do you understand how much pressure you put on yourself?

Casey: (Sobbing) That’s not the point.

Therapist: Casey, could you stay in the conversation with your dad and help him understand more about what you need from him?

Casey: (To father) You’re not listening to me. You listen, but then dismiss it immediately.

Therapist: Okay, help him out. Keep talking to him. Don’t sell him, or yourself, short. Help him understand what you want from him in this very moment.

Casey: (Crying) I want you to listen to me. Just listen.

Bill: What can I do to help? (Turning to therapist) I just want to hold her.

Therapist: Is that what she needs?

This is the start of a significant shift in their interaction. Bill restrains his impulse to dictate and respects her expression of her feelings and needs. Though still tentative, Casey remains open and engaged with him and begins to use her voice to express herself.

These conversations are conflict-ridden, filled with outpourings of pain and discomfort for all family members. It’s important that the therapist not be deterred by the intensity of emotional expression, but be encouraged by the family’s ability to tolerate the growing complexity of their relationship. In such moments, the therapist’s recognition of the potential for new possibilities is pivotal to encouraging trust between fathers and daughters.

This blog is excerpted from "From Estrangement to Engagement," by Cara Brendler. The full version is available in the November/December 2011 issue, Who's Afraid of Couples Therapy: Stretching Your Comfort Zone.