Listening to the Body's Story

In Couples Therapy, Sitting With Sensations Can Have a Surprising Effect 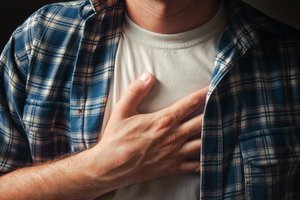 Even with two people sitting quietly, an interpersonal space isn't an empty space—it's alive with a peculiar quality. I got a measure of this quality one long day in a mindfulness-meditation retreat, when our instructor had us each pair off with someone we didn't know. He asked us to sit on the floor opposite each other and focus on the other person's face. Gently, he said, focus gently, for 10 minutes.

Ten minutes is a long, long time to look at the actual, real-live-breathing face of a person you don't know. As a matter of fact, I'm here to tell you that it's an excruciatingly long time, and that by the middle of the 10 minutes, you could hear sobbing from the people around us, also seated on the hotel carpeting and gazing into the surprising hellhole of another person's face. Eyes especially—it's true what they say about eyes being the windows on the soul. TMI, as the kids say, Too Much Information.

Plus we had to struggle with our failing interactional abilities, which seemed to be waving gamely like those giant, willowy, white-plastic columns at the used car lots, pumped up by air and wagging at customers—blathering social instincts not to stare, not to stand by while someone is consumed with anxiety; instincts to smile or not to smile; all this quickly reaching a crux, our faces distended by the wondrous strain. They say we have an inordinate number of neural pathways in the brain that are involved in that mask we call a face. I believe I felt a reddened charge in all of them.

It was a lesson in the overwhelming power of direct contact, among other things. If we leave aside, for a moment, the usual rush of judgments and projections that typically fill our relational space, we get to sit . . . with something else.

Long-term couples can trigger in each other that onset of judgment and negative prediction, not to mention blame. The space between two people who've been partnered for years can be many things—lively, dull, dangerous, robotic, cozy, crazy-making, sensible. All in the same couple!
I'm a couples therapist, more than 30 years now, and I get paid to sit in the room and watch this happen.

For example, when I asked my usual opening question, how things were going, Julia nodded her head. "Good," she said.

"There you go again," Mike commented to his wife.

"What?" Julia asked. She had a mollifying smile on her face.

"Same old stuff," he responded. "You're gonna say that things are going well. You're gonna talk about the great party we had. How well we worked together." He ignored Julia's rising discomfort. "But none of that is why we're coming here." He was a likable man, commanding and curious, yet poised just this side of sarcasm.

He shook his head. "None of that gets us one step closer to you and me. In bed." Julia's face fell.

The argument between Mike and Julia, for example, wasn't what you might think it was. At least it wasn't what I thought it was. Initially it seemed like the classic story of a man looking for sex and warmth from his wife, and then getting angry because she wasn't going along with him. Mike was angry, all right, in that shoot-yourself-in-the-foot way that upped the tension level between the two of them. Actually, though, Julia would have been happy to climb into bed with Mike. But that wasn't enough for him. Even in bed, they both agreed, he was angry.

These days, in certain intractable situations, I keep discovering how much getting couples to focus on the immediacy of their bodily sensations can change the entire flow and direction of what takes place in my office. "Slow yourself down, Mike," I said. "Can you notice what you're feeling, in your body?" This kind of awareness is a variation on the practice of mindfulness.

"Anger," he said, one corner of his mouth bent up at being obliged to belabor the obvious.

"How do you know you're feeling anger?" I asked. Anger is a catch-all word, especially for men, and the word itself, being so usual, might stand in the way of experiencing the nuances of anger, including anxiety or sadness or even trouble breathing.

Mike pointed to his chest. "Actually, I feel cold." He made a rueful smile. "It feels steely inside, like I'm holding back. Holding back a lot. Like a coiled snake. I could strike. . . . But I won't," he added.

"So how familiar is that feeling to you?" I wasn't sure whether to keep exploring the subtleties of the physical sensations or expand the context to Mike's history. But asking him about the familiarity of the sensations would keep him looking inward a bit longer.

"Hmm. Pretty familiar." He looked surprised. That was good: he was learning something from his own sensations. Plus, he was sitting there feeling them, rather than leaping into action.

"How far back does it go?" Yet another historical question. I could be leading him away from tolerating the affect, I thought.

"Childhood?" Now I couldn't resist the pull of history. It's just like me to choose the narrative rather than step into the unknown area of felt experience. But the looks of surprise on his face suggested that we were getting around the usual, possibly defensive, stories.

"Right. As long as I can remember."

From the Mind's Story to the Body's

I used to think that a lot of the power of therapy was contained in the exploration of clients' early days. I still think that. Here we could go on to talk about Mike's parents and whether they were strong enough for him, adult enough, because that was what he was asking of Julia—whether she could be strong enough to handle his disappointment, sexual and otherwise. But that would keep us tending to the storyline.

Stories often do the hard work of containing enormous amounts of meaning and intention, not to mention what we wish was true. Many times, they harden into set pieces, as any therapist or bartender can tell you, which is both the good thing (containment) and the bad thing (rigidity) about stories.

But if we can bring awareness into our own pulsing bodies, we get a chance to explore the hidden well of physical discomfort caused by our memories and emotions and our crazy defenses against that discomfort. The body, you might argue, is the unconscious. No one welcomes discomfort, but the fear of becoming overwhelmed, the fear of unleashing strange forces, of "wallowing" in negativity, can funnel our energies away from tolerating even the mildest turbulence of our felt experience.

I thought about the difficulty of "letting yourself be," rather than scrambling to put someone else in charge of your own unsettling feelings. For example, in one session with Mike and Julia, I looked into Julia's face and saw how dismayed she was. We spent the rest of that session experimenting with the specific physical sensations she felt. "Slow down," I said once again, pointing downward like a signalman on the road. "Just notice what's actually going on in your body." At the same time, I found myself distancing from the vigorous charms of Mike, as I tried to size up how disturbing he might be to her safety. I finally came to understand, as she did and then he did as well, that what she was feeling was fear.

"It's like I can't think. I'm helpless. All I want to do is get away," Julie said. Her fear had been a great undertow, not named or felt until we'd reduced the speed of exchange between the two of them. Mike's large exuberance, his energetically held ideas, had daily stimulated Julia's fear. But, in truth, she realized, collapsing in fear was a habit from her childhood--a way to cope with the uproar and chaos of her family home. When Mike's intensity increased, that signaled get away to Julia.

We worked, Julia and I, for several sessions on how she might be more mindful of those signals to flee; how she might hang out with them, develop a tolerance for what had heretofore been a desire to retreat pell-mell. What is it like to feel those sensations? Can she face into them, can she soften her defensiveness? Can she even soften into the sensation of numbing up, of blanking out, of resisting her own curiosity? And what's it like for those feelings to be there? Can she tolerate being on the edge of ineffable experience? Like all mindfulness practices, if we explore this territory in therapy sessions, we give up the agenda to get somewhere, to produce some specific outcome, to move on. And then we get to be present to . . . what? Our own dulled or trembling or irritable selves. Our racing heart, our tumbling stomach, our stumbling, speechless mind. Great!

I couldn't predict how Julia would use this work, as it was subtle and undramatic, but later, when she and Mike and I were puzzling good-naturedly about the sexual standoff between them, we started talking about touch.

"I massaged Mike's feet the other day," Julia said.

Presence in couples is Janus-faced, looking both inward, with an acceptance of our own reactivity and vulnerability, and outward, to the ever-enlarging intersubjective field—a field that, as it enlarges, begins to contain the vulnerability of our partner. Within a couple, when these two vulnerabilities come face to face, they create a soft spot in the relationship: a place where, if they're lucky, they'll feel opened and accepted; a place where one soft heart meets another soft heart.

I was reminded of the soft-heartedness we all felt sitting on the floor of the hotel ballroom, looking into the eyes of a stranger, weathering the gauntlet of nerves and censure. But to get there, I remember, I had to accept in myself a level of awkwardness and inadequacy that most days I'd rather not tolerate. Maintaining a loving presence toward ourselves that allows us to be open to others is no easy task either, since it requires a tolerance of our own human vulnerability.

You couldn't design a better machine to stir up these layered and tacit feelings, these vague sensations, than two people trying to make a life together. So, for many of us, the most radical demonstration of mindful living comes not in the quiet retreat house in the woods, but in facing our most intimate partners.

This blog is excerpted from "The Soul of Relationship," by Molly Layton. The full version is available in the January/February 2008 issue, Looking In, Looking Out: Mindfulness as a Path to Relationship.

It would be very interesting if we could also have a summary of therapy from the clients. What was it that worked for each of them?