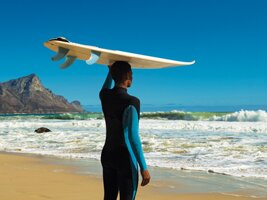 Therapy in the Surf Circle


Fifteen-year-old Ky is not feeling the stoke right now. It’s his first time out on the water with us, and he’s just gone over the falls. Positioned too far forward on his surfboard, his nose dug in and launched him face-first into a washing-machine cyclone of foam.

Going under like this is a sort of baptism for surfers, one that’ll happen over and over until he gets the feel, but Ky doesn’t know this yet. He manages to get his head above the water, hacking and sputtering before he takes another wave to the head, sending him tumbling through the whitewash again. When he finally manages to reel in the board tethered to his ankle and pull himself on top of it, he’s disoriented, coughing and clutching the board like a life raft. He’s seething.

Roberto, one of the group’s leaders, flashes us a quick look and nods in Ky’s direction. Using the silent language we’ve developed over countless Sundays on the water together, he’s saying You two stay with the group. I’m on it.

About 50 feet away, group leader Christopher lets out a primal coyote howl as two boys under his watch spring onto their boards and, wide-eyed and mouths agape, successfully ride a wave toward the shore. They flash a triumphant shaka to one another on the sand. We can hear them over the crashing shore break, roaring in…