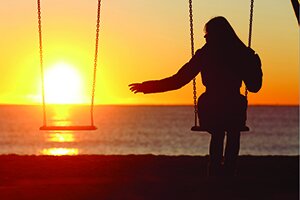 
In 1969, Elisabeth Kübler-Ross identified the five stages of dying in her groundbreaking book On Death and Dying. As a psychiatrist, she saw that patients who were dying appeared to go through common experiences or stages. Her work captured the world’s attention and would forever change the way we talk and think about death and dying. She ushered the truth of this universal experience out of shadowy euphemism and into the light.

Decades later, I was privileged to have been her protégé, friend, and coauthor of two books. In the second book we wrote together, On Grief and Grieving, which was her last, Elisabeth asked me to help adapt the stages she’d observed in the dying to account for the similar stages we’d observed in those who are grieving. The five stages of grief are denial (shock and disbelief that the loss has occurred), anger (that someone we love is no longer here), bargaining (all the what-ifs and regrets), depression (sadness from the loss), and acceptance (acknowledging the reality of the loss).

These stages were never intended to be prescriptive, and this holds true for both dying and grieving. They are not a method for tucking messy emotions into neat packages. They don’t prescribe: they describe. And they describe only a general process. Each person grieves in his or her own unique way. Nonetheless, the grieving process does tend to unfold in stages…

Thank you for this thoughtful article, David. As I'm downloading this to share with several of my clients, I'm feeling grateful for a source that understands the complexity of the grieving process. Your work is an excellent companion to my work with actively grieving clients and, more importantly, with those who are actively not grieving and need to find their way back. Donna Rigby

Thank you David for the article on grief. In my 37 years of clinical practice, I have felt that hate was not the opposite of love, as many thought. Grief was its opposite. So that in order to not grieve, we mustn’t love and what a tragedy that would be. Love is well worth the price. Thanks again. Daniel Skenderian, Ph.D. Clinical Psychologist, PSY8083