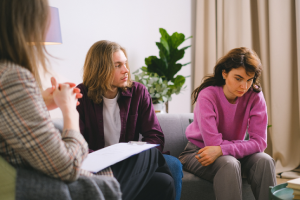 Are You There for Me?

Understanding the Foundations of Couples Conflict

On the first day of a clinical placement in my doctoral program during the early 1980s, I was assigned to a counseling center and told by the director that because of unexpected staffing problems, I'd be seeing 20 couples a week. I'd never done any couples therapy, but I did have considerable experience as a family and individual therapist with emotionally disturbed adolescents--a tough, challenging group of clients if ever there was one! So my first thought when given this new assignment was, "After what I've done, how hard can this be?" I plunged in and almost immediately was appalled by how hard it actually could be!

Revolution on the Horizon

DBT was no walk in the park: it required team treatment, including weekly individual therapy, a year-long "skills training" class, telephone coaching and supportive supervision for the therapist. But it offered clients and therapists alike a way out of chaos--a systematic clinical package that integrated the technical and analytical strengths of behaviorism, the subtleties of Zen training, the warmth and acceptance of relationship-centered therapies and the often undervalued power of psychoeducation.

Growing Up In an Age of Distraction

Is There a Crisis of Pseudo-Connection in Today’s Families?

Has the time come to consider the whether modern families lack some of the intimate connections they used to have? And, if so, what can we as therapists do about it?

The End of Innocence

Reconsidering Our Concepts of Victimhood

As a systems therapist, incest survivor, and recovering alcoholic, I've lived through several stages of our culture's attempt to come to terms with child sexual abuse--as a victim in the silent 1950s; as a therapy client in the oblivious 1960s and 1970s; and as a psychotherapist in the 1980s and 1990s, when once-dismissed accounts of abuse filled my therapy practice (and my television screen) only to be partly discredited within the decade during another swing of the cultural pendulum.

Jay Haley, who died earlier this year at the age of 83, was an unlikely candidate to become a founder of the early family therapy movement. An outsider to the field, he had no formal training in psychology or psychotherapy. Yet, if you ask family and brief therapists who most inspired them, chances are his name will be among the first mentioned, and if you ask which figure inspired the best arguments about therapy, you'll probably get the same result.

How to Talk to Kids in a Way They Understand

Connecting with today’s youth doesn’t mean being able to recite Justin Bieber’s latest hit. According to Janet Edgette, author of Adolescent Therapy That Really Works, it takes authenticity, perspective, and knowing how to make kids feel like they’re being listened to and respected.

How to Tap Into Young Clients’ Imaginations

Bobby throws temper tantrums at home and at school. His parents bring him to you for therapy, but Bobby refuses to answer questions and sits in your office during sessions with his arms folded until the hour is up. So what’s to be done?

When Every Session Mattered

The Legacy of Braulio Montalvo

In this highly charged atmosphere, no one on staff, not even Minuchin himself, was more revered for his ability to penetrate to the core of a family’s problem than Braulio Montalvo...when I asked Braulio how he’d been able to turn around the session so quickly, he simply said, “I just gave him a [new] way to be strong.” Then, characteristically, without calling any more attention to himself, he walked out of the room. It was as if we’d just been shown how to make a skeleton key to an entire city by a master locksmith.

How Being Calm and Collected Gets Us Connected

According to Martha Straus, author of No-Talk Therapy for Children and Adolescents, time-outs don’t really nip misbehavior in the bud. Instead, they often exacerbate anxiety, making kids feel misunderstood and alone. Young kids can’t self-soothe and regulate emotion like adults can, Martha says. That’s why, in these sorts of situations, she says we need to turn to co-regulation, “loaning” our limbic brains and emotional stability to help kids feel attended to and comforted.