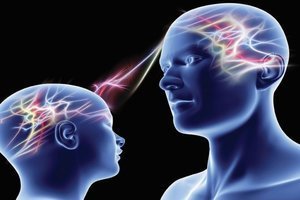 This article addresses one of my pet peeves. People often say parents need to connect with their children and therapists with their clients right brain to right brain. The author points out, "This left-brain system is keeping Sarah in her brain’s approach mode, fully engaged with Vincent, and is activating her brain’s reward system as well." Generally a whole brain is better than a half brain. The left brain keeps the mom in approach mode and when the child is in distress a healthy right brain can recruit empathy areas (dorsal medial PFC???). When we can help parents experience their distress reactions to childrens' reactivity in session, then we can be the good parent, helping them observe their distress (with their insulas?) until they regain calm and there is sufficient blood in their forebrains to gain new insights. To do this we are providing oxytocin and our own sustained attention (from the dorsal anterior cingulate gyrus?). Parents reactivity needs to be processed before they can follow parenting guidance.

My question after reading this article is how to help the relationship improve while not diminishing the relationship between the mother and father. This chemical issue while very important between parent and child, can affect the relationship between the two parents. Many mothers, in particular have mastered this reciprocity between mother and child but it can and often does, diminish the relationship with the parents. The oxytocin takes over and does not allow the phenylalanine to help the couple regain their closeness as they had before, not to mention all the other dynamics that impact a marriage. Even with education the couple cannot often pull off the earlier bonding they had once the child becomes the center of their world and even though it requires a great balancing of these hormones, it seems to not be as easy to maintain a healthy balance. Then not one wins in the long run, so any advice you have regarding this balance, please respond. Thanks

Great article can I use this for teachers