The Legacies of Cultural and Historical Trauma 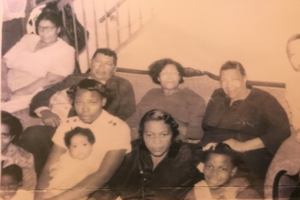 My name is Anita Mathilda Abram Mandley. That’s me peeking out from the lower left-hand corner of the picture. I’m with my great grandfather, great-great aunts, a great aunt, an aunt, my grandmother, and my cousins at my grandmother’s house in New Orleans. This picture was taken about 63 years ago, but I can still remember the feeling of unconditional love and safe connection in that room.

I grew up in a large and loving extended family. My great grandfather and his sisters were part of a sibship of 13 born to parents who were enslaved. Their father, owned by nuns at The Convent of the Sacred Heart in Louisiana, fought in the Civil War in the Corps d’Afriques and the Spanish-American War. Their mother grew up on a plantation in Tensas, Louisiana, the daughter of the plantation master and one of his slaves.

I’m a psychotherapist specializing in complex and developmental trauma, and I’m writing this in honor of all my ancestors.

About 12 years ago, I was working with a Jewish woman in her late 40s who’d experienced a lot of boundary violations and invalidation in her life. Her parents and grandparents were hypercritical, especially of her appearance, and her parents’ high-conflict relationship and patterns of poor decision making had left her with deep emotional wounds. As she left a session one day, she turned to me and said, “It’s so good to be working with a therapist who’s also a survivor.”

My initial impulse was to tell her, “Oh no, I’m not a survivor. I’ve never personally experienced trauma.”  But over the next few days, fragments of vivid images from the past started bubbling up, knitting together to form a movie-like memory that delivered a painful truth.

It starts with me sitting on a low stool, my grandmother in a chair behind me. I see our small black-and-white television. The newscasters Chet Huntley and David Brinkley are reporting the bombing of the 16th Street Baptist Church in Birmingham, Alabama, which killed four little girls. Those girls had gone to Sunday School, just like I did. They were killed in church, and I’d been to church that morning. Three of the murdered girls were 14 and one was 11. I was 11. My conclusion was that there were people in the world who wanted me dead without even knowing my name.

I am a survivor—a survivor of cultural and historical trauma.

Since that day, I’ve continued to have memories bubble up, expanding my awareness of what I carry inside. I now understand why and how I can get activated listening to my clients’ stories, and I acknowledge without shame the bias I carry in my nervous system. I regulate that bias now to stay in empathic resonance with clients. I’m less likely to merge with those from disadvantaged backgrounds or histories of cultural oppression, or to disengage from clients who have a lot of privilege and socioeconomic power.

There’s a principle in Buddhism about changing karma into mission. My karma is to carry the history and DNA of slaves and Native Americans, people and tribes who’ve experienced unspeakable oppression, trauma, and disenfranchisement. To understand my mission, I studied Joy DeGruy’s Post Traumatic Slavery Syndrome, a theory grounded in the multigenerational oppression and trauma of Africans and their descendants in this country. Then I broadened my focus to the histories of Holocaust survivors and their descendants, as well as the plight of Japanese Americans interned during WWII. I read about the epigenetics of trauma and how it’s inherited. Once I became curious about how historical trauma impacts my clients, I realized how much of their stories I’d been missing.

I’d been seeing one client for six years when I began reading about the changes in DNA and RNA that can result from chronic traumatic stress. She’d had a successful career in sales but struggled with self-injury, cocaine and alcohol dependence, autoimmune diseases, and depression. Her younger brother was born with diabetes and had struggled with substance abuse before his death. Her parents were emotionally and physically abusive Austrian immigrants and alcoholics. Her mother and her mother’s family were captured by Nazis but somehow escaped to Turkey. Her father was captured by the Russians and held in a labor camp. Neither parent was ever treated for trauma.

When I told her what I’d learned about the intergenerational transmission of trauma, her eyes filled with tears. “You mean this is not all my fault?” she asked. I could almost see layers of shame fall away. Her parents had devalued her all her life, and her previous therapists had only underlined her thinking errors and bad behaviors. Now, she was being presented with the possibility that her distress and actions weren’t some kind of character flaw. Given this new paradigm, she soon let go of some of her problematic behaviors, took better care of herself, and started seeking out activities that were meaningful to her. Her shift was a stunning example of the power of providing an expanded context for what our clients and their families are carrying.

I’ve since learned the benefits of directly asking clients about their family and historical traumas. Take my client who returned to therapy when she began physically assaulting her boyfriend, who she worried was being unfaithful, in a dissociative rage. Before each episode, she noted intense activation in her abdomen. We started with somatic therapies, but one day it dawned on me that I’d never asked this client, who was Jewish, if any of her relatives or ancestors had been through the Holocaust. When I did, she said no, her family had been in the U.S. long before the war. But then she got a faraway look in her eye and began to tell me how her family’s synagogue had often invited Holocaust survivors to speak about their experiences.

One story she heard from a survivor involved a horrendous form of torture to a woman’s abdominal and pelvic cavities. Because she’d heard this and other horrors of the camps at such an early age, her brain and nervous system had been wired around these vicarious traumas, and her aggression was likely an attempt to manage feelings of powerlessness in the face of threat. Integrating this new awareness helped her shift from a place of negative self-judgment to one of openness, where she could more readily learn skills for self-regulation and see that threats from the past weren’t happening in the present.

I not only have an expanded vision of trauma these days, but an increased sense of mission to help other therapists see the larger context of what we carry inside. It’s not a matter of dredging up a painful past, but of normalizing our interconnectedness and the emotions and behaviors that come out of it. No matter how far removed we may feel from our ancestors, this kind of awareness makes other interventions far more effective. It’s work in the here-and-now that also honors the history that’s shaped us, resiliency and all.

Anita Mandley, MS, LCPC, practices at The Center for Contextual Change, where she focuses on clients who’ve experienced trauma. She’s the creator of Integrative Trauma Recovery, a group therapy process for adults with complex PTSD.

Your article in the Networker touched me profoundly, especially as the child of Holocaust survivors. If you could do therapy here in California, I would certainly refer. Thank you, Hedy

Anita, Thank you for this beautiful, compassionate, and easily accessed wisdom. I hope you continue to write - and I'm grateful you became a therapist, Julie

An important article, thank you Anita and Networker. By giving honor and making space to honor the trauma and resilience of every client, we make space in the world for the respect for others' historical traumas. An example of what we are missing more and more in our present day world. Beautiful to read how you do this cross culturally showing how healing the therapeutic presence can be.

Anita Mandley’s Message pieced me to the core. I finally feel like someone “gets me”. My mother experienced horrible abuse at the Indian boarding school and later in her life told me her story. It resonated in me like a drum beating in my core. It made sense of the “why” of her personality and “why” as an accomplished artist she never would admit to the strengths of her abilities. Patricia (July21, 2019)