A Three-Part Exercise to Create Safety and Trust 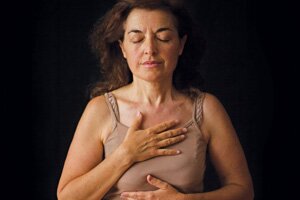 The fundamental premise of Polyvagal Theory is that human beings need safety, and our biology is fiercely devoted to keeping us out of harm’s way. As most therapists know, the body’s rapid-response survival system is orchestrated by our autonomic nervous system (ANS). To briefly review, the ANS operates two branches: the sympathetic and the parasympathetic. The sympathetic branch mobilizes us to defend against danger via the fight-or-flight response. The somewhat less understood parasympathetic branch is typically viewed as a unitary system that helps us lower our defenses and regain a state of calm.

But, as they say, it’s a bit more complicated than that. The parasympathetic system is made up of the vagus nerve, which starts at the base of the skull and winds its way down the body to the abdomen. It branches into two major pathways, each responsible for a distinct neurophysiological state. One pathway, known as the ventral vagal, responds to cues of safety and supports a sense of centeredness and readiness for social engagement. By contrast, the dorsal vagal pathway responds to cues of life-threat, causing us to shut down, become numb, and disconnect from others. A client who dissociates has found refuge in a dorsal vagal state.

Importantly, these cues for safety and danger operate beneath our awareness. The three elements of our autonomic nervous system—ventral, sympathetic, and dorsal—act as our largely subconscious surveillance system, working in the background to read subtle signals of safety or threat. Stephen Porges coined the term neuroception to describe the way our ANS scans for cues of safety and danger without any assistance from our thinking brains. For example, if you enter a loud, crowded party and see strangers huddled together, laughing, you may unconsciously pick up cues of rejection. In a micromoment, your sympathetic nervous system leaps into action, signaling you to turn around and leave the party posthaste, or perhaps head straight to the buffet and fill a plate.

Just then, you notice one of the guests breaking away from the crowd and walking toward you. She extends her hand and introduces herself, her face open and welcoming. Almost instantly, your breathing slows, your heart rate goes down, and your body relaxes into the experience of Ah, I’m safe now. Your ANS has just guided you from a sympathetic state to a ventral vagal one, permitting what Porges calls your social engagement system to come fully online. You’re now calm, ready to connect—and maybe initiate a new conversation.

From a polyvagal perspective, a key goal of therapy is to help the client find ways to move out of a dysregulated state—either a numbed-out “dorsal vagal” state or a hyperaroused “sympathetic” one—and return to “ventral vagal,” the biological seat of safety and connectedness. And because we can change our dominant life story only from a place of ventral vagal, it’s crucial for both therapist and client to be able to accurately identify the state of their own nervous systems at any point in time—both in the therapy session and out in the wider world. Only when individuals are able to recognize their location on the polyvagal map can they begin the journey back to calm and connection.

Notice that I said both therapist and client must become aware of their autonomic states. That’s because emotional healing can only take place when clinician and client establish a trusting nervous-system-to-nervous-system connection. Subconsciously, clients are continually picking up subtle cues from their therapist via tone of voice, eye contact, body postures, and facial expressions, from a slightly wrinkled brow to a particular movement of a hand. Throughout the session, clients are constantly reacting to these signals with sympathetic activation, dorsal shutdown, or ventral openness and trust. So from a polyvagal perspective, healing client–therapist relationships require therapists to know their own ANS and learn how to regulate it in the moment, in the midst of any session.

Getting to Know Your Nervous System

Today, most people come into therapy with a general understanding of the concept of “body-mind,” the notion that their physical and emotional selves work in concert. But I’ve found that relatively few people understand the precise ways in which the body creates emotional experience, in turn prompting individuals to behave in predictable ways that create and perpetuate a story about themselves and the world they inhabit. That’s why I help clients create a clear map of their own autonomic nervous systems, so they become aware of their patterns of response to ease and distress.

Following some brief psychoeducation about the three parts of the ANS, I ask my clients to create a personal profile of their own. I suggest that they imagine their nervous system as a ladder, with ventral vagal at the top, sympathetic in the middle, and dorsal vagal at the bottom. (Here, I provide a worksheet with an image of a ladder.) Clients start by writing down their typical feelings and behaviors when they’re in a sympathetic state, often using words and phrases like out of control, angry, confrontational, fearful, and desperately seeking. They do the same for their experiences of being in dorsal vagal, which may include silent, out of focus, numb, hopeless, helpless, shut down, and feeling abandoned and unwanted. Finally, they recall times of being firmly planted at the top of the ladder—the ventral vagal zone. These typically include such descriptors as openhearted, engaged, curious, and playful.

I then ask my clients to complete their personal profiles by finishing two sentences for each state: “I am...” and “The world is....” Most clients are astonished by the dramatic difference in their core narratives, depending on the zone they inhabit. In a ventral state, people typically characterize their story as something like “I belong” and “the world is welcoming and filled with opportunity.” In sympathetic, they may say, “I feel crazy, panicked. I’m trapped in a world that’s unfriendly and scary.” When in dorsal, the response is something like: “I’m invisible, unlovable, lost, alone. The world is cold and empty.”

Now clients have both a mental picture and a language for their “ladder” of ANS activation at any given moment. Importantly, client and therapist now share this language, so that during a session they have a useful shorthand for noticing, naming, and addressing these ever-changing states of arousal. Over time, we want to help clients shift their default ANS setting from a place of danger and distrust to a state of openhearted safety.

Yet before going further, I want to emphasize that the polyvagal perspective is by no means a replacement for any particular model of therapy. Rather, it’s a way of looking at the nervous system, one that can inform and deepen any clinical approach. I think of it as a kind of moment-to-moment awareness of the ongoing biological reactions of self and others that deeply influence the quality of the therapist–client relationship—and ultimately, a client’s fundamental sense of safety in the world. It’s an element of mindfulness; ideally, it’s a tool for healing.

Deb Dana, LCSW, is a clinician, coordinator of the Traumatic Stress Research Consortium in the Kinsey Institute, and developer of the Rhythm of Regulation training series. She’s the coeditor, with Stephen Porges, of Clinical Applications of the Polyvagal Theory, and author of The Polyvagal Theory in Therapy. She’s currently writing Polyvagal Exercises for Therapists and Clients: Shaping Your System Toward Safety and Connection.

This blog is excerpted from "The Touch Taboo," by Deb Dana. The full version is available in the March/April 2019 issue, The Missing Piece: Embracing a More Embodied Psychotherapy.

I didn't get a response to my comment of Feb. 7, but I found a nice article that recognizes the confusion and provides an integrated and expanded model. https://relationalimplicit.com/polyvagal/

Thanks Deb for this precis of the theory. I've already heard you say more about it at https://youtu.be/zWXjcM18mCQ and elsewhere. To make this easier for clients, I find it helpful to integrate the "four F's" with the polyvagal terminology. You've already said that Fight or Flight is a sympathetic system response. Freeze seems to be dorsal activation, and aFFiliate is ventral activation. I think some of my confusion has come when trying to integrate the ladder metaphor of your Hierarchy of Response, with the "Window of Arousal" notion that has been promoted by Daniel Siegal, Pat Ogden, Bessel Van der Kolk, etc. Between these two models, the order or layout of the states is different in a way that may not merely be an accident of metaphor. Namely, the state of social engagement is in the middle of the range in the window, but it is at the top of the ladder. The order of the ladder would make sense in that it apparently matches the order of the evolution of these three systems. Furthermore, did I also hear somewhere that the transition from dorsal to ventral must pass through a phase of sympathetic activation? Whereas with the window model, I understand we want the hyperaroused to calm down, and the hypoaroused to liven up, but only enough. It is a Goldilocks situation, to become "not to hot, not too cold, just right". It is not implied that one has to pass through the sympathetic activation to get from hypoaroused to socially engaged. I'm curious whether these two models are indeed at odds, or whether they are compatible?

Mark Davis (below) asks for any evidence of the Polyvagal Theory. Yes. there is: the presence of the polyvagal nervous system. Probably more will be learned about it as time goes on (although doesn't Porges' work date back 25 years or more?). And I'm sure you will find many survivors who are aware their thinking brain may be thinking one thing and their body is in total conflict with it. And keep in mind science has often lost credibility with laypeople who observe things directly--such as the social-emotional capacities of mammals-- while for decades science had resolutely denied it. P.S. My parents were scientists at a time when science was overspecializing and ignoring data from adjacent fields. I refused to become a scientist for that very reason. See Gregory Bateson's definition in his Intro to Steps to an Ecology of Mind --that science has two beginnings...

Dear Ms. Dana, How does this theory address ( or not address) the lack of body-awareness that often goes with 'being on the spectrum?" (i.e. on the high-functioning autism spectrum). Thanks, Elizabeth Emmert, LPCC-S Mt. Vernon Psychological Services Mt. Vernon, OH 43050

Hi You do know that it’s just an unsupported theory? The unique bits of Polyvagal theory have no empirical basis. It’s just speculation from Porges. We refuse to allow Polyvagal Theory to be taught on our courses. There’s a Swiss researcher who’s been asking on Researchgate for anyone to provide ANY evidence for Polyvagal Theory. I think 5,000 have read his critical article and no-one has provided any experimental research to back up this theory. Perhaps look into this more? Mark Davis The UK College of Hypnosis and Hypnotherapy

I would like to connect with Deb Dana for this interesting concept and once I get it fully after speaking with or meeting her, then maybe I would like to take help for some traumatic challenges I am going through. Thank you Kind Regards Vikas