The Myths About Male Sexuality

Esther Perel on Challenging the Definitional Void of Manhood 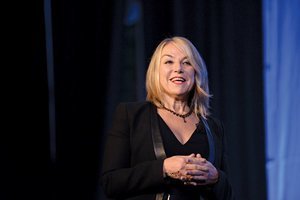 Editor's Note: The following piece is adapted from Esther Perel's 2018 Networker Symposium keynote, "Our Myths About Sexuality." To read more from the Symposium, check out the May/June 2018 issue.

The #MeToo movement is about more than harassment. It’s about challenging the vestiges of the old structures of power, because patriarchy doesn’t just hurt women, it hurts men as well. Terry Real says, “Under patriarchy, we can either be powerful or connected but not both.” My work is about helping men and integrating those two dimensions.

Women have had about 50 years in this country to rethink their place in the world, to organize, to expand the definitions of female identity. Men haven’t had that opportunity yet. But, to me, it’s always been clear that the lives of women will not change until the men come along and get to do their own thinking and have their own reckoning, until they get to challenge the definitional void of manhood, and until we stop not touching our three-year-old boys because we don’t want them to be “sissies.” Even before our sons can walk, parents overestimate their physical prowess—how well they crawl—because we’re already imposing on them performance-based masculinity, built on autonomy, silence, strength, fearlessness, and competition. This is toxic masculinity: the norm itself.

So we have to continue to invest in helping women find their voice and find their power. And at the same time, we have to help men be able to safely open their hearts and show their vulnerability. Emotions are human, and we need to free them from the gender-specific reductionism of labeling tenderness and softness as feminine and power and robustness as masculine.

In my work I’ve focused extensively on gender and sexuality. I’ve tried to debunk age-old myths and narrow definitions. At this moment, our main attention is being placed on the aggressive, sadistic, and predatory nature of masculinity, specifically male sexuality, and the “powerful men who harass.” But powerful men don’t harass; powerful men seduce. It’s insecure men who harass, who feel the need to use their social power to extract sex.

But this insecurity is old news. We know that on dating websites, a man needs to earn $40,000 more per year to look as attractive as a man who is one inch taller than him. This skewed sense of masculinity is societal. Men internalize it, boys internalize it, and the people who raise them internalize it.

Next myth: male sexuality is predatory. The New York Times printed a whole article about how it’s predatory by nature. I wanted to say that is so not the case. What I see in my clients, in my audiences, everywhere I go, is that it’s not the predatory nature of male sexuality that occupies men: it’s the fear of being predatory.

Last male-sexuality myth: all he wants is sex. No, that’s not the case. But if tenderness, softness, surrender, closeness, touch, affection—if all those things aren’t part of a man’s identity, then sex becomes the only keyhole through which he can experience any of them. What comes across as his singular determination for sex is often hiding his true needs: sex is the only socially acceptable way to experience those feelings. If we want this to shift, we need to create a culture where men can express their needs in more than just the masculine code of sex.

As therapists, we have a unique role at this moment to help everyone navigate the challenges of modern relationship. Our relationships are undergoing massive changes, and we can help people engage in courageous conversations and speak the unspoken. For many of us therapists, this may be the first time we ourselves are having these conversations. But one thing doesn’t change and makes our work forever meaningful: the quality of our relationships is what determines the quality of our lives.

This blog is excerpted from "Our Myths About Sexuality," by Esther Perel. The full version is available in the May/June 2018 issue, Men and #MeToo: What Are They Thinking?

Most little boys did not bond with there mom ! I experienced being afraid of my mom at a early age ! And at 61 I just don’t feel attracted to women it’s really not that important to fall in love : at 12 years old I seen my mom go head first through a windshield of car !both parents were drunk dad tried to kill me and my mom ! I seen my moms blood spattered on the windshield her head busted a hole in glass of windshield I was 13 years old 1971 November 6 ! Coming home from a wedding! On a cold winter snowy night.3 weeks before thanksgiving! 6 weeks before Christmas it was a perfect Christmas on that night snow was so perfect beautiful! The metal hitting at impact mom crying and begging dad to let the kids out of car ! I seen my own mother lifeless body laying on the hood of car and she said Jerry help me ! 48 years later I understand domestic violence abuse neglect and recovery from trauma at 12 years old it effected my development! Even growing up I didn’t want to be around girls! Sorry about long text! Thank god im in trauma recovery! I lost my identity at 6 years old ! So much trauma fighting getting beat , my face is scared ! At 8 years old I was hunted in the woods it was hidden seek ! Would have to hid from the hunter chasing me ! If he could Not find me I lived ! I grew up afraid of everything and everybody ! There a lot more of domestic violence!I can’t tell you but ! At 10 years old I started drinking and cutting my face with razor blades! Teen age years I would take pills and try overdose! I always lived ! Most of my life I’ve bin in recovery! I never wanted to come home to parents house! So I ran away and just disappears bin sober 35 plus years and no drugs! I don’t even worry about a girl friend! I’ look like scar face ! People have asked if I was dressed up for hollow ween! Women don’t find me to be a attractive! I had a lot of recovery.and done work shop mending the soul! I understand why I became the problematic child growing up ! Domestic violence and child abuse ! Really effects a the child development! Then adulthood he plays catch up with his or her life! I can’t hide from my story it’s shows on my face! Some people can hide there stories and hide there personality until they date ! We all have a hidden personality behind who we really we’re supposed to be ! Yes mens sexuality is scared if your mother hated her own flesh and blood! I was the first male child born in my family! And I wasn’t supposed to live ! I was the child Called the bastard child! The stuff I seen felt and experienced ! I lived in a war of death! Will I make it to adulthood hood or will I be killed by my own family! So I ran away from home! My mother is in a nursing home dieing ! She had a rough life! People Don’t understand Domestic violence or child abuse! Or verbal abuse physical abuse emotional abuse! And torture burn hands ! The things I seen as a kid we’re not supposed to happen! I lost my whole life to the worsted torture a kid will experience in a life time ! I hope one day ! I will fall in love! And she will fit in my story !and I will fit and understand her story! The whole world lives in a fairytale! Everyone pretend to be normal until you see there’s true colors! Everyone is looking for mr write! And when theY find him they pick out all the bad things! But never see the greatness of what a real persons true self is !

A well written and well researched piece with great nuance. I would gently challenge the idea that men are not aggressive. Part of most men’s challenge is to balance the paradox of living with the aggressive nature of testosterone, which I feel safe in describing as an aggressive hormone flowing through our veins, with our inherant sensitivity - no easy task.