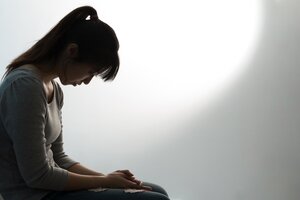 The first time I encountered a client who engaged in self-injury was on a Friday at 4:30 p.m. with five minutes left in the session. Thirty-two-year-old Robin had been in treatment with me for six months. She was a survivor of sexual abuse, with a history of substance abuse and eating disorders. Her father had been alcoholic and violent, her mother was devoutly religious but deeply depressed, and her younger sister was the scapegoat. Robin took on the role of caretaker of the family.

By 14, Robin binged and purged, got high on drugs and alcohol, and was sexually promiscuous. In her mid-twenties, she began having flashbacks of sexual abuse by her father. She saw three therapists in four years, finding it "nearly impossible to trust anyone." With the help of a 12-step program, she was recovering from her substance-abuse problem. Now, still living with her mother, she was in psychotherapy with me to address the "demons and secrets inside."

For the past month, Robin had been working with me to resolve overwhelming flashbacks related to her sexual trauma. That Friday, as we were wrapping up the session, she began to roll up her sleeve and said with a heavy sigh, "Uh, I guess I should show you this." "This" was a two-inch cut she had made on her forearm with the jagged lid of a pineapple can. It was my first encounter with cutting.

My heart was pounding as I struggled to keep a professional facade and figure out how best to respond. Sensing my distress, Robin quickly lowered her sleeve and tried to reassure me that "it was no big deal" and "nothing to worry about." I kept her in my office for two hours, attempting to assess if she was suicidal and needed hospitalization. She talked about her injury with eerie detachment, reiterating that she didn't want to kill herself. She had cut herself--just as she had done many times before--simply to feel better. "You cut yourself to feel better?" I wondered to myself. "How could it possibly feel good to slice into your arm?"

However unfamiliar this symptom was to me, I concluded that deliberate, repetitive self-injury could only be seen as pathological. I had to help her immediately stop this behavior. So I carefully explained why cutting was a bad idea and how it would only create more problems for her. I insisted that she agree to not hurt her body in any way during the upcoming week. Finally, she acquiesced. I exhaled with relief. I felt calmer and more in control.

Within the first five minutes of our session a week later, she rolled up her sleeve and told me, "I felt really mad after I left here last week. I knew you didn't understand, but I was also scared that you couldn't help me or that you'd be mad at me if I didn't stop. I didn't feel better until after I made these new marks." Then with a bittersweet but triumphant grin, she announced, "So much for the contract, huh?" I had lost round one.

For the next several weeks, I felt compelled to keep pushing a standard safety contract. Her cutting increased. "I feel good when I do it," she would say, "especially since I'm not getting high anymore." Even when she could temporarily stop cutting, she reverted to bingeing and purging or having unsafe sexual encounters.

My refusal to accept Robin's self-cutting as anything but dysfunctional kept me from hearing what she was trying to tell me. Worse, it was actually causing more destructive behavior.

"This helps me," she was saying. "You can't just expect me to stop." I realized that unless I rethought my clinical assumptions, therapy with Robin wasn't going anywhere.

I changed my strategy. I began with the premise that Robin , not I, was the expert in self-harm. Over the next six months, I let her teach me about the behavior, and the thoughts and feelings that accompanied it. I was particularly interested in the experiences that preceded the "need" to self-injure.

In one memorable session, Robin described an incident that put her behavior into context.

She was in a crowded checkout line at the supermarket, when the cart behind her accidentally bumped into her. She immediately felt enraged and anxious. She remembered thinking, "Why is everyone out to hurt me? Why can't I just be left alone?" Her anger and sense of powerlessness grew. By the time she got home, she felt "out of it and numb." In desperation, she cut into her left arm. Immediately, she began to feel better.

When Robin and I processed this experience, we saw how benign interactions and life events often triggered strong emotions and distorted thoughts. Her inability to manage these created overwhelming anxiety. She would then dissociate to numb her discomfort. In that "zoned out" state, she didn't feel pain and was able to cut herself. Injuring the body released endorphins, the body's natural opiates, and as a result, her despair and anxiety dramatically decreased. For her, as for many others who self-harm, the initial response to self-harm injury was a kind of pleasure: "I hurt myself and then I feel better."

I learned to respect the fact that cutting felt like an effective coping strategy for Robin. In the long term, it created more problems--embarrassment; a loss of control; disempowerment; feelings of inadequacy and failure; and physical injury. These negative effects added to her vulnerability. Nevertheless, she genuinely believed that cutting was the only effective way to cope. Asking her to give it up was like asking her to turn over the tiny life jacket she clung to when adrift in the ocean.

I gave up the power struggle with Robin. I told her she wouldn't stop hurting herself until she was ready to do so. My job was not to browbeat her into change, but to introduce her to healthier behaviors to engage in before she hurt herself--that would bring her the relief that cutting gave her. I introduced her to a behavioral contract that I have since come to call C.A.R.E.S.S.: Communicate Alternatively, Release Endorphins, Self-Soothe.

Communicate Alternatively: Self-harm is a form of communication. The overwhelming pain becomes visible and tangible through the wound. The injury validates and legitimizes the internal pain so that others can bear witness. Self-harm is way traumatized clients can tell their abuse stories without words and without disobeying a perpetrator's injunction against "telling." So I encouraged Robin to draw, make a collage, or write about her thoughts and feelings before she hurt herself. I suggested she draw the body part she wanted to cut and the actual injuries she would inflict, or create a collage of words and images to articulate her feelings and thoughts. Over the next few months, she learned to use journaling, poetry, and letter writing as alternative forms of expression.

Release Endorphins: Robin needed new ways to experience the euphoric rush that her self-cutting triggered. Endorphins are released not only by intense pain, but also by laughter, affection, and vigorous physical activity. So I encouraged her to listen to a funny CD or movie; to hug a pillow, stuffed animal, or pet; and to do 10 to 15 minutes of physical activity before she acted on the impulse to self-harm.

Self-Soothe: Robin's only strategy for managing her emotions was self-injury. So we identified new ways she could comfort herself, such as taking warm baths or showers; wrapping herself in a quilt and rocking; listening to comforting music; reading positive affirmations; lighting scented candles and meditating; engaging in positive self-talk; and calling a friend or hotline.

I told Robin to do each of the three components of C.A.R.E.S.S. for 10 to 15 minutes as soon as she felt the impulse to hurt herself. That meant that she'd practice 30 to 45 minutes of beneficial, healthy, productive behaviors to accomplish exactly what the cutting had previously achieved. Robin slowly began to try these new behaviors, and felt less need to follow through with her destructive impulses. When she did, her injuries were more superficial. The C.A.R.E.S.S. contract taught Robin a way to retain a sense of power and control by expanding her range of positive coping strategies.

I've used this intervention with many self-injuring clients since my work with Robin. Of course, not all of them comply with the C.A.R.E.S.S. contract. I've discovered the importance of moving in baby steps: verbally rewarding and supporting the client who even thinks about using the contract, or does even some part of it before engaging in self-harm.

When clients roll up their sleeves or pant legs, open their hands, or push their hair from their necks to show me their injuries, I consider it a testament to our therapeutic relationship and their trust in me. Their injuries are poignant information about their pain. While offering them other approaches and expressing my belief that they can embrace healthier behaviors, I respect where they are and exercise the clinical virtues of patience, persistence, and compassion.

It took several more years for Robin to give up her self-injury altogether. The work unfolded on her terms and in her time frame, regularly punctuated by setbacks and cutting episodes. The move toward eliminating the behavior was completely up to her. In the process, her drawings, collages, and journal entries helped connect her destructive behaviors to her childhood abuse. Robin came to understand that being bumped by a supermarket cart from behind connected to being sodomized as a child. Cutting her left forearm was a nonverbal way to indicate where her father had "grabbed her when he took her upstairs to molest her." She realized that her mother's religious dogma played a role in her self-harm. "She would read me Bible passages that said to 'cut off the offending hand' when you sinned. Since my hand participated in sexual acts, it made sense to try to get rid of it."

By her fourth year of treatment, Robin began to feel confident and strong. She chose to confront her mother about her childhood abuse and sexual trauma. When her mother discounted her pain and likened the sexual abuse to sinning, she had the courage to move out of the house.

With her newfound freedom, she pursued a college degree. Her new dream included a master's degree in special education. Although she continued to struggle with her weight, she no longer binged and purged.

Several years after Robin terminated with me, she called to schedule an appointment.

Looking calm and self-assured, she told me about her successes. She was working on her degree in special education, had supportive, healthy friends, and was celebrating almost seven years of sobriety. And then, with five minutes left in the session, she leaned forward and said, "I guess I should show you this." For a split second, my heart fell. With a triumphant grin, she held out her hand and revealed a beautiful engagement ring. "I know what you were thinking," she said with a laugh. "But you helped me figure out that I don't ever need to go there again."

This blog is excerpted from "Treating the Self-Harming Client," by Lisa Ferentz. The full version is available in the September/October 2002 issue, Brain Therapy: The Neuroscience Discoveries That Can Change Your Practice.