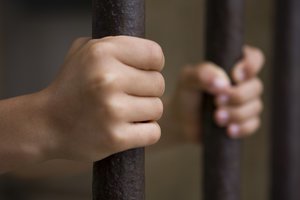 They're the faces of children: The 17-year-old sniper with the delicate features and sad, boyish look who took part in a deadly shooting spree that terrorized the nation's capital. The chubby-faced 14-year-old with tears streaming down his cheeks after he was sentenced to life in prison for stomping to death a 6-year-old girl when he was only 12.

As their crimes and their youth shocked the country, the cases of Lee Malvo and Lionel Tate also renewed a debate that for many years has been largely one-sided: how to understand and address the crimes of children. For the past 20 years, the American criminal justice system has dealt with juvenile offenders in a way it never did before: by treating them like adults who are responsible for their actions and must be isolated and punished for their crimes.

The result of that policy, says a growing chorus of psychologists, lawyers, and researchers, is record numbers of young people who are sentenced to juvenile detention facilities that have become warehouses for mentally disturbed youth. "Put bluntly, the juvenile-justice system has become the dumping ground for poor, minority youth with mental disorders and learning disabilities," said Laurence Steinberg, a juvenile-justice researcher and professor of psychology at Temple University, in a recent lecture.

The punitive trend began in the 1980s, in response to a sharp rise in the number of murders committed by juveniles, sensational TV coverage, and inflammatory pronouncements by conservative sociologists about a new breed of "radically impulsive, brutally remorseless . . . superpredators." Tough-on-crime legislators responded by getting especially tough on teenagers. "Adult time for adult crimes" became their mantra.

"Everybody was going crazy," says Thomas Grisso, a professor of psychiatry at the University of Massachusetts Medical School. "Virtually every state changed its [juvenile] laws and made them tougher and more punitive."

Florida, where Lionel Tate received a life sentence in 2001, was particularly zealous; by 1995, prosecutors there were sending 7,000 children a year into criminal court to be tried as adults. In 2000, the St. Petersburg Times reported, children as young as 6 and 7 years old were being held overnight in detention centers for such offenses as scratching a teacher's aide or kicking a police officer.

Then, in the mid-1990s, the juvenile crime rate, like the crime rate among adults, began a steady decline, and by 2000, the arrest rate for violent offenses was back to the levels of the early '80s. The percentage of violent crimes that victims attributed to kids under 18 dropped from 40 percent in 1993 to 24 percent in 2002. Yet in 2000, the juvenile court caseload nationally was 50 percent greater than it was in 1980. "More and more juveniles are being referred to court today for less and less serious crimes," says Steinberg. And many of these kids are mentally or emotionally disturbed.

The large number of mentally disturbed children in custody "is one of our society's dirty little secrets," says Steinberg, who pegs the rate of mental disorders among incarcerated teenagers at roughly three times that of kids in the community. Yet few mental health services are available to disturbed children behind bars. "Some juvenile facilities are better than others," says Grisso. "But on average, they aren't given the resources to provide anything near what's needed."

If the legal system often fails to evaluate children's competency to stand trial, it also pays little attention to developmental differences between children. Psychologists may distinguish between early and late adolescence, but in the black-and-white world of the justice system, Steinberg points out, "you're either an immature child or a fully responsible adult. There's no middle ground."

This makes it difficult for the justice system to fashion remedies that fit both the crime and the criminal. Steinberg argues that because of their immaturity, juvenile offenders shouldn't be held as culpable as adults. After all, he says, they're more impulsive, less able to think through the consequences of their actions, more susceptible to coercion, and more likely to take risks. One reason may be neurological: key parts of the brain involved in planning, impulse control, and learning from mistakes are still developing during the teen years and don't fully mature until young adulthood. "I don't say that developmental immaturity should excuse adolescents from criminal responsibility," Steinberg argues, but "it may be a mitigating condition."

The fact that some adolescents are less mature or more impulsive explains little to Stanton Samenow, a well-known behavioral psychologist and expert witness for the prosecution in the Malvo case. Samenow dismisses the notion that adolescents are less culpable than adults, just as he rejected the claims made by Malvo's attorneys and psychologists that Malvo was brainwashed by his father-figure companion, John Muhammad. "[Malvo] was sane, he was rational, he knew what he was doing, and he certainly knew right from wrong," Samenow says.

Samenow is also a staunch critic of environmental explanations for criminal behavior. "This idea that if you were abused you're destined to become an abuser isn't true at all," he says. A history of being abused can create problems, "but I don't think it puts people at risk to be abusers. The parental-blame thing has gone way too far."

Samenow, who spent years working with mentally disturbed criminals at Saint Elizabeth's psychiatric hospital in Washington, D.C., is uninterested in the background of offenders—but doesn't give up on them either. He believes a small number of offenders can be helped to change when they're feeling vulnerable—after they've been sentenced to prison, for instance—and can be made to look honestly at their own lives. The goal then, Samenow says, is to use a cognitive-behavioral approach to get a criminal to recognize the destructive thinking patterns that have gotten him into so much trouble. "It's a process of talking to a person about who he is and how he thinks, getting him to see that certain thinking patterns have resulted in him injuring others, and that more of the same will only lead to more in and out of institutions."

Scott Henggeler, director of the Family Services Research Center at the Medical University of South Carolina and the principal developer of Multisystemic Therapy (MST), believes a more comprehensive approach is necessary. He thinks the optimal setting to work with young offenders is in the community—in their own home, and with their own family. For him, the background and current context of a young person's life is not only interesting, it's where the action is. "You don't sit in the clinic waiting for the clients to come in," Henggeler says. By going to the child's home, an MST therapist can get a handle on the family's problems and strengths and provide the most appropriate services.

Henggeler argues that working with a teenager in his own family, in the very neighborhood where he gets into trouble and where his troublemaking peers hang out, makes far more sense than working with kids in a remote and artificial juvenile prison or residential treatment facility.

Outcome studies have found that kids who complete MST programs go on to commit fewer crimes than kids in control groups who went to correctional facilities. "While kids were locked up, they weren't committing crimes, so, in theory, the community was better protected," Henggeler notes. "But when they came back, they quickly committed much higher rates of crime."

To Henggeler, the calculus is simple. Restrictive programs like incarceration and boot camps "increase rates of criminal activity and do so at a very high cost," he says. How high? A year in juvenile lock-up in New York costs about $50,000; a year of MST services about $7,000.

On one point Henggeler and Samenow agree. With few exceptions, young offenders who are locked up will return to the community. Says Samenow: "The public basically says 'out of sight, out of mind.' The problem is that after they come out of these facilities [most] are unchanged. It's shortsighted to say 'Lock them up and throw away the key.'"

This blog is excerpted from "Adult Time for Adult Crime," by Rob Waters. The full version is available in the March/April 2004 issue, The Secret Lives of Clients: The Inside Story of What Really Happens in Therapy.

Juveniles should not be tried as adults. The facilities are full of kids with mental health issue that would be better served in the community instead of locked up. Bobby Hughes Dalton Ga

Check out THE ANATOMY OF VIOLENCE (A. Raine) about the differences in the brains of violent offenders.