Learning the Art of Being 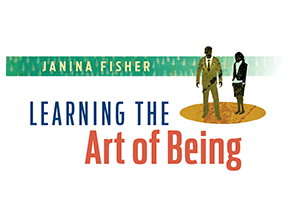 Learning the Art of Being


Early in my career, I received a phone call. It was January 1991. I was in my office in New Hampshire with a client, and I could see that by the end of the day, there’d be a foot of snow on the roads. Suddenly, in the middle of a session, my receptionist came in and said, “You have an emergency call.” So I excused myself and picked up the phone next to me.

My sons’ school principal was on the other line. He told me they’d just been expelled for selling drugs, and to pick them up immediately. They were 15 and 16 at the time.

There I was. I had a client sitting in front of me who’d just finished telling me that his wife was pregnant, that he was afraid of becoming a parent and worried he’d fail as a father. And right in front of him, I was experiencing my own failure as a parent.

“I hope everything’s okay,” my client said after I told the principal I’d arrange for them to be picked up and hung up the phone. I paused, and, as many therapists do, I made a split-second decision. I’d show him that when tough parent moments happen, you can rise to the occasion.

“You’re going to make a very good parent,” I told him. “It’s not going to be easy. Let me tell what just happened to me.” Sharing this personally devastating event with him in the moment was a risk, but he felt very supported hearing about it. “Wow, so even you, who I think must be a wonderful parent, even you have problems!” he said.

Sometimes your clients take care of you even though they don’t know it, by forcing you to be centered, reflective, and intentional. Ironically, it was the imperative to be fully present for my clients that helped me take better care of myself that day. When we’re our best selves as therapists, it can carry over to our personal lives.

I had the boys’ grandparents pick them up, and I saw clients for the rest of the day while the snow came down. I had a 60-mile drive home, and in the middle of a blizzard, I wouldn’t arrive until late that night, so I wouldn’t be facing the boys until the next morning. It gave me the chance to think hard about how to respond. My tendency would’ve been to say, “What the hell’s going on? This is unacceptable!” But by the day’s end, I felt ready to approach my children the way I’d approach my clients—patiently, rather than anxiously or angrily.

Over the next six months, my sons went to rehab. But when they came out, problems continued. The older one relapsed and went off to follow the Grateful Dead and sell drugs for a living. So, while working as a therapist, I was also staying up at night wondering where he was. Occasionally, I’d get a phone call from him saying some version of “Mom, we got picked up by the police. They stopped us and they found pot in the van, and we’re sitting in jail.” I had to learn to say, “I’m very sorry, honey. I’m sure you guys will figure out a way around this.”

So many parents of teenagers struggle with the fact that their kids are out of their control and taking chances with their well-being. You spend a lot of time saying, “No, you’re grounded. No, that’s not going to happen,” hoping that they’ll grow up to be intact, responsible citizens.

I was growing muscles I’d never had as a parent or as a therapist. Muscles that said, I’m not responsible for fixing everybody. In the drug rehab world, parents are strongly encouraged not to be rescuers, because that only enables the person’s drug problem. I learned to manage my fear for my son and the loss of control over my world by trusting that human beings are designed for survival, not destruction. I had to believe that their innate instinct to learn and grow and land on their feet would see them through. Some days, it was hard to believe, but that practice would enrich my work as a therapist, giving me faith that my clients could also survive their darkest nights—and that I could, too.

Meanwhile, work was a centering, calming influence. In therapy, we have to be present, compassionate, and curious, rather than panicking, self-judging, or judging of others. I was saved by my work. It taught me a particular kind of self-care. As a member of Nar-Anon, the family program connected to Narcotics Anonymous, I found that 12-step work was immensely calming. I still use two of the mantras from Nar-Anon today.

The first one is Your role as helper is to be things, not to do things. When I remind myself of that, it stops me from taking on my clients’ burdens. I don’t have to take on responsibility for their suicidality, for their anger at me, for their anger at everybody else, for their failed marriage, or for their depression and lack of sleep. I just have to be. They need me to be. I don’t need to do anything.

The second mantra is Other people’s actions and reactions say more about them than they say about you. As parents and as therapists, we often worry that there’s something we’re not doing, or there’s something we did that we shouldn’t have done. It’s easy to carry self-doubt. The reminder that how our clients and children react to us says more about them than us helps us be more attuned and hear them differently. When we feel less self-doubt and less defensive, the relationship prospers. I came to realize that it was good for my children when I stopped blaming myself, and them. It’s good for my clients when I do this with them, too.

To make these new perspectives stick, I realized I needed to develop my own inner state of calm, as difficult as that sometimes was. I learned that we don’t have to suffer because of the suffering of others. Sometimes it’s hard not to, but it doesn’t help when we double the suffering. I’ve carried that with me ever since—the ability to sit with emotional pain but not carry it.

It took me a while to learn the practice of letting go. There’s a concept in meditation that if we don’t stop and rest in the present moment, the nature of the mind is to jump to the next thing and the next thing. With my oldest son, I’d get stuck worrying about where he was. Did he get out of jail? What state is he in? How is he living? Is he eating? Once I learned to let go, I found that I could apply that practice to my clients: I could let go of feeling responsible for them so I didn’t interfere with their developing responsibility for themselves.

For therapists, just being in the present moment is a tremendous act of self-care. Self-care isn’t just about eating healthy, or going to the gym, or taking a walk: it includes how we’re living moment-to-moment in our relationships with our clients. If I’m drowning in my client’s suicidality or horrific story of abuse, it’s not going to help just to take a bubble bath.

My older son, about eight months after he went off to follow the Grateful Dead, contracted hepatitis eating bad food while homeless on the streets of San Francisco. He called me up and said, “Mom, I have hepatitis, and I can’t even smoke dope because it makes me feel sicker.”

It was the best phone call I’d ever received. I said, “Oh, what a shame, sweetheart!” And his illness brought him home. Today, he’s a psychologist. He specializes in trauma. We share an office. He’s married and about to have a baby. He’s become a wonderful person, and he used his experience to become a much better therapist than he’d ever have been without it.

As for me, it was extraordinary to discover that if I did nothing but keep myself centered and present, the world turned. It made me realize that we have so much less control than we believe, but it’s also given me faith in the human capacity to land on our feet. I’ve carried that philosophy over to my clients, believing that eventually they’ll land on their feet—that I don’t have to pull them to their feet.

It isn’t easy to learn self-care. Sometimes, you need to go through a fiery furnace to arrive at a place of centeredness. I managed to take the heat and come out on the other side. It’s made me a better therapist and a happier, healthier human being.

Janina Fisher, PhD, is an instructor at the Trauma Center in Boston, a senior faculty member of the Sensorimotor Psychotherapy Institute, and a former instructor at Harvard Medical School.


Previous: Vulnerable Together
Next: Talking About the Nightmare
Read 6936 times