When Your Client Dissociates

Handling the Emergency and Navigating the Road Back 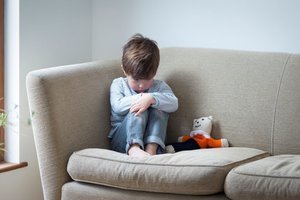 She wasn’t responsive to my voice or my soft touch. Her face was pale, her body was limp, her breathing was rhythmic and shallow. Should I call the medics, I wondered, or have her mother carry her out of my office? Luckily, she was my last client for the day, so I had time to figure out what to do with this unresponsive teen. I was seeing dissociation in its extreme form: the body shutting down in a “freeze” position, the way some wild prey respond when threatened by a predator. But what in our session had 17-year-old Trina perceived as “predatory”?

Though there had been a casual conversation about college plans and a boyfriend, there had been no talk of her early sexual abuse memories with a grandfather with whom she no longer had contact. After three years of treating her for dissociative behaviors, including sudden regressions, amnesia, and dazed states, I thought we’d moved beyond such an extreme response to stress on her part.

Trina was demonstrating a “dissociative shutdown,” a symptom often found in children faced with a repeated, frightening event, such as being raped by a caregiver, for which there’s no escape. Over time, this response may generalize to associated thoughts or emotions that can trigger the reaction. Although the child’s body may be immobilized, her mind remains active and can invent solutions, often retreating into an imaginary world, where bad things aren’t happening. With time and practice, the mere thought of needing to escape a situation may trigger a self-induced hypnotic retreat, along with a primitive freeze response.

Working with dissociative children and teens can be unnerving for therapists, particularly in view of such extreme symptoms. A basic theoretical understanding of dissociation can demystify even this kind of sudden in-session event. But as important as it is to have a theoretical understanding of what’s happening, a clinician needs a pragmatic, strength-based, problem-solving focus to feel prepared to treat such entrenched dissociative reactions in children and teens.

Most children experiencing dissociation don’t have as little control as Trina did at this juncture. Usually, signs of dissociation can be as subtle as unexpected lapses in attention, momentary avoidance of eye contact with no memory, staring into space for several moments while appearing to be in a daze, or repeated episodes of short-lived spells of apparent fainting. As they move along an intensity spectrum, some young clients may have alterations in identity, with sudden regressions or rage-filled episodes, and little awareness of their behavior.

The reversal of dissociative states requires a therapeutic relationship in which the child can feel safe and clearly distinguish between the present environment and the traumatic past, while developing the deep, embodied conviction that the future doesn’t have to mirror what he or she has already been through. From years of experience working with children like Trina, I knew that my job was to help her discover alternatives to her avoidance response, understand and learn to tolerate its triggers, and find ways to override the automatic physiological escape tendency over time.

When I asked Trina’s mother to come into my office, she first gently shook her daughter, saying “Trina, session is over” in a singsongy, motherly tone. No response. In a quiet, hypnotic tone, I suggested to Trina that she’d find herself growing more and more awake, ready to face hard roadblocks in her life. No response. Then Trina’s mother and I decided to call 911. Her mother, apparently accustomed to this strange behavior, was surprisingly calm. When the medics took Trina to an emergency room, I expected that she’d wake up as they transferred her to the stretcher and then the ambulance, but she didn’t.

Two hours later, my cell phone rang. It was Trina. “Dr. Soybean (her playful name for me),” she implored, “Please tell the hospital doctor that I don’t need psychiatric admission, and that I’m not crazy!” As relieved as I was to learn that she’d awakened from her dissociative slumber, I saw a great opportunity to move her forward therapeutically. Whenever my child clients ask me for something, I find a way to ask them to do something in return that will be a therapeutic advance for them. So I asked Trina to come to my office first thing in the morning, and explained that if she could successfully describe what happened right before her dissociative shutdown, she could avoid the hospitalization. If, however, she was unable to uncover the feelings that led to this self-defensive reaction, it would make sense for her to go the hospital after the session. Trina agreed to this.

The next session centered on the kind of “fishing expedition” often required with dissociative patients. Blocked from the feelings that usually help people string together a coherent narrative explaining their experiences, dissociative clients’ responses often appear as mysterious to them as they do to others. Trina remembered that we’d talked about her high-school science project, her ambition to be a biochemist, and a boyfriend she was outgrowing. I suggested that something else in our conversation had awakened her old feelings of being helpless, frozen, and unable to move forward. She acknowledged that was true, but remained mystified about what had triggered the old sense of being trapped.

I asked her to focus on that feeling of being trapped and as Trina got in touch with it, she became agitated and nearly mute. As she struggled, I modeled slow, rhythmic breathing and softly said, “Breathe with me. We’ll get through this together.” She took my cue and followed my slow breathing. “Where are you feeling this in your body I asked?”

I used a familiar image to help her counter the sense of constriction in her chest. “Let’s imagine together that you’re out in the woods near your house and breathing the fresh fall air,” I said. We stayed with this image for about five minutes, and then I redirected her.

“Whatever’s happened, we can work together so you can handle it. We can find a solution, no matter how scary the trap feels.” I’ve learned that blocked memory usually returns when the therapist provides safety and confident reassurance that the information is tolerable, so I asked, “If you had to guess who it was about, would you guess your mother, your boyfriend, or your father?” Sometimes “guesses” allow the unconscious mind to express itself.

Trina’s parents were divorced, with joint custody. With a shaking voice, she told me that her father had threatened to withdraw college funding if she didn’t agree to overnight visits at his house, where her early abuse had occurred. She’d visited him willingly over the years when he put no real pressure on her, but the controlling nature of his new demand aroused the hopeless feeling she’d experienced when her grandfather’s abuse had seemed so inescapable.

Now that Trina had explained her dilemma, we began to brainstorm practical solutions, discussing ways she could stand up to her father. Ultimately, she decided she’d like me to serve as an intermediary to help him understand why presenting his demand in this authoritarian way triggered her old symptoms. In a subsequent session, I told him how she experienced his attempt to influence her through his control of her college money. He insisted he hadn’t really intended to withhold the funds, he was only emphasizing to her that he “could.” In a subsequent family session, with my prompting and direction, he promised her he’d pay for college, and that he’d never use this threat again. For her part, Trina promised him she’d visit him as her schedule allowed. She never experienced that degree of dissociative shutdown again.

Over time, Trina learned to believe that the brighter future she dared imagine for herself was possible. Her treatment revolved around learning to combat her automatic tendency to dissociative avoidance and repeated recommitment to her belief in a positive future, whatever challenges she faced in her life. Through her college and postgraduate education, she succeeded, using her skills in affect tolerance, identifying emotional triggers, and self-awareness to navigate dismissive teachers, rude boyfriends, and even the tragic death of a close friend. She stayed in my practice for six years, maturing from a frightened, avoidant girl who had trouble attending school to an aware, insightful survivor.

Today, Trina is an accomplished medical professional, married, with a young child of her own. When asked about her recollections of her early treatment, she says, “Yes, I was a weird kid, but you knew what to do about it.” She quickly changes the subject, but proudly shows me pictures of her new son, who she assures me is developing beautifully, “without dissociation or other wacky stuff.”

This blog is excerpted from "Treating the Dissociative Child" by Joyanna Silberg. The full version is available in the January/February 2013 issue, Treating the Anxious Client: New Directions for Psychotherapy's Most Common Problem.

This was an excellent article -well written, full of practical tips and personal experience. I really enjoyed learning about dissociation as this therapist experienced it with her clients. It left me feeling hopeful that despite severe trauma, clients willing to put the work in (and in the right therapeutic relationship) can find a way to live a fulfilling life.

As a therapist in private practice, in the late 80s. I had an adult client who would dissociate like the teen in the article. The first time she "left"I thought she had died. She had an extremely severe childhood history of sexual abuse. No one in the therapy community was talking about dissociation or how to help. Through trial and error, and some creative ideas from her psychiatrist, we developed a number of strategies. She brought in a music box she loved, and when we played it, she would most often come back, but for those times the music didn't work, gently rubbing an ice cube on her hands was helpful in her "return to the present". Of course, she participated in the planning of this, even bringing her own ice cubes. Later at a major conference on trauma recovery we added frankincense essential oil to our tool kit. Just passing it under her nose or putting a drop on her pulse points and gently inhaling also,was often helpful. She came to view her dissociative episodes as a brilliant survival skill which allowed her to escape her abuse, but she needed to learn to manage them so she could choose whether to stay present, or leave. Thankfully the therapy treatment world has come along way since then.