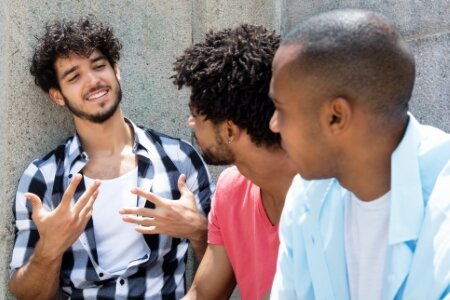 For some couples, being forced into social isolation may have been a positive thing, even with its over-attachment and over-attending. If they’d been stressed earlier about the relationship because they weren’t spending enough time together, it may have come as a relief to work from home, give up the long commute, and pay more attention to the relationship.

Jeeder, Frank and Larry, a monogamous throuple whose relationship was new but solid, had a relatively stable sex life before the lockdown. Jeeder and Frank had been married for 30 years and Larry was their live-in boyfriend. He and Jeeder had bonded over the past year of working from home in their shared office, and been turning to each other for comfort sex. This happened mostly due to circumstance: Frank tended to go to bed early, and Jeeder and Larry stayed up late to watch movies.

After six months with little connection with the outside world, Frank wasn’t just feeling lonely, but also like he could no longer talk to his husband. He began to resent their throuple arrangement with Larry.

Frank didn’t know how to communicate or reconnect. He wasn’t sure how to deal with his slowly spiraling depression or share his sexual needs. He knew that Larry didn’t have anywhere else to live. Kicking him out of their lives during the pandemic didn’t feel right. Plus, Jeeder felt he needed to have Larry around, and they all truly were bonded and emotionally committed; they were a family.

The three had long agreed to be monogamous, to keep their sexual relationship among just the three of them. But during the pandemic, Frank had started going on Grindr, a dating app for gay men. Guys in his local area sent him naked pictures of themselves and asked him to reciprocate. At first he refused, wanting to uphold his monogamy agreement with Jeeder and Larry. But with the loneliness and depression came an impulsiveness and rebelliousness that Frank couldn’t explain.

“At first it was a way of getting back at the both of them,” he said. “They seemed so happy. And I was so unhappy. So, I started sending my pics around. I didn’t feel good about it. But it was a distraction, I guess.”

In a survey by Ashley Madison, a married-but-dating website, 47 percent of members said having an affair helped them get through lockdown and 84 percent considered having an affair a form of self-care. But COVID-related surveys also found that though dating app use for in-person meetings or hook-ups decreased by nearly half, the use of these apps for chatting and texting shot up almost 90 percent. Many dating apps found ways to make accessing potential partners easier, allowing users to change their profiles and indicate that they wanted to “just talk” or “just be friends.”

Lots of users took advantage of meeting just online. They had the experience and support of talking to someone new, as well as the stimulation of an extra-marital relationship, without the same level of guilt that real-life contact can produce.

“I never really cheated, not really. I never breathed the same air as some other guy,” Frank said. “But I sent naked pics of myself and masturbated, a lot.”

For their part, Jeeder and Larry said they were fine with Frank’s solo sexual behavior, but they felt sad that he felt left out and isolated. “We need to reconnect,” Jeeder said. “We need to get back to our intimate lives. We need to find each other again.” Larry nodded his agreement.

Over the last few months, the three of them had begun to talk about how to manage re-entry, now that most dining and travel restrictions had lifted. I challenged them to look more closely at their relationship first, before the added strain of re-entry anxiety and other sexual attractions made things more tense.

“There will be lots of opportunities out there if you want to open your relationship again, or start dating other people,” I said. “But for now, let’s talk about what this past year has done to your sex life and your intimacy.”

“I feel like my sexual desire just evaporated,” Frank said. “Going on the app was the only time I felt anything, really.”

“And I felt like Larry and I kept our energy up for each other,” said Jeeder. “Our sexual chemistry has never been better. Sorry Frank, but it felt great. It was like the only thing we had going during this time. Besides baking sourdough bread, of course.”

But we have also felt a lot of death energy recently. This is also an archetypal energy. This death force has been everywhere, we have all experienced this during the pandemic, even if you or your family haven’t gotten sick or felt it directly, it’s been unavoidable.”

“The truth is I didn’t know how to talk to them about what I was going through,” he said. “It’s very lonely being in a marriage sometimes. Even when there’s three people in the relationship. Maybe I did this to myself, but I didn’t know how to get myself out of the feeling of being isolated in my own house.”

“Actually, though we were having sex, it was mostly just maintenance sex to deal with the stress. I know Frank doesn’t believe that, but we were bored, and we missed Frank, and we were hanging out every night on the couch, and, well, there was nothing else to do!”

Lockdown provoked a wide range of emotions among partnered people, including an increase in anxiety, fear, loneliness, boredom and frustration. It’s been hard on almost everyone. I suggested to Frank and Jeeder and Larry that they begin a dialogue about the gratitude they still felt for each other after all they’d been through.

“What is one thing you appreciate about Jeeder and Larry?” I asked Frank.

“I appreciate that you took care of the house when I really did nothing and was not capable of participating in the household. I really do,” he said.

I asked Jeeder and Larry to repeat this back, to make sure they heard what he said. “So, you appreciate that I took care of things when you were not really helping out?” Jeeder asked.

“Yeah, I was not capable, and I’m sorry,” Frank replied.

“Well, I appreciate that you wanted to come to therapy, Frank—that this is so important to you,” Jeeder said. “And that you are not blaming me or Larry, and that you still love us both.”

Frank mirrored back what he said, and then they both expressed their appreciation to Larry for being there for them through this trying time.

Feeling appreciated and expressing their gratitude to one another seemed to decrease their mutual anxiety and concern about their relationship and allow them to move into deeper conversations about what they each envisioned going forward.

“One thing we want to try is to get more social,” Larry said. “We have totally lost our social skills. If we are going to move forward I guess we should invite some people over, or at least go out for dinner. I don’t even know how to talk to people anymore.”

As the four of us discussed plans for the future, the conversation between the three of them flowed. Of course, there would be more work to do to address and heal the rifts. But it was a good first step back to their essence: that of a loving team.