…And What to Do When It Backfires 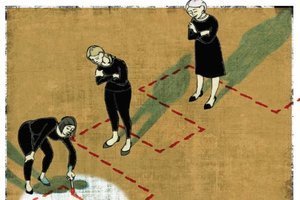 Boundaries bind. They limit, stop, and inhibit. But they also free people up to be themselves. It’s hard to live with them, interpersonally speaking, and even harder to relate well to others without them. They’re at the crux of so many clients’ struggles. With couples, whether the presenting issue is affair recovery or split loyalties in a blended family, it’s the joint boundary-setting skills of two often vastly different individuals that can either expand or deplete their relational resources. Add a people-pleasing partner to the mix and things can get even more complicated.

Over the years, I’ve come to think of myself as a bit of a boundary specialist. And yet, as a clinician, I’ve learned there’s no way to know for sure how relationship dynamics will alter when clients try to do less people pleasing and experiment with assertive boundary setting. Like changing lanes on a highway, no matter how many times you’ve checked your mirrors, setting new boundaries in a relationship involves a degree of risk. In my work with Sophia, helping her assert her boundaries led to an unforeseen therapeutic skid.

Boundary-Setting Differences in a Couple

“My partner, Amy, is angry about my mom,” Sophia told me when she called to set up an appointment. “Since we adopted our daughter, Coco, six months ago, my mother comes over almost every day. We argue about it all the time. Amy has a therapist, and she’s been bugging me to see someone since we met. I probably should’ve done this years ago.” Although the treatment would be with Sophia, we set up a couples session first.

During this initial session, I invited Sophia and Amy to imagine a brief video clip of how they saw themselves in three, six, or nine months’ time. What would change between them when their relationship was more aligned with their desires? What would they be saying or doing? Sophia shared her clip first, stealing quick, nervous glances at Amy, who projected an attitude of controlled indifference. “We’re on vacation. Coco’s building a sand castle. You and my mom are laughing and talking.

“So where are you in this clip, Sophia?” I asked.

Sophia chuckled weakly. “I’m there,” she said. “I guess I’m just happy when everyone else is happy.”

A moderate amount of sensitivity to others is normal and adaptive, but with boundary-challenged clients, relying on others for a sense of self can be crippling. It’s not easy to launch a life from a helipad floating on the random currents of other people’s emotional reactions. For Sophia to set boundaries with her mother, her partner, her daughter, or me in our therapy sessions, she first needed to feel safer having a separate self.

“What about your clip, Amy?” I asked, turning my attention to Sophia’s partner, who’d been sitting stoically in her chair, staring out the window.

“Same thing,” Amy stated matter-of-factly. “We’re on vacation. Coco’s playing. All that’s different is your mom. She’s gone. Not dead, or anything, don’t get me wrong,” she added quickly. “She’s just not there. You and I are the ones hanging out and laughing.”

Sophia felt guilty sharing anything even remotely negative about either of her parents, especially her mother. To undo hardwired people-pleasing survival strategies and the rigid or collapsed boundaries that accompany them, it’s often important to have clients focus on historically overwhelming emotional experiences in the here and now.

My goal was to help Sophia draw on the wider array of resources available to her as an adult, while taking in my care so she could better manage her fear and self-judgement. For the adult Sophia to feel more entitled to set boundaries, it was critical to reconnect with the emotional reality of the overachieving, self-sacrificing child she’d once been and integrate those experiences into her self-concept with awareness, support, and understanding.

When Sophia shared a painful event in therapy—like when her father had locked her in a closet for giving her dolls mustaches and cutting their hair—she’d experience a backlash of shame. “People gave me those dolls, and that’s no way to treat gifts,” she’d argued in response to my words of empathy for that young child in the closet. Gradually, though, even as Sophia excused her mom and dad’s parenting missteps, we made inroads to the raw truth of her childhood.

Repairing the Past in the Present

During one of our sessions, Sophia began talking about her fear of asking her mom to return her house keys. Amy had been getting increasingly frustrated with Sophia’s avoidance of this seemingly simple goal and had recently threatened to change the locks.

Over the course of our work, Sophia had learned to remain present with her sensations and feelings. As she stayed with the physical experience of fear in her body, she was able to locate an uncomfortable vibration, like an electrical current, in her arms and legs. She stayed with that feeling as it spread through her body into something bigger and stronger. She described it as “death by paralysis.” Her legs and arms shook slightly. Suddenly, she winced.

“I remember feeling this,” she said, her voice sounding small and weak. “Driving to church. I refused to cross my legs and sit properly. I was always fighting with my mom about being proper and ladylike. My mom stopped the car and screamed at me to get out.”

“What are you seeing?” I asked.

“Let the emotions surface,” I encouraged. “You’ve held this in for a long time.”

“What does that little girl need, Sophia?” I asked. “Can you check in with her?”

“She needs a loving mother,” Sophia said. “A mom who sees her and gets her.”

“And if you were that mother in this moment?” I asked. “Would she let you comfort her?”

Sophia lifted her hand up and began stroking her own hair. “I see you,” she murmured. Then her face contorted in a fresh wave of emotion. She seemed to be toggling back and forth between two different people, the scared little girl and a loving mother figure. “I’m keeping you safe.”

“Check and see if she can hear you,” I suggested quietly.

After a minute or two, Sophia’s face softened.

“She’s relaxing. She wants me to hold her hand.” Sophia slipped one of her hands into the open palm of the hand resting on her lap, squeezing it tightly.

Zones of Uncertainty and Skids

At our next session, Sophia pranced into my office dangling a set of keys from her index finger and thumb. “I got the keys!” she proclaimed.

“How does it feel?” I asked. I wanted to help her stay in the moment long enough to notice and experience her pride in herself and her sense of accomplishment.

“Scary and good,” Sophia said with a wry smile. “Scary-good. Is that an emotion? I still think something’s going to go wrong, like my mother disappearing from my life. But I also feel strong.” She was beaming.

“Wow!” I leaned forward in my chair, spontaneously clapping my hands. “This is amazing!”

“That’s not all,” she told me, brimming with excitement. “I’m feeling better about drawing the line with Amy, too. Last Sunday, just as we were putting Coco in the car, I told her I wasn’t going to church with her. I didn’t feel like it, so I said I was going for a run instead. I could tell Amy was shocked. I could feel her disappointment, but I stuck to my guns and did what I wanted.”

I smiled broadly and nodded as I listened, swept up by Sophia’s success. We spent the rest of that session thinking of ways to build on this momentum at work and with friends.

But Sophia took me aback the next week with a different announcement. “I feel awful telling you this,” she blurted out. “But I think this might be our last session. My brother and Amy want me to stop coming to see you. They say I’m changing for the worse.”

“What’s your view on it?” I asked, my stomach tightening.

“My brother says my mom’s health has been getting worse because I’ve stopped talking to her as much,” she said without registering my question “Then last night, Amy and I got into a fight. I used to just go numb, but I feel so angry these days.”

We sat motionless in the silence. Had I overdone it with helping her set boundaries and prioritize her own feelings, needs, and preferences? What if her brother was right? Was Coco missing out on precious time with her grandmother that would never be recaptured? And what about Sophia’s relationship with Amy? Maybe we weren’t focusing enough time on processing the anger that was surfacing in our work, anger that was now impacting her marriage. These and other questions washed through me.

The best I could do was let Sophia know her fears made sense.

“The fact that you’re telling me this is huge,” I told her.

“Really?” she said. “I was afraid you’d get mad or offended.”

“And yet you still spoke up,” I said. “That takes courage.”

“I never thought of it like that,” Sophia said, looking relieved.

Many clients, particularly under pressure from partners and relatives, might have ended our therapy at this juncture. After Sophia and I explored her ambivalence about the changes she was experiencing and the ways people in her world were experiencing her, she chose to continue treatment. And I took the opportunity to recalibrate my approach, focusing on how Sophia was setting boundaries and whether there might be more collaborative ways of moving forward with Amy and her mom, keeping her long-term interpersonal objectives in view.

For instance, the day Amy announced her desire to arrange a family camping trip, Sophia was prepared. It was hard for her to speak up in the moment, especially when she felt like a little girl who might get kicked out of a car, but she’d gotten better at soothing her panic in these situations, and she managed to stay present rather than shut down. She’d closed her eyes, grounded herself, and gotten clear on what she wanted to say. “I know you love camping,” she’d told Amy. “But it scares me to be out in the woods, and I’d really rather not do it.”

To Sophia’s surprise, Amy had thanked her for speaking her mind, explaining that she preferred hearing Sophia’s concerns early on in the decision-making process to being blindsided by a last-minute refusal.

I was pleasantly surprised when Sophia scheduled a couples session with Amy toward the end of our treatment. We explored some of the shifts in their roles and expectations since they’d adopted Coco and Sophia started therapy. Sophia mentioned her desire to go on a family vacation to Cape Cod in the summer. To our surprise, Amy had immediately suggested that Sophia’s mother join them for the last three days.

“I can’t believe you’re open to that,” Sophia said.

This blog is excerpted from the article, "The Challenge of Helping the People Pleaser," by Alicia Muñoz. The full version is available in the July/August 2018 issue, "When Depression Comes Back: Going Beyond the Limits of Therapy."