How to Create an Anti-Bullying Support Group

Put an End to School Bullying in Just Six Weeks 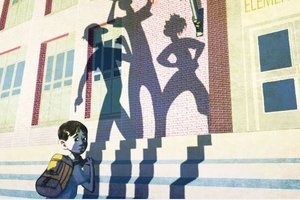 Hi there, This post is a bit older but bullying in schools is always timely. I work at a Middle School and like the comment posted by Jennifer, the difficult kids are not interested in helping out the person who has been bullied. I was thinking of doing a group of kids known to be unhappy in school due to bullying in hopes as they get to know one another and hear each other's stories, they could make a connection as many of the kids being bullied here feel isolated. Has anyone tried this or found another way to approach who to include in the group for the intervention to be effective? I think with younger kids, this is an awesome idea and should be practiced in elementary schools as a standard practice! It might work with some older kids, but a lot of times - the difficult people or the ones perpetrating the bullying have no interest in helping the person who is the object of their bullying. Ideas welcomed!

Hello, my daughter Rachel is 17 years old. She has bullied in school and has always found.d difficulty in found I.g mice appropriate friends. I would like to start a support group. Also, the principal of the school is a bully. I don't k ow where to begin but I can't continue to watch.my daughter suffer.

I read this article a couple years ago and attempted to develop a group modeled after this for a 5th grade girl and it wasn't as easy as I had hoped it would be. I'm wondering if the author or anyone could offer some additional feedback. The girl was largely unliked by her classmates, in part b/c of some anti-social behavior (nose picking) and making racial comments to her peers. The article noted that the group included several students that the child described as difficult to get along with (I assume the bullies), as well as students that observed these behaviors (bystanders) and those the child described as friends. When I collected a similar group for my student, the students whom she found difficult to get along with had more power and didn't demonstrate any interest in helping her to be happy and the observers didn't have enough power to make a difference. She didn't have anyone who could say they were a friend and those that were more inclined to be kind, even to those children who are not liked by their peers, simply don't have the power to persuade the bullies. When I gathered the kids, they preferred talking about the things this child does that are annoying and had difficulty coming up with activities to make her happy. Basically the bullies took over. I'm wondering if it might be better to just include bystanders and "friends" who are willing to help rather than involving children who will work to negatively influence the group to continue the negative treatment. Thoughts anyone?

I am asking for ideas on how to help my 15 year old daughter that is being bullied at school everything was fine until one girl started telling everyone not to be friends with her and basically told anyone that was they were so called "out" no one was allowed to be her friend and they laugh and giggle when she is around and try to make her miserable for no reason that I can understand other than wanting to make themselves feel better she is smart and is very driven and has done a great job so far with trying to just ignore it but I can see its wearing her down and she is depressed and is now hating school and quitting activities that once made her happy because she doesn't want to be bullied. She is becoming more frustrated and I don't know how to help her?

Hello, I am a concern parent and soon to be business owner, that would like to start a anti-bullying group to assist kids that suffers with depression, and other mental issues due to bullying. Peer pressure is all over the world and to strengthen our children, we need to free them from fear. What do you suggest.

Both of my kids, my 14 year old son and my 10 year old daughter, who are both very different and are interacting in very different groups of people, but have 2 things in common besides being siblings and both being my children, they are both nice caring kids and they are both very naturally social kids who feel constant need to spend time with kids their own ages, both are constantly making friends with bullies who show very obvious and disturbing signs of true psychopaths, or as it is referred to in children and teens, conduct disorder. The lack in empathy and concern for hurting other children ( specifically my children) is astonishing and disturbing and I don’t understand how there are so many young children and teenagers who are this way and why my kids are constantly associating with them. I am in desperate need to find a way to help both of my children to make healthier friendships with genuinely nice and caring kids

I am a freshmen at Redmond High in Redmond Oregon, I have been bullied since the third grade. I am trying to build a safe place at my school for anyone being bullied. I would love some ideas. The group/club is called¨The Anti-Bullying support¨ ABS for short.

It's a shame you don't have a donate button! I'd without a doubt donate to this excellent blog! I suppose for now i'll settle for book-marking and adding your RSS feed to my Google account. I look forward to new updates and will talk about this website with my Facebook group. Talk soon!

I am MSW clinical Social Worker, I work with families. Congratulation on your excellent project ! I will share it with the Family Support Groups I conduct. Best wishes. Rosita Arancibia-Kline MSW

Here in New Zealand we call this the 'no blame' approach and it constantly amazes me at how new positive connections are established between the bully/bullies and their victim using this method. Thank you for further evidence to support this approach.

I am a clinical psychologist and just placed an entry on my blog about your piece in this edition of the Psychotherapy Networker, hoping it will reach as many parents and others as possible. This plight of the children who are bullied is only getting more severe with the intrusive, anonymous ease of cyber-bullying. I congratulate you on your success in doing something that seems to be effective! Irit Felsen, Ph.D

Great action oriented and positive approach to helping children be their best selves, Sue. Thanks!