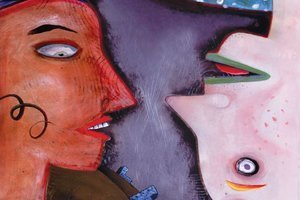 Marcia had suffered from OCD since the age of 11, when she’d woken up one night, panicked that she might accidentally hurt someone. She screamed for her mother, who rushed into her room, stroked her hair, and told her to “think happy thoughts,” while reassuring her that she was a kind, gentle girl, who’d never harm anyone. But Marcia’s fears continued to spin round and round in her head.

Twenty years later, Marcia came to me (Martin) for help, plagued by fears of accidentally mixing cleaning fluid into her 3-year-old son’s oatmeal. “There’s one of those nagging thoughts again,” I replied. “They can certainly be loud.” I didn’t point out that such a mix-up was absurdly unlikely, nor did I explore the feelings or historical meaning underlying her distress. I wasn’t interested in whether she was angry with her son, nor was I concerned about how bizarre her thinking was. My attitude was relaxed and matter-of-fact, in the vein of yeah, it sounds annoying. Now what?

You might wonder what happened to the elements of empathy, reassurance, emotional holding, exploration, rational disputation, and anxiety-management techniques—all standard ingredients of what most clinicians consider good psychotherapy. Clearly, Marcia was a client in distress. So shouldn’t I have offered emotional support and help in understanding the meaning of her problem so she could better cope with it? Well, when it comes to OCD, we’ve learned that these elements of treatment aren’t especially useful, and they often make things worse.

Indeed, over the last 20 years, OCD specialists have come to understand the insidious psychological processes that drive this condition and have developed variations of cognitive behavioral therapy (CBT) to treat it. We call this upside-down therapy, because it’s such a departure from therapeutic staples. In fact, we’ve discovered that it can be helpful not only with so-called typical OCD, which features repetitive hand-washing, checking, or other behavioral compulsions, but also with a subtle form of OCD, which involves only mental compulsions. This form can look like generalized anxiety disorder, depression, agoraphobia, or even PTSD. It can masquerade as extreme trouble over making decisions, constant doubts about relationships, an inability to deal with uncertainty, or being a “control freak” about health or safety or moral questions. Our upside-down approach also helps us work with clients who suffer from intrusive thoughts that feel like impulses to do awful things. Horrified and ashamed, these individuals often keep these thoughts under wraps, suffering for decades without getting effective help.

Much of what we therapists do for OCD sufferers actually worsens the problem. Providing empathic reassurance, rational disputation, and coping skills to manage anxiety only serves to refuel the obsession by giving clients the message that their obsession is important and intolerable, and must be fixed. We call this circular process co-compulsing.

Providing empathy and reassurance comes naturally to therapists. It’s tempting to tell a client who’s obsessed about a mistake he’s made that others would forgive him, or to remind him compassionately that we’re all human. When a client worries constantly that his wife’s upcoming surgery will kill her, it seems supportive and helpful to say, “That doctor’s highly skilled and has an excellent success rate.” We can easily miss that we’re caught up in a never-ending cycle with the client. As we dignify unanswerable questions and attempt to provide certainty or empty reassurance, we drive the client to create ever more elaborate cognitive compulsions.

Co-compulsing can initially seem effective. For example, a client of mine (Martin) blurted, “I know this sounds crazy, but I’ve become terrified that my friend Judy will be hurt if I don’t mentally recite the William Carlos Williams poem ‘The Red Wheelbarrow’ every time I have the thought of her sitting at her computer.”

If I replied using traditional anxiety-management tools, I might say, “Doesn’t harming Judy seem incredibly unlikely, Sharon? When was the last time you hurt someone with your thoughts?” And she might feel temporarily calmer. “Of course,” Sharon might say. “That is pretty outlandish.” But the act of trying to argue with the anxiety-provoking thought gives it gravitas—if I have to vanquish this thought, it must be a big deal—allowing it to rush back as strongly as ever. This is true whether the obsession seems consistent with a person’s values, such as “Will my children be happy?” or abhorrent, such as “What if I killed someone while driving and didn’t notice?”

Are there times when discussion of an issue is helpful? Of course! If a discussion leads to a decision or action plan—and is then put to rest—it’s not an obsession. For example, if a client is worried that his car’s transmission is dying but he can’t afford a new car, a conversation about resources and budgeting can result in an action plan that slows down or ends the anxiety. But when discussions of a client’s worries go round and round, session after session, the content of the worry is likely irrelevant, and it can be tricky for a therapist to catch.

Letting Be, Lightening Up

Upside-down therapy is our integration of traditional evidence-based ERP, acceptance and commitment therapy, metacognitive therapy, and mindfulness-based cognitive therapy. It’s an approach for avoiding the trap of co-compulsing and successfully helping people with subtle OCD.

Upside-down therapy helps clients tolerate anxiety-arousing thoughts (obsessions) and learn to become less entangled with them. It doesn’t delve into meaning, rational disputation, empathic reassurance, or exploration of alternative solutions. It’s about helping clients face their distressingly sticky thoughts and refrain from efforts to fix them. It focuses on acceptance without a struggle. It changes clients’ relationship to their thoughts. Obsessions become less powerful, and gradually fade into the background.

The first task, of course, is to make the diagnosis, so often missed in clients who seem obsessional but whose compulsions are cognitive only with content that isn’t necessarily bizarre. If what looks like an issue returns repeatedly, often in morphing forms, and attempts to explore, reframe, dispute, resolve, or cope with the issue don’t help, then subtle OCD may well be present. It’s time to take the following steps.

STEP 2: Educate the client. I share with the client that people with OCD have a genetic predisposition for their minds to become sticky under stress and fatigue. And we tell them the single most important thing they need to know about the OCD cycle and how to liberate themselves from it: your thoughts get stuck by the force with which you fight them. The solution to overthinking isn’t more thinking, but learning a different way to relate to your thoughts. Just imagine you’re driving your kids on a long trip while they whine and argue in the back seat. They’re safely strapped in, but very annoying. You have to let their complaints go in one ear and out the other because you need to keep your attention on the road. It may be impossible to tune them out totally, but quite possible to let them gripe and not get involved. And from now on, we’re going to treat your worried thoughts as though they’re squabbling kids in the back seat—annoying but not dangerous, and best left alone until they fall asleep on their own.

STEP 3: Use modified ERP. My clients and I agree on a three-part homework program. First, every time they have an obsessional thought, they rephrase it preceded by the words I’m having the thought that. This allows them to label their thought as an obsession, not a genuine issue.

Second, they’re to make a mark on a sheet of paper to tally up the number (not the content) of obsessive thoughts they have each day, and they aren’t permitted to try to answer any what-if questions that come up.

Third, they get an extra mark for recognizing any new obsessional intrusion. They won’t to try to make the thoughts go away or engage with them in any way, but simply to notice and count them. “These marks don’t get you anything except a different kind of awareness,” I say. “This will help you bypass what the thoughts seems to be about and make you less reactive to them. Just count, don’t get all involved.” This is disentanglement.

STEP 4: Be playful. I also introduce exposure treatment with an element of silliness. This, in effect, gives the internal bully a Bronx cheer.

Over the past several decades, it’s become clear that OCD is a complex biopsychosocial disorder, with strong genetic and learning components. It’s a chronic, intermittent condition, which tends to wax and wane over a lifetime and increase during periods of stress, developmental tasks, and change. Recovery isn’t merely the absence of symptoms: rather, a person has recovered when the occurrence of symptoms no longer causes distress, when a stray obsessive worry no longer compels a frantic response, when content isn’t taken too seriously, and when OCD no longer functions as a bully of the mind because there’s no struggle or engagement to fuel it.

People with milder cases of OCD can recover in weeks or months, with or without medication, and can be inoculated for life if they understand that thoughts might well return, but suffering need not. More severe cases of OCD may require sophisticated and complex medication management and more intense, multilayered psychological treatment. Some clients may need multigenerational family therapy or couples work. Not every individual recovers: some people need intensive residential treatment or years of ongoing treatment. But even the most severely affected clients are helped when therapists avoid co-compulsing and teach them to accept their thoughts and shrug at them.

To be sure, upside-down therapy can require clinicians to make a fundamental shift of perspective. After all, it’s practically in a therapist’s DNA to want to wrap our clients in understanding and empathy. We connect, in part, through the process of pledging to help them comprehend and contest their demons. To some clinical traditionalists, we may seem to be ignoring or minimizing their most urgent fears and needs. But that’s the last thing we’re doing. We support our clients with all our hearts and profoundly sympathize with the waking nightmare they’re experiencing, and we tell them so. We make sure they know that we recognize the depth of their suffering. But what we’re not doing is unproductively engaging with the content of their particular obsessions—the fear of harming others, the disturbing sexual thoughts, the repetitive worries about offending friends and family. Instead, we turn the problem on its head, helping OCD sufferers stop battling their inner terrorists and develop a gentler and accepting connection with their minds. The most compassionate path is the one that leads to recovery.

This blog is excerpted from "Upside-Down Psychotherapy" by Martin Seif and Sally Winston. The full version is available in the July/August 2016 issue, OCD: Is There Any Way to Turn It Off?