A Three-Part Approach to Defusing Shame 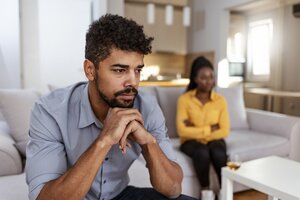 As a couples therapist, I’ve spent a long time working with conflict-avoidant men. I’ve seen how, in session, it can lead to therapy unraveling as frustrated partners rage at their passivity and emotional disengagement. Working with these men isn’t always easy, but I’ve developed a road map that’s helped me expedite what can often be a lengthy and difficult process. It involves a combination of genogram work, strengths-based techniques, and a way to access their shame-based reactions. This is the story of a particular couple that fundamentally shaped my approach.

Tom and Marcia, both in their mid-40s, had been married for 12 years. They had two kids in grade school. A few weeks before they came in for their first appointment, Marcia called to explain the situation. “Tom has mentally checked out,” she said. “Not only does he leave me with the bulk of tasks in running a household, but he’s emotionally vacant. Sometimes it feels like I’ve got a third kid, not a husband.”

When they arrived at my office, both sat in silence for the first couple minutes.

“Tom, Marcia tells me your relationship hasn’t been working for her lately,” I began. “I’d like to get your two cents.”

Tom stared at the ceiling. “I love Marcia and hate disappointing her,” he said, slumping into the couch. “But she’s always picking fights. She can be really overbearing sometimes. I get it—I’m not a perfect husband, but I still wish she’d take her foot off the gas and give me some space.”

“Well,” Marcia interjected, “maybe I wouldn’t need to nag you so much if you didn’t run from every single one of your problems!” She proceeded to list off dozens of occasions where Tom had, in her words, “peaced out” at the slightest sign of discomfort: at family gatherings, parent-teacher conferences, when it came time to make dinner, do household chores, or even take the family dog for a walk. “He says he’ll help out but never follows through,” she added.

Tom sighed, sinking into the couch and folding his arms in resignation. “Here we go again,” he said flatly.

I continued working with Tom and Marcia for a few months before we stumbled upon a turning point. I’d used genograms before in my work with couples to touch on some interesting family dynamics, but this time, doing a genogram allowed us to go much deeper.

We learned that Tom had been especially close to his mother from a young age. But starting in grade school, they began to drift apart after Tom’s classmates started poking fun at him for being a “mama’s boy.” When he got to middle school, he started finding ways to avoid his mother: staying later after school, spending weekends at friends’ houses. Tom rebuffed her attempts to connect with him, as he felt they were intrusive or controlling. He knew this hurt her, but shrugged it off. “I wish things had been different,” he sighed. “But whatever. What’s past is past.”

“Tom, when was the last time you and your mother spoke?” I asked.

“I don’t know,” he grumbled. “A long time ago. Last Thanksgiving.”

“I’m curious,” I continued. “How much would you say you really know about your mom’s life?”

Tom shrugged. It was clear that their relationship hadn’t changed much at all over the years, as much as he wished they’d been closer.  I had a suspicion that, just as he’d been avoidant with Marcia to avoid the shame that came from conflict, he’d been similarly avoidant with his mother, a holdover from his school days when associating with her would make him irritable and ashamed.

I turned to Marcia. “If you wouldn’t mind, I’d like to try an experiment with Tom.”

“Let’s imagine you’re a journalist writing a story about your mother’s life. What kind of questions would you ask her to write that story?”

Together, Tom and I came up with a handful of questions he might ask his mother: What was it like for you to move away from your family when you got married? What was it like for you when I was born? What was the biggest challenge for you as a parent? What did you enjoy the most about parenting? What were your biggest fears? What was your relationship like with your own mother and father? What do you wish you’d done differently when I was young?

“Tom, here’s what I’d like you to do for our next session,” I said. “I know you and your mom haven’t talked in a while. I’d like you to give her a call this weekend. Ask her some of these questions. Keep track of how you’re feeling as you do.”

Tom groaned, but acquiesced. “I’ll give her 15 minutes. Twenty, tops.”

Tom came to the following week’s session looking decidedly more energized. He plopped down in the couch, eyes beaming.

“So, what’s new?” I asked tentatively.

“Well,” Tom began. “I did that homework assignment we agreed on—calling up my mom.”

“Really well, actually,” Tom replied. “We wound up talking for over an hour. I’ve never really done something like that before. Like, really gotten to know her.”

“After they were done,” Marcia interrupted, “Tom and I had a really good talk. He sat me down on the bed and handed me a piece of paper. On it was a list of all the things he wished he’d done better over the past couple months. Honestly, it brought tears to my eyes.”

“I don’t think Marcia and I have really ever talked with each other like that,” Tom said. “At least not since we had kids.”

“To grow, Tom, you’re going to need to keep experiencing these moments of vulnerability,” I explained. “You’ll learn to tolerate this new, comprehensive view of yourself. For decades, you’ve been fighting, burying the feelings that come up when Marcia expresses her disapproval. This isn’t going to be easy, but you’re off to a great start.”

Marcia took his hand in hers, and they smiled.

“All this time, I’d been thinking Tom just didn’t care,” Marcia said. “I don’t think I really understood the effect I was having on Tom’s self-esteem, all the memories and emotions my reactions were dredging up.”

To be clear, Tom didn’t change overnight. He still had loads of work to do. In fact, later in the session, Marcia complained, rightfully so, that Tom had scheduled a tennis game with a friend around dinnertime last week and waited to tell Marcia until the last minute, afraid of how she’d react. But I knew we’d taken a big step forward.

Over the next couple months, as Tom made strides, Marcia learned to be more patient when slip-ups happened. I also coached her in asking Tom questions that would elicit pride, a prerequisite to accessing and healing shame. Questions about the accomplishments he was most proud of. Ones about his personal qualities he liked best, and ones he admired in other people that he hoped to develop in himself in order to become a better partner and father. Questions about adversities he’d overcome and challenges he’d mastered.

Once we’d accessed his pride, we were ready to confront his shame. Together, Marcia and I asked him questions that helped him develop accountability and awareness: What had Tom done that might’ve impacted Marcia negatively? What were some situations where he felt most incompetent? What behaviors were elicited from being in these uncomfortable situations? How did he react to feeling guilty? How did he want to behave moving forward?

A year into our work together, Tom had become less passive and more honest, vulnerable, and accountable. He began focusing more on his strengths, and the moments he disappointed Marcia dwindled. Those that did crop up, they were able to handle without Tom shutting down, retreating inward, or fighting back. The three of us agreed to meet monthly to solidify gains and prevent any relapses that might occur.

Today, I know that to become better partners, some men need to update their frozen-in-time relationships and activate their pride prior to accessing their shame. Not all couples work with men like Tom unfold the same way. But the techniques I used here—and continue to use with many couples—often lead to a positive outcome. I’m here to attest that even the most conflict-avoidant men can access shame with courage, vulnerability, and pride.

Sara Schwarzbaum, EdD, LMFT, is the founder of Couples Counseling Associates in Chicago, where she currently practices. She provides online training for therapists who want to improve their work with couples at the new Academy for Couples Therapists. She's also professor emerita at Northeastern Illinois University's Master's in Counseling Program. Contact: sescounseling@gmail.com