The Mentor Who Changed My Therapy Practice, Part 2 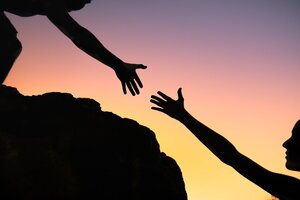 No person is an island. And surely enough, no therapist hones their craft without a lot of learning and inspiration from others. Three clinicians share the personal stories of mentors who helped them become the therapists they are today. Click here to read Part One of this series.

1) Supervision, and a Good Story

Growing up, psychoanalytic theory was my religion. My father, a New York-trained psychiatrist who ascribed to the teachings of Freud, thought psychiatry was what Jewish intellectuals turned to if they loved to study but had no interest in the Talmud. He practiced in an office in our house on Long Island, just off the kitchen. As a workaholic, he was both ever present and never present. When we could snag some time with him, my siblings and I would ask him to interpret our dreams—with often embarrassing results, as they were almost always sexual. I still remember sitting on his office couch, which looked like the 1950s version of Freud’s couch in Vienna, and asking him about what he did in his secret space. In turn, he’d give me advice about my decisions and choices in life.

Years later, while working on my doctorate in psychology, I’d talk about my own cases when I visited him. I continued to do so even up until he passed away, eleven years ago. His perspective was always enlightening and often surprising. He viewed people in a spacious, compassionate way that has stayed with me throughout my therapy career. It’s a crucial part of my work now. His logic in his approach to dynamics was almost mathematical. Not surprisingly, he’d been a math major in college before turning to medicine. His insights derived from my thumbnail descriptions of my own clients were impressive, and reflected his years of complex thought.

But the most valuable part of getting bits of supervision and mentorship from my dad was that he encouraged my work and gave supportive responses to my ideas about my own clients. He gave me the confidence to trust my own intuition and intellect. I felt honored when, sometimes, he’d even share details about his own cases when he had an especially good story to tell. I so miss having his unique perspective, and the joy we both experienced around our fascination with how to best understand people.

2) Standing in the Fire

It’s a wonderful thing to have a mentor, a resource who can help the student transform knowledge into wisdom. As an integrative trauma therapist who works primarily with developmental and complex trauma, I believe mentors are an ethical imperative.

After studying somatic experiencing for three years in graduate school, I began to study with Dr. Stephen Terrell. During one of my student group’s trainings on embodied shame, my classmates and I rotated through the roles of client, practitioner, and observer, with Dr. Terrell at the helm. At the end of the session, we’d all gather to process and reflect on the exercise. Dr. Terrell gave us explicit instructions to welcome whatever showed up.

As my “client” told her story about a shaming experience, I found myself trying to convince her that she wasn’t at fault, that she’d done the best she could. I knew that I wasn’t following those explicit instructions, but I couldn’t stop myself. I was on autopilot. “Sounds like you left your client alone,” Dr. Terrell said during our reflection. “Then what happened?” he asked. I told him that as I’d continued to try to convince the client she’d done nothing wrong, I’d felt as if we were losing connection. “Then you decided to get on a ship and sail away,” Dr. Terrell replied. When I heard this, I suddenly realized that somewhere deep inside of myself I’d believed that my job was to make the client feel better. Thanks to him, I started to understand this for what it was, despite my good intentions: empathic misattunement. I realized then that facilitating healing and making someone feel better are two very different things.

The new awareness that Dr. Terrell provided transformed my work. Now, I find myself standing in the fire of my clients’ pain without shrinking away. In my work with trauma survivors, I’ve found that, for many of them, this joining was what was missing when the trauma occurred. There was no enlightened witness available who could stay connected with them during their pain without pushing it away. Now I know that when I stand with my clients and provide that missing resource, they can have a real healing experience. As the poet Rumi says, “The dark thought, the shame, the malice / Meet them at the door laughing and invite them in / Be grateful for whoever comes / Because each has been sent as a guide from beyond.”

3) An Advocate, in More Ways Than One

Stephen Advocate was my high school therapist. He not only helped prevent my suicide, but helped me come to terms with being gay.

Over the years, we reconnected several times over the phone, but we only finally met again in person 37 years later, when he was 80 and I was 54. I told him how he’d influenced my decision to become a therapist, that I remembered sitting across from him thinking that someday I wanted to be in his chair, helping people with their sexual health they way he’d helped me. Neither of us could stop crying.

Mr. Advocate also disclosed something he’d been going through around the time we first met, something I hadn’t known about. He’d recently divorced his wife, he told me, who was keeping his adolescent son away from him. Having me around back then, he confessed, was like having his son back. Growing up with a father who later abandoned and rejected me, I told Mr. Advocate that he was the father I never had.

Our bond was special and intense. When I became a therapist, I assumed that all teenage clients came regularly and on time. To my surprise, I found that largely wasn’t true. It was unique to me, because I so valued the experiences I had with Mr. Advocate. They were so crucial to my later development.

Before I decided to pursue therapy, I’d been thinking about becoming a hairstylist. I was fascinated with hair. But Mr. Advocate changed the course of who I’d become. Today, I love what I do, and I’m happy that I can make a difference in people’s lives, just as he made a difference in mine.

Click here to read Part One of this series.