The Unlived Lives of Parents 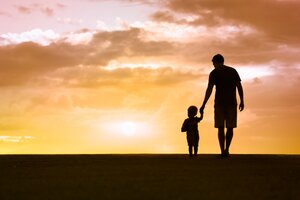 Lionel and Kyra’s son, Tyrone, had significant developmental delays from his premature birth. Now seven years old, he’s playing Little League, but he can’t run as fast as the other kids, doesn’t have good hand-eye coordination, and rarely connects with the ball. “He likes being part of the team, and loves wearing a uniform. It makes him feel that he belongs,” Lionel said to me wistfully in our session. “His goal in life is to play major league baseball.”

“But the fantasy is coming up against reality in a way that really isn’t pretty,” Kyra added.

“The problem is me, not him,” Lionel clarified. “I don’t know how to handle my own reactions. Our coach is an amazing man, loves the kids, loves the game, and for him, it’s about working together as a team. But the coach for the opposing team has a win-at-all-costs approach.

“Last week the game was tied. One hit and Tyrone’s team would’ve won. The other coach looks at the line-up. There are two outs, and the coach sees Tyrone as an easy out. So the bastard decides to intentionally walk the kids in front of him. Now the bases are loaded. Tyrone swings blindly and misses a high ball: strike one. Next pitch, low. He swings anyway: strike two.

“‘Take it easy, wait for a good ball,’ the coach says. Third pitch, he doesn’t swing, and the ump calls it a strike. The game is over, and Tyrone’s in tears, heartbroken. I’ve never seen him look like that—so dejected. His teammates mutter and give him dirty looks.

“Our coach keeps it all in perspective, but I’m livid. I want to kill the other coach, punch him out, curse at him. How could you do that?! How could you treat my kid like that?! Steam was coming out of my ears. Kyra had to calm me down.

“The worst part was that I suddenly realized I wasn’t the dad I’d hoped I would be. I was pissed, and for a short but horrible moment, I turned into my father. Rather than say, ‘It’s okay, son, you gave it your best,’ I yelled at Tyrone. ‘You need to keep your eye on the damn ball, pay attention!’ I’m so ashamed.” Lionel hid his face in his hands. “I couldn’t sleep all night. I’ve been really down since then.”

“How do you make sense of what happened to you?” I asked.

“Baseball was my game. I was hoping to get a college scholarship, but I got anxious when the scouts came to watch us play. When I was up at bat, guess what happened? I struck out. Now here we are again.” Lionel shook his head. “My dad was disgusted with me, called me a loser. I never forgave him for that.

“It broke my heart to see Tyrone strike out. I felt that old shame. I couldn’t bear to see his sadness. I don’t know what happened; I just lost it. And here I was, becoming my father. I never thought that could happen, never!” He paused. “Any good ideas, doc? What can I do not to kill that coach? Or humiliate my kid? Or end up in jail for assault?”

“Carl Jung once said, ‘The greatest burden a child must bear is the unlived life of the parents.’ What’s unlived in you?”  I asked Lionel.

“I had hopes that he would be all that I’m not. That his life would be so bright you’d need sunglasses. That he could do what I couldn’t. And damn, he’s another flawed kid with his own set of problems. I wanted so much for him.”  “You’re not alone,” I told him. “This comes up for almost all parents. Our unmet needs can distort our expectations for our children, causing suffering for them and for us. We often ‘lose it’ when we hit a past wound that isn’t resolved. It’s one thing to know that we have wounds from the past, and entirely another to begin to heal them. The following reflection can help.”

Reflection: The Wounds We Carry

1. Close your eyes and bring your attention to the sensations of your entire body.

2. Take some time and get interested in a hurt you may be carrying from the past. When did it happen? How old were you? Was it from childhood? Adolescence?

3. Stay with yourself. Notice what’s happening in your body. What emotions arise? What are you defending? What are you trying to protect?

4. How do you respond to these vulnerable feelings? Do you turn away? Get lost in thoughts about dinner or your favorite TV show?

5. As you connect with this painful wound, imagine that you can greet it. Say hello. Even shake its hand.

6. Bring some kind attention to this wound. Try to create some space to be with it. You might want to use some words that express a healing and kind intention, such as “May I care for this wound.”

7. Rest for a moment, perhaps putting a hand on where you feel the pain. During the next few days, make a practice of checking in on the pain and repeating the words.

Lionel found this practice challenging but helpful. “I guess I won’t punch out the coach of the opposing team,” he smiled after he’d been practicing for a few weeks.

Becoming a parent gives us a chance to grow by attending to old wounds, including many that we may have forgotten. The aim is not to deny our history, but to understand it and develop a new relationship with it, bringing self-compassion to ourselves in those moments when we lose it.

Adapted from Self-Compassion for Parents: Nurture Your Child by Caring for Yourself. Guilford Press (2019).

Susan M. Pollak, MTS, EdD, is a psychologist in Cambridge, Massachusetts, and the mother of two grown children. She’s cofounder and senior teacher at the Center for Mindfulness and Compassion at Harvard Medical School/Cambridge Health Alliance, and president of the Institute for Meditation and Psychotherapy.