Moving in Our Own Way 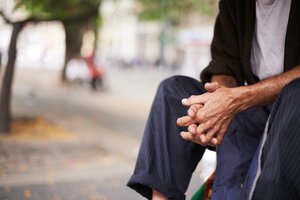 Back in 1979, I was a young dance therapy intern at St. Elizabeth’s, the country’s first federally operated psychiatric hospital, which opened in 1855. St. E’s was also the birthplace of dance and movement therapy. Before it was a formal therapy, Marian Chace, its founder, taught dance to some of the chronically mentally ill patients in her studio down the road. After she worked with them, their doctors noticed they appeared less disorganized, less confused, less depressed, less isolated. They invited Chace to the hospital to tell them about what she did, and the psychotherapeutic use of movement evolved from there.

All my life, I’ve loved to move, to feel a sense of expansiveness and connection unfurl throughout my body. So imagine my surprise as a young intern when my supervisor assigned me to work with a man diagnosed with catatonia.

Mr. Offitzer, a 62-year-old man who’d been living at the hospital for nearly 35 years, was one of my first clients. Because of his catatonia—characterized by rigid, immobile positions sometimes held for days or even weeks at a time—his steps were small, stiff, sometimes darting. With his closely shaved head and yellowed finger tips from years of chain smoking, his frail body almost disappeared inside his lightweight cotton hospital scrubs: a uniform of sorts for the long-time residents.

I’d been told he was selectively mute, but there was little else I knew about him other than he never received visitors, never spoke or made eye contact, and certainly didn’t dance! So how was I going to work with him? How was I going to enter his world and invite him into mine?

For six months, we met three times weekly for 30-minute sessions. Each one would begin the same way: I’d greet Mr. Offitzer and ask him to join me for a walk outside. Every time, he’d silently accept and off we’d go, leaving behind the dark and dreary ward where he and his fellow patients would sit silently for hours.

Together, we’d slowly stroll the hospital grounds, walking side by side. Sometimes, when he paused, it felt like time was standing still. But then, just as abruptly as he’d stopped, Mr. Offitzer would begin to move again. I quickly learned to recognize these sudden stops and starts as symptoms of his catatonia, and did my best to stay present beside him, following his lead, one slow step at a time. When we’d find a bench and sat down for a while, I’d attempt to connect with him by matching his breathing.

This was the start of our dance together. Although it was subtle, and I wondered at times if he was even aware of me at all, I sensed something happening in the wordless space between us. Over time, as gently as I could, I began to introduce more deliberate motion to our dance. I’d reach my arms up or stretch them softly toward the ground, inviting him to join me. I was curious to see his range of motion, after barely moving for so many years except to pace back and forth in a cold, dark, screened-in cement porch.

The first time I tried this, he stared right past me for what felt like forever. As I waited for a response, I worried that, despite the silent connection I imagined we had, the effort was futile. But eventually, he started moving in his own particular way, with small hand gestures kept close to his body. Although I was thrilled to see him contribute movements on his own, the question still lingered in my mind of whether any of this was having an impact at all.

By our last session, Mr. Offitzer and I had developed our traditions: we’d walk and I’d talk, mostly commenting on the sights and sounds around us. I wasn’t always sure, but I believe Mr. Offitzer listened. This afternoon, we took a seat on a bench and silently watched a robin hop across a patch of dirt. I breathed as my dance partner breathed.

When I quietly told him our final session had come to an end, instead of just walking away, as he always did at the end of sessions, Mr. Offitzer turned toward me and abruptly thrusted his arm in my direction, an invitation to shake his hand. I took it in mine, touching him for the first and only time. His skin felt papery, almost cloud-like. “Offitzer,” he said plainly.

I was stunned. This was the first time I’d ever heard his voice. How ironic, I thought, that in our very last meeting, as I was saying goodbye, Mr. Offitzer was saying hello.

What I didn’t realize then is that Mr. Offitzer was teaching me about the art of being with, providing unconditional acceptance without expectation or judgment. He taught me about patience—a challenge for a fast-paced girl from New York City—and what it meant to be attuned to another person. These are valuable lessons I still carry with me today, 40 years later.

As a dance therapist, the skill of attuning to my clients is something I’ve honed over decades. It’s an honor to be able to join with them on this deep, bodily level, to be able to teach them how to use movement and dance to access tensions and patterns that no longer serve them, and, when the time is right, to let go of them. It allows me to understand what clients might be struggling to express verbally or nonverbally, and to empathize.

As with most forms of therapy, at its core, dance and movement are about connection: to self and others. We dance therapists have always known that the body, the physical container for movement and memories, will always be an integral part of healing. But as Mr. Offitzer taught me, movement will look different for different people: sometimes you can hardly notice it at all.

Forty years later, I’m still working in psychiatric hospitals. I consider myself fortunate to have found work that’s so compelling, to still be as passionate about it as the day I first met Mr. Offitzer, when I asked myself that crucial question about how to enter the client’s world and invite them into mine.

Jody Wager, MS, BC-DMT, is a dance therapist with 40 years of experience dancing with clients of all ages and abilities. She’s the director of the expressive therapy department at Dominion Hospital in Falls Church, Virginia, and the immediate past president of the American Dance Therapy Association.

What a joy to finally see an article on Dance Therapy in this magazine. For over 50 years Dance Therapists have been treating patients but rarely receive any recognition in mainstream journals. The field of psychotherapy has finally discovered the importance of the body and movement and could learn a great deal from the experience and practice of Dance Therapists. Thank you Jody Wagner for this article and thank you Networker for publishing it.