Why Most Men Don't Open Up in Couples Therapy 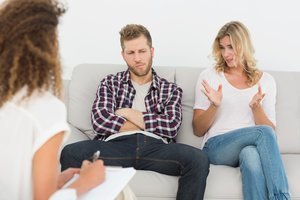 You've heard the jokes. Every couples therapist has skid marks at the front door from husbands being dragged into the office. Or this one: A man is convicted of tax evasion, claiming that he had to do it because his wife spent too much. The sentencing judge gives him a choice: "Do you want to go to federal prison or marriage counseling?" The guy asks, "Could I have a private cell?"

Even highly skilled therapists can have trouble handling male resistance. Some bend over backward to engage the guy, which can make him drop out early, convinced that his wife is the problem. Sometimes frustrated therapists are tempted to do just what men say their wives do: blame them, but in the language of psychopathology—he won't talk about how he feels because he's narcissistic, depressed, passive-aggressive, sociopathic, emotionally unavailable, phobic about intimacy—and that's why therapy isn't working!

It was because couples therapy has such a hard time engaging men that I began what I call "boot camp" couples therapy—a tough, concentrated format, consisting of three eight-hour days with a one-year follow-up. Men seem to prefer this approach to drawn-out weekly therapy with no conclusion in sight. The vast majority of the couples I see are therapy veterans, whose former therapists have thrown up their hands in defeat and referred them to me. When these couples come to my office, the women are exhausted, or bitter, or both; the men cynically describe what they've learned in their previous therapy: "To save my marriage, I have to become a woman."

I typically ignore this assertion because it isn't the real issue. Men don't dislike therapy because they might have to talk like women or adopt feminine sensibilities: what they hate is that therapy forces them to experience that most heinous emotional state to a man—feeling like a failure. Most men dread failure, particularly as providers, protectors, and lovers; their wives' unhappiness makes them feel like failures. Their seeming narcissism and compulsion to be "right" reflect their need to be seen as anything but failures. They sometimes agree that it's better to be a jerk than a loser. "Death before dishonor" isn't a phrase associated with women's groups.

The need to ward off feelings of failure is why many men seem annoyed when their wives are unhappy, rather than ready to sit down and have a long, revealing talk about "feelings." It helps explain why they're more inclined to blame their partners for being too sensitive, too demanding, too selfish, too critical. Such blame temporarily relieves their shame, protects them from emotional reflection, and gives them a sense of empowerment. They can blame people and still be tough and in control. Unfortunately, being in continual blame-mode renders them powerless to engage with their wives or their therapists, or to improve their relationships.

I've developed a manual of self-regulation and relationship skills, which they learn to use during the boot camp. Having these skills in hand empowers them to be the kind of partners they want to be. Men really do want to have a warm and close marriage as much as their wives do, but the way they go about connecting is different. The boot camp shows the couple how their innate styles differ and how they can reconcile their differences to achieve the connection they both want.

Sherry and Carl had been married 17 years, during the last 5 of which they'd been to three experienced marriage counselors. An attractive couple (if you looked beyond the resentment in their faces), they sat on a love seat in my office—as far apart from each other as was physically possible.

Sherry started the boot camp with 15 minutes of the usual complaints about an emotionally unavailable man, but at the end of her list of grievances, sadness overshadowed complaint, when she mentioned something her husband hadn't heard before: "I'm not sure that he loves me anymore."

Their previous therapists had worked hard to teach the couple active-listening, mutual-validation, and other empathy-inducing skills. One had taught Carl a series of "feelings words," so he could better express how he felt and validate Sherry's emotional states.

"He says the right words," Sherry complained, "but it always sounds phony at home, like he doesn't really mean it. He's supposed to say something he appreciates about me every day, and he can't even do that."

"How many times can you tell her she's smart, competent, attractive, and . . . ," Carl grew more frustrated as he forgot the other compliment he was supposed to give. "What else was I supposed to say?" he asked his wife.

"In the therapist's office, he can do it just fine," said Sherry. "He can listen and open up about himself without resentment or anger—everything I want. It's worse to know that he can do it and just won't when we're home."

"I did it already!" Carl said, implying that he'd said the words, paid his dues, and shouldn't have to repeat the performance over and over.

I asked Sherry to think of a time when she'd felt that Carl was understanding her and communicating more openly. It took a few moments, but she came up with a time when they'd been walking by a lake near their house: he'd talked about feeling vulnerable at work; people who'd been with the company for less time than he were getting promotions, while he was stuck in midlevel management.

"I said it'd make me nervous if he was thinking of quitting his job when we had all those bills. And he heard that. He put his arm around me. And we felt connected."

She looked surprised. "He didn't say anything, but I knew he'd heard me and wasn't thinking about quitting his job."

"And did she say that you're a loser at work, and that's why you're not getting promoted?" I asked Carl.

"She said the other people getting ahead of me were ass-lickers, and it was more important to have integrity—something like that."

"You reassured each other," I pointed out. "Carl didn't say anything, yet Sherry felt reassured and said something in return that reassured him. Those are different styles of connection, and you made them fit together."

I mentioned to them that men talk more freely when they feel emotionally connected or when they're doing something, like walking, driving, or playing. The connection or activity eases the transition from their sense of inadequacy to a gut-level compassion for the women they love. It's often said that women need to feel close before they have sex, while men want to have sex to feel close. But the opposite is true when it comes to the verbal communication of feelings. Women expose their vulnerabilities to feel close: they typically call girlfriends and say they feel bad, or they complain about bad things that have happened to them. These gambits interest their girlfriends, who then share similar experiences. But men have to feel close before they can expose their vulnerability. Carl felt close enough on his walk with Sherry that he could express his self-doubt about work and reassure her when she expressed concern.

The reason that Sherry and Carl had felt close in sessions with former therapists wasn't that Carl had been taught the "correct" language; rather, the therapy experience itself—the session—fostered a sense of connection and mutual compassion. His words in therapy, which had pleased his wife, flowed naturally from that experience. The talk had worked because they felt connected, but Sherry and their therapists mistakenly thought that the talk had worked simply because they'd said the right words—a common mistake among clients and therapists.

Now we turned to what makes differing styles fit together. It's often a matter of choice: we consciously choose to feel connected by realizing how much we value the other and deciding to be open and receptive. When Sherry and Carl felt connected, they did so by a choice that came from their deeper values (how important they are to each other), rather than transitory feelings or moods. They signed an agreement that their connection was important to them and that they'd try hard to choose to feel connected, even if their partner exhibited defensiveness, withdrawal, resentment, or anger. Now we had to find ways by which each could make it easier for the other to choose connection.

I asked Carl to come up with mental images of Sherry that would symbolize interest, admiration, affection, gratitude, and value. (He imagined her reading a book, reaching out to hug him, sitting by his side in the hospital after his surgery, and tossing her pony tail as she exercised on a treadmill.) He was to focus on feeling appreciation for her without saying anything. When he felt ready, he faced her, focusing on these mental images. Unencumbered by the task of translating his emotional state into the right words, his expression and body language changed, as if he were seeing her through new eyes. Spontaneously, he turned this emotional state into an embrace. She felt appreciated, even though he didn't state what exactly he appreciated about her. More important was the change in his behavior and attitudes that his appreciation would foster over time. His images were personal and from the heart. Because he liked how they made him feel, he began to conjure them at home without much effort. Appreciation is a part of love that goes beyond words.

Although aware of his love for Sherry, Carl, like many men, underestimated his wife's importance to him: he knew he loved her, but he didn't realize how vital she was to his emotional well-being.

Of course, Sherry and Carl had specific problems—concerning in-laws, parenting, and finances. But as often happens, we didn't need to spend much time on those in the boot camp. The therapists they'd already seen had given them sufficient insight and skills to solve typical relationship disputes. The missing element was skill in self-regulation, to enable them to hold onto self-value and value for each other, when the other's behavior stimulated core hurts. Solving problems is the easy part; holding onto self-value and value for loved ones during hard times and adrenalin rushes is much harder—and much more rewarding.

This blog is excerpted from "Male-Friendly Couples Counseling," by Steven Stosny. The full version is available in the March/April 2009 issue, In Search of a Safety Net: Helping Our Clients and Ourselves in the New Economy.