Therapists on the Fight over Social Emotional Learning in Schools 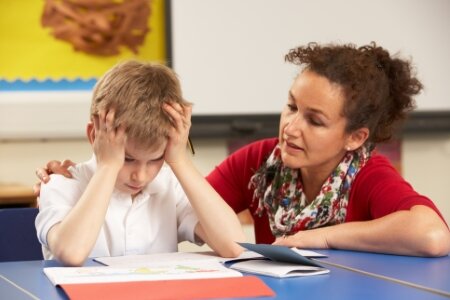 Before he returned to in-person classes this fall, my sixth grader was invited to an online prep-week hosted by his new junior high school. After the chaos of the previous COVID years, I was filled with teary relief overhearing his enthusiastic educators welcome their new students, and knowing they’d soon be taking the reins back from us hapless parents.

Early in the first day, my son’s new math teacher introduced not just the more advanced concepts they’d be exploring in middle school, but also the emotional benefits of mindfulness for countering frustration while they worked on them. Next was the music teacher, who explained how full belly breaths are wonderful for singing and calming an anxious mind. When in the afternoon I caught my son listening with interest to his young social studies teacher, I paused in the doorway and pieced together that the man was working in tandem with a counselor, who was describing the symptoms of depression and explaining who to turn to in a crisis.

That night, I shared what I’d overheard with my partner. “Man,” he said. “That’s a far cry from my eat-or-be-eaten experience of middle school. Good for them.”

He’s right, I thought, especially given the incredible stress kids have been under these last couple of years. But I also found myself with questions. Would all this social-emotional learning (SEL) occur just in this prep-week, or had the very idea of what an educator does changed? Was staff energy now going to be divided between sharpening kids’ minds and their sense of emotional safety?

As a former social worker, I was loathe to admit that as positive as that sounded in theory, it also worried me. Could my son’s academics suffer from all this emphasis on developing his emotional literacy? What if he starts to pathologize some of his big pubescent emotions? And are school staff really experts in such things anyway?

Social-emotional learning isn’t entirely new, but as more districts emphasize the curricula in the wake of COVID, confusion from parents like me appears to be on the rise. And in some communities, parents are doing much more than weighing this new reality: they’re staging entire revolts.

In recent months, a West Bend, Wisconsin, parent called SEL material, “divisive, biased, radically left Marxism,” and insisted on it being expunged from both grade school and high school curricula. A Texas mother calling on her school district to ban it said SEL’s mental health education teachings amounted to “advertising suicide.” An Idaho house education committee member likened it to behavior control out of the pages of the dystopian novel A Brave New World.

When the Pioneer Institute for Public Policy Research, a Boston-based, free-market think tank published a white paper called “Social-Emotional Learning: K-12 Education as New Age Nanny State,” they pointed out that state, local and federal governments have invested tens of billions of dollars into public school SEL programming. But among the institute’s grievances were that these expanding programs threatened academic achievement, student privacy, and health—and they could codify normal emotional challenges, maybe even saddle kids with diagnoses that would follow them for the rest of their lives.

“It’s one thing to direct your own moral, ethical, and emotional development or that of your children,” said Jane Robbins, coauthor of the paper. “But having a government vendor or unqualified public school officials implement an SEL curriculum based on coffee-table psychology is quite another.”

An even more forceful response to SEL has been initiated by a group called Parents Defending Education, whose website contains a section for submitting SEL-related “incident reports.” They say the curricula divides children into “oppressor” and “oppressed” groups and teaches “guilt and shame,” “unhappiness, radicalism, and failure.” They provide materials for opposing SEL in local districts and using the media to “shine a light on political indoctrination in your school.” And they encourage litigation.

A belief expressed by the VP of this group, former Wall Street Journal Reporter Asra Romani, is that SEL developers are using the material as a Trojan horse “to bring critical race theory and LGBTQ+ (acceptance) into the classroom.”

The Radical Notion of Acceptance

Counselor, educator, and suicidologist Araya Baker did graduate work in an SEL lab. He’s not surprised that some are trying to politicize SEL curricula. “The reality is we have a long history of pushback on anything taught in schools without parental consent,” he says. “Take sex ed, for instance.”

Although he doesn’t believe that critical race theory, which is graduate-level material, is actually being taught in early grades, he does say, “Issues around exploring race in school settings and SEL are connected, because SEL enhances the social development of children and improves their interpersonal skills. The byproduct of this is that they get closer to one another, respect differences, and become more amenable to inclusion.

“In general, SEL moves kids away from being preoccupied by what peers say is the norm, and toward being compassionate with the kid who’s different or often left out. Whereas before parents didn’t have to worry about kids connecting them to other parents of a different background, if they’re now dissolving barriers of race, class, etcetera, those parents may also be in a position of having to try to do that themselves to support these friendships.“

When I admit to my knee-jerk reaction of SEL potentially detracting from academics, Baker tells me that, “as adults we’re fixated on ‘the meat’ of core curricula. But for adolescents in particular, any social-emotional dynamic can get in the way of being a successful learner. If an SEL program is efficacious, it both improves these skills and teaches them to be kind.”

Responding to the Changing Nature of Mental Health

Lynn Lyons, a therapist and expert on anxiety in children, had been consulting on SEL trainings in New England before the programs became controversial. She likes to point out the similarities between the SEL content for older grades and that for preschool curricula, which is focused on emotion and learning how to be in relationship with others.

There’s no controversy about teacher involvement, she says, when little kids are first interacting in classrooms. So what’s the problem with reviewing this material in adolescence and teen years, when social and emotional issues can be heightened?

“You’ll find that the vast majority of mental health services are already provided by teachers rather than counselors. It’s wrong for anyone to assume that teachers are suddenly stepping in with mental health resources for no reason.”

“If you ask pre-K to first grade teachers what they’re teaching, they’ll tell you that along with how to pour milk, they’re teaching these kids empathy and sharing and respecting one another. And suddenly when we get to the upper grades, when we really need emotional regulation and appropriate boundaries, we’re supposed to draw some arbitrary line and discount these abilities?

“Social-emotional learning is learning the language of being a human being. Weaving emotion management into teaching, giving kids a consistent diet of emotional wellness, mood management, and social connection is a good thing. If you have a child who’s not getting basic needs met, then of course teaching them geometry won’t work. What SEL means to me is us asking, are kids needs being met in a way that allows them to be available for learning?”

When I bring up SEL critics’ concerns about children being saddled with diagnoses in schools, Lyons says that a big part of her work is ensuring that SEL material is presented in a way that avoids pathologizing and labeling. “When a school is stepping into this area, they better know what they’re doing because we don’t want the staff suddenly saddling these kids with immovable, diagnostic labels.”

When that happens, while some parents might protest a diagnosis, others tend to wield it. “Ten years ago a parent might say to me, ‘My child is anxious,’ but now they’ve gone to another level and say their kid has been ‘diagnosed’ by a pediatrician or a school employee who’s really just identifying that their child has anxiety symptoms. When we allow parents to take on this idea of a diagnosis by someone who’s not a mental health professional, it gets in the way of normalizing what kids are going through. It’s misinformed and overblown. Mental health challenges are not a constant.

“I’m also often struck by how outdated information about depression and anxiety still is, so a lot of the teaching I do around SEL in school is helping staff turn away from the disease model, and the idea of a chemical imbalance that’s permanent.

“We want to inform kids, yes. But if they’re experiencing depression and anxiety in middle school, we need them to understand that it’s really common and eminently treatable. We want to take away the shame and stigma and any sense of permanence.”

“I’ll emphasize to school staff that recent research says talking about supposed biological underpinnings of a mental health issue actually increases stigma. If we talk about the issue’s psychosocial underpinnings, it decreases.

Young people exposed to this information in the wrong way can take these diagnoses and make them an identity. Then it’s ‘I can’t do this because I have anxiety or depression.’

“It’s funny. I’ll ask students what they do to to make their depression or anxiety worse or better, and they’ll get mad and tell me they don’t ‘do’ anything: it’s part of who they are.”

Lyons also tells teachers and counselors and administrators that the accommodation model for other learning problems in schools is not helpful for issues like anxiety. “I’ve seen kids get an anxiety diagnosis and suddenly say ‘I can’t do this,’ whatever ‘this’ is in school—or even go to school—and need to be excused permanently to manage it. But mental health professionals now know that disconnecting from something anxiety producing to manage it is the opposite of what they need.

“So yes, SEL is effective and necessary. But it has to be done right. Everyone involved—teachers, counselors, parents, kids—need to remember that it’s important, and also, language matters.”