How to Find and Reaffirm Shared Values 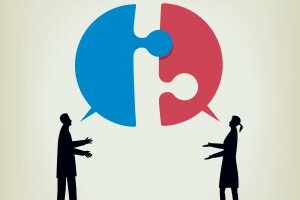 Q: Many of my couples clients differ in their political leanings and struggle around significant political elections. How can I best support them without taking a side or causing more division?

A: As political divisions have intensified in recent years, couples with different political preferences have faced unique challenges. For the roughly 23 percent of married couples who don’t share a political affiliation, disagreements over a party or candidate can easily escalate into personal attacks that threaten an otherwise healthy relationship.

I recently worked with an interpolitical couple who feared the political chasm between them meant they were heading toward divorce. Nicole had always identified as a Republican and Michael as a Democrat. For many years, the focus of their relationship had been on their sense of connection, open communication, and shared parenting efforts. They’d both previously been in unhealthy relationships but had managed to create a blended family filled with love, safety, and mutual support. Multiple challenges, including serious illnesses, had already tested their marriage—and they’d stuck together. As the election year approached, however, things changed dramatically. Suddenly, this couple, who genuinely enjoyed each other, began to question everything about their partnership, from the implication of passing comments about chores to whether they should even be sleeping in same bed.

On the surface, their marriage seemed as doomed as they feared. Nicole and Michael were trapped in a cycle of verbally aggressive arguments in which they each asserted not only the superiority of their respective political beliefs, but the inferiority of the other person. They began asking themselves how they could’ve allowed themselves to fall in love with and establish a life with someone who didn’t share their deeply held values and, worse, who didn’t seem to respect them as individuals. Often in our sessions, one of them would turn to the other and say something like, “If you can vote for that person, with all that they believe in, then how can you possibly value me and what I believe in?”

Initially, I was surprised at how this couple had allowed politics to corrode their relationship, and I myself questioned the viability of their marriage. After reflection, though, I saw that my initial reaction was based on an assumption that I didn’t identify so deeply with my own politics that I’d let a political disagreement change how I view my loved ones. Then again, I share political preferences with my wife and, generally, my extended family. I considered how if my wife and I disagreed over politics I might similarly question other aspects of our relationship. This realization helped me extend empathy to Nicole and Michael and move toward helping them accept the reality of their political differences.

Fortunately, after five of years leading diversity trainings around the country and helping thousands of mental health professionals bridge relational divides and strengthen interpersonal relationships, I’ve learned that many of us struggle with how to navigate the often delicate subject of politics during our sessions. I’ve also discovered that there are techniques we can use to help couples whose political disagreements have caused ruptures to reaffirm their shared values and connection.

This first step is to assess for and validate legitimate feelings of fear underneath aggressive and disrespectful political stances.

When I made time to listen to what both Nicole and Michael were trying to say, as well as what they were hearing from each other, I realized that what seemed like offensive anger and aggression toward each other was in reality a defensive effort to protect themselves from the potential implications of their differing political preferences.

I also recognized that they both feared being rejected by the person they counted on as a primary source of security and connection. It seemed that Nicole and Michael were afraid that they’d be unable to ever again see their spouse in a positive light. No wonder their arguments became so heated; they both perceived acute threats to their most cherished relationship and the loving home they both desperately wanted to preserve.

Listening to them, I was reminded of the adage “Sometimes the best defense is a good offense.” We often protect ourselves from perceived threats through escalating, aggressive attempts to discount the validity of opposing perspectives. It’s a mirror of what’s happening on the political stage these days. But instead of immediately leaping in to correct their aggressive and disrespectful language, I first validated the fear that motivated their attacks.

“I know you want Nicole to understand your point of view,” I told Michael. “You also seem worried that she doesn’t want to understand, which seems contrary to what you valued most about your relationship—being able to risk being vulnerable because you knew Nicole cared enough to try to understand how you felt about things.”

Nicole softened. She turned to Michael and said, “I never stopped caring about you, and I always want to understand you.”

“Thanks for sharing that, Nicole,” I said. “Is it safe to say that Michael is hearing not a sudden lack of concern for his feelings, but a reflection of your own worry that your differences might limit his ability to understand and care about you?”

Nicole looked at Michael and nodded in agreement. They were both quiet, remembering the depth of their love but still unsure how to transcend the seemingly insurmountable political divide.

Bridging the divide between Nicole and Michael meant helping them reaffirm their shared spousal values. An essential step in that process is differentiating each spouse from the political figure or party they support. To begin that process, I made a concerted effort to help them identify as many similarities among their differences as possible. This was hard for them at first, so I tried to get the ball rolling by asking them to describe their ideal community for raising their family and how their past experiences shaped their hopes and desires. After listening to them, I repeated back a summary of what I’d heard each say, focusing on underlying values, not political labels.

“So let me see if I’m understanding you correctly,” I said to Nicole. “You’re voting for your candidate because you have a strong desire to see that more people in our country have good stable jobs, and you want to see those opportunities become available for people in your community and your family, so that they aren’t so worried about their futures?” She responded affirmatively, visibly reflecting that she felt heard, understood, and validated.

Turning to Michael, I said, “Now, if I’m understanding you correctly, you’re voting Democratic because you have a strong belief that our systems are unfair and you want to see more economic opportunities for people in your community and family, so that they aren’t so worried about their futures? Is that accurate?” Michael nodded affirmatively. By framing their desires in those terms, I was able to show them that their shared concerns were larger than their disagreements about which political party had the best path to achieve that outcome.

In the silence that followed, I could sense them letting go of an intense need to shout in order to be heard by the other. For a moment, they looked at one another with a new sense of openness. Although their political preferences hadn’t changed, the implications of those preferences had. They began to see that it was possible that their political differences didn’t mean they were secretly married to a stranger, or the enemy. Instead, by opening themselves to empathy and understanding, rather than defensiveness and vilification, they remembered that they were married to someone who shared many similar values and desires for themselves, their family, their community, and the world. They disagreed over which candidate could best bring about their desires, but the desires themselves were a source of reconnection as we worked further on mutual validation and affirmation.

Finally, we need to empower the couple to take responsibility for the fate of their relationship, rather than leave it to rest in the turmoil of political trends and arguments.

Nicole and Michael were now ready to be become a team and make the most of the opportunities within their control to bring about their desired future. I advised them to resist the temptation to base the fate of their relationship on the efficacy of political candidates, and instead focus on what they can do together to positively impact each other and their family.

Once they left my office, Nicole and Michael would have to navigate a minefield of potential conflicts. What would they do when the news came on TV, for example? I didn’t want them to relapse into fear-based reactions, so I gave them strategies to try. If politics came up, I encouraged them to stretch themselves to describe a perspective different than their own. This exercise accomplished two things at once. First, Nicole and Michael showed each other that they understood how someone could hold an opposing opinion. Second, because each perspective had already been represented, each spouse was less determined to present their own arguments, which prevented conversations from escalating.

I also suggested that they distinguish between minor disagreements and major differences in values. Because Nicole and Michael shared many core values, I hoped that in conversations at home they’d be able to differentiate between their different political preferences and their shared core values. This proved to be difficult for them, and they ultimately decided to save certain conversations for the safety of the therapy session.

Nicole and Michael’s marriage had a strong foundation, and they were willing to do the hard work of trying to improve their communication. Couples who don’t have that foundation may have a more difficult time seeing their political differences as anything but irreconcilable. In those cases, we can try to help them repair their relationships by focusing on helping them see that that fears, not disrespect, motivate their anger.

Today, Nicole and Michael are still going strong, even as they continue to vote for different candidates. Sure, sometimes they’re tempted to fall back into their old pattern when politics come up, but they’re now able to be more patient and respectful toward each other during these difficult conversations, because they know that they both want what’s best for each other and their family. They admit their frustration while reminding each other that their marriage is worth the effort. Sometimes, they’re even able to debate without becoming hostile, and try to “win” not by fully persuading the other but by managing to say things like, “Alright, there is merit to that logic. I’m still not changing my vote, but I can see why you might vote differently.”

As for me, the more I honestly explore and understand my own political preferences and values, the more I’ll be able to empathize with clients’ efforts to sort through what their political beliefs mean for them and their relationships. My goal is to ensure that every client feels empathy, regardless of whether we vote for the same political party, so I model affirming the validity of multiple perspectives. In the therapeutic environment, that means focusing less on justifying laws and policies than on validating the fears, desires, and hopes of the people who promote them. When mental health professionals model empathy despite differences, we plant seeds that can reduce the vitriol in polarized conversations around the world.

Lambers Fisher, LMFT, MDiv, is a marriage and family therapist, adjunct instructor, and national speaker on topic of multicultural awareness and diversity. His “Diversity Made Simple” trainings help increase the cultural competence of professionals in fields of mental health, education, clergy, and law enforcement. Contact: Lambers@LambersFisher.com.