What Therapists Can Do to Help 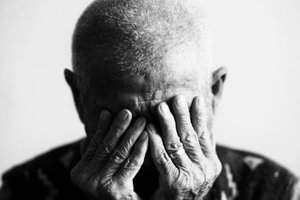 For Americans in distress, wait times for desperately needed treatment programs or a first therapy appointment can range from weeks to months, even for people in the most disturbing of emotional states. For American seniors, these wait times often worsen existing physical problems and prolong emotional pain at a time of life when mental wellness can already be a struggle.

Richard, a retired mental health worker from Medford, Oregon, is no stranger to the healthcare field’s problem of often excruciating wait times for new clients. But when Sandy, his wife of 44 years, was diagnosed in quick succession with leukemia and bipolar disorder two years ago, the issue took on dire new meaning.

Though both diagnoses were worrisome, Sandy’s cancer diagnosis was particularly bleak. She was given 6 to 18 months to live, and when she opted for chemo, which she was told might help her hold on longer, the treatment jump-started bouts of mania and depression.

Sandy’s initial overwhelm at the prospect of dying quickly became a desperate fear that wouldn’t abate. Richard contacted psychologists and social workers under Medicare’s Advantage Plan to get her immediate help. But in and around Medford, a city of about 80,000 people, the help just wasn’t there. Over and over, he was told practitioners were not accepting new patients or that the earliest appointments were months away.

After a worsening Sandy was hospitalized for an acute manic episode, Richard thought maybe the serious nature of inpatient treatment would finally open up some ongoing mental health resources for her. But Sandy’s discharge plan was a single follow-up visit with the psychiatrist who’d diagnosed her. No case management. No individualized treatment plan with regular appointments. Neither, Richard was told, were available.

As Sandy’s physical and emotional health became more fragile, Richard kept looking on his own, but all the LCSWs and PhDs he approached said they were already full. Other counselors that did have room were not Medicare approved.

Eight months after her diagnosis, Sandy was at her oncologist’s office for a routine appointment when a nurse practitioner abruptly asked her if she was afraid to die. This was followed by the news that she had just days left to live. Terribly frightened and sobbing uncontrollably, Sandy was prescribed morphine and hospice care but no counseling of any kind. It was New Year’s Eve and the nurse who later arrived at Richard and Sandy’s home inserted a catheter, gave him instructions on dispensing morphine, and left for a party. Sandy died the next morning with just Richard by her side.

The unnecessary pain that his beloved Sandy endured has turned Richard into an activist. He’s joined with other seniors, including retired therapist Erika Bekermeier, from nearby Ashland, Oregon, to close the yawning gap in mental health care options for seniors.

The two Oregonians are backing a plan that lobbies for Medicare to add mental health counselors (MHCs) and marriage and family therapists (MFTs) to its cadre of providers.

Their work is entwined with the Medicare Access Coalition, a group of counseling and MFT associations that’s behind a charge to pass a bipartisan bill called the Seniors Mental Health Access Improvement Act.

The bill makes special note of the many seniors who live in the 3,000 areas of the country that have severe shortages in the kind of mental health professionals that Medicare currently covers. For example, a full 50 percent of rural American counties don’t have a single practicing psychiatrist, psychologist, or social worker.

The Coalition believes that by adding MFTs and MHCs to Medicare’s provider ranks, the government will gain a windfall of 200,000 more trained mental health professionals. That means more options for rural and urban communities, and it means more professionals with the kind of training to treat addiction and hard-to-reach seniors that could make a dent in the opioid, depression, and suicide epidemics.

“Oregon has the highest rates of opioid hospital stays for seniors of any state in the country. These people are lonely and have no support,” Bekermeier says. Not only is she concerned about her fellow senior Oregonians, but Bekermeier has concerns that the bill—which is similar to other bills that have made it either through Congress or the Senate, but never both—could “drop to the bottom.”

Though the CDC says a fifth of Americans over 55 have a mental health issue, and older men have the highest suicide rate of any age group, Bekermeier believes that seniors’ issues just “don’t have much political cache. And you know, the older I get the more I get the sense from others that seniors just aren’t that important.”

The Medicare Access Coalition is quick to point out that MHCs and MFTs do not represent a lower standard of care for seniors than the practitioners Medicare currently reimburses. Each, they say, obtains a master’s or doctoral degree in counseling, has two years of postgraduate supervised experience, and passes a national exam to obtain a license to practice independently. Both groups, they also emphasize, are licensed in every state to both diagnose and treat mental health issues. They already work in the Veterans Administration, for the National Health Service Corps, and are part of the military’s TRICARE network.

The Seniors Mental Health Access Improvement Act will go before Congress in January with backing from the AARP and NAMI. Bekermeier hopes mental health providers of all stripes will voice their support for it with their own representatives in the ensuing weeks.

“Other therapists can write or call their legislators to help get this bill passed,” she says. “Not only will it create more work for fellow therapists, but it’s also a way to support those many seniors who are so desperate for our help.”

Lauren Dockett is the senior writer for the Networker.

Thank you all for your comments. My name is Jake Jackson and I work for the National Board for Certified Counselors handling federal government affairs. We are a part of the Medicare Access Coalition mentioned in the article. Since I can't reply directly to your comments, I will answer them below in chronological order. 1. The best way to support this legislation is to reach out to your legislators and let them know of your support. Phone calls to Congressional offices are very impactful. Please feel free to use NBCC's action center here https://www.votervoice.net/NBCCGrassroots/Campaigns/58181/Respond This tool will allow you to write and call your Senators and Representatives and tell them how you are being prevented from providing the care that you are qualified to provide by this restriction. Although this tool is on NBCC's site, you can customize any message you send to tailor it to your MFT experience. This is a joint effort by the two professions and we would encourage all counselors and MFTs to utilize the tool! 2. Hi Carol. Your point about being covered by virtually all other insurers is very well taken. In advocating for this legislation, the Medicare Access Coalition stresses this point, as well as educates lawmakers on the qualifications of counselors and MFTs. Some individuals have the preconceived notion that these professions are not as qualified as other Medicare providers. We are constantly working on disproving that myth. I would also ask that you reach out to your legislators (you may have already, because I see you are an NCC and may have gotten some of our communications!) and make them aware of your training and education. 3. Hi Tara. This is a perfect example of how this is restricting care for the people who need it most. As I'm sure you are aware, many counselors and MFTs take the time to gain skills (such as learning ASL) to better treat their clients. As you pointed out, thousands of people receive disability payments because of their deafness, and as a result have Medicare. The exact text that you just wrote here would make an excellent communication to your lawmakers. Not to sound like a broken record, but you all raise great points that Congressional offices would be interested to hear, so I would encourage you to reach out to them!

To Whom it May Concern: My name is Tara Hanna and I am a licensed intern in Las Vegas, NV. I have been wanting to write a dissertation about allowing MFT's to accept Medicaid. My reason is this. I am 1 of 4 mental health professionals in my entire state who is fluent in American Sign Language. Due to the fact many Deaf individuals receive Medicare, you can see my problem. Only one of the 4 signing mental health professionals is a licensed social worker and being that she is Deaf herself, she is always overbooked with Deaf clients. The rest of us have been working pro-bono or reduced fees to assist the Deaf community but the bottom line is, we have a specialized skill in which we would like to be paid an adequate fee for possessing and using. I feel the law needs amended to include MFT's because decades ago, the social work board blocked MFT's from being able to accept and work under Medicare. If you think about it, this was before Baby Boomers entered retirement age, when life expectancy was 65 years old, before the ADA was created and passed in 1990, before ethnics had access to equal benefits, legal opiates were not considered a problem for addiction, and rehabilitation programs were not yet developed. You probably know as well as I do MFT programs have been advanced and have kept up with the times to serve all populations. 50 or 60 years ago, no one thought far enough to accommodate all the changes which have occurred in this country. The point is, there just are not enough social workers to keep up with the demand of human mental health needs. I would like to know more about the studies you have done and if there is anyway possible to add to our list of reason why MFT's need to be included in Medicare populations. I appreciate your time. Sincerely, Tara A. Hanna

Thank so much for bringing light to an issue which I and hundreds of thousands of LPCs & LMFTs have been fighting for for decades. How sad for this woman. I have had to turn away seniors who are so confused as to why as a licensed psychotherapist, I am reimbursed by every other insurance company except Medicare. I have a Master of Science Degree in Counseling and Clinical Health Psychology. My entire graduate curriculum focused on assessing, diagnosing, and treating mental illness. This is true for Marriage and Family Therapists as well. I urge all mental health practitioners to support this bill. Please call your representatives and senators and tell them that our seniors continue to suffer because of political barrier. Thank you Carol Anne Robinson MS LPC NCC CCMHC

I'd love to know if there's a petition somewhere for this act I can sign. I'm a licensed MFT in California and I've worked in hospice previously and seen just some of the need by seniors and their families for quality health care, but I'm not able to provide services for Medicare patients. I would really like to see things change.