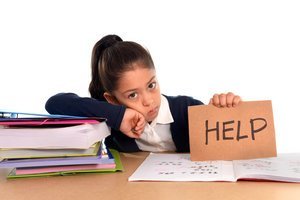 If you work with kids and adolescents, you’re probably no stranger to what these first weeks of school bode for your practice. Back-to-school season can be one of the most stressful periods of the year for a child, no matter what age. From making new friends to dealing with cyberbullies to handling a new workload, the challenges that come with the new school year are plentiful. And they’re equally taxing for parents, who are often unsure how best help their children. Here, three veteran therapists, all of whom know quite a bit about back-to-school anxieties, share the clinical lessons they learned—and a few stories.

1) Provide safety and predictability as quickly as possible

In urban public schools like the one I work at, making the transition to a new grade or new school often correlates with making the transition to a new developmental level, socially and physically. What you’ve come to discover as being a safe, secure environment, such as middle school, can quickly become unpredictable. Some of these kids even worry about whether their arguments on the streets will follow them into the classroom. So, for many, there’s a safety element to the transition. I often see kids who wonder, Am I going to be targeted? Am I going to be exposed? Am I going to have to fight somebody today?

As a clinician, my approach is to try to provide safety, routine, and predictability as soon as possible. I do consistent check-ins with students who come to me for help. I tell them when school activities are going to happen and which staff members will be there alongside them. I can let consistency grow to the point where these kids can learn to trust me. That’s a huge challenge in these places. A lot of the kids I see are probably wondering, Who is this guy? How much should I tell him? Is he going to call Child Protective Services on my parents if I share certain things with him? Is he going to put my business out there? Parents share a lot of these same anxieties, too.

Eight-year-old Michael was transferring to a new school after being bullied quite a bit at the previous one. Understandably, he was worried about being bullied at the new school, too. Michael wasn’t very vocal, so I thought play therapy, which doesn’t rely too much on conversation, would be a good fit.

In our first session, Michael picked up an action figure I had in a toy box. Almost immediately, he put the action hero in the corner of the room and surrounded it with other figurines. At that point, my work became trying to see what he was seeing. “It looks like the whole world’s up against him,” I told Michael. “That must be exhausting. What does the action figure see? What does he feel? How do these other toys feel about him?”

Once Michael acknowledged the parallels between himself and the action figure, who we established was being bullied, we could engage in a conversation about what kind of support system he’d find most helpful. Gradually, we introduced other toys that represented Michael’s parents, and then some that represented his teachers, who acted kindly toward the action figure and reassured it they’d be there for him.

After sharing this progress with Michael’s parents, we decided to tell his teachers about his anxieties so that they’d be informed, active participants in helping him make the transition to a new school. In the end, Michael was able to adjust quickly. He developed a natural resilience to the small amount of bullying he did encounter, knowing he was safe and supported in and outside of class.

Several of my young clients have recently expressed apprehension about going to a new school—particularly those entering middle or high school for the first time. These transitions seem to be particularly anxiety producing. When you’re going into middle school or high school, you’re usually going from being the oldest in your grade level, with a solid group of friends, to being the youngest, and many times less savvy about the new social scene.

One prospective middle schooler I see, Scott, was particularly anxious about whether he’d be able to make friends, and whether he’d like his new teachers. My first inclination in cases like Scott’s is to help the client find a good support system. I decided to reach out to Scott’s school counselor so we’d both be on the same page about his anxiety. I told her about what Scott was dealing with and we agreed to keep an open line of communication. We also decided, along with Scott, that he’d check in with her, as needed, so that he could share his worries, get help, and gradually acclimate himself to the new environment.

Having parents involved in their child’s adjustment to a new school environment is always helpful. A school many of my clients attend allows incoming students and their parents to have a week to visit the school before classes start to learn about their new daily routine. They can tour the school grounds and talk with teachers so there’s less confusion when the school year begins.

Having a big family dinner every night where kids can discuss the issues and challenges they’re facing isn’t realistic for every family. But parents finding time to talk to their children about how school is going, whether during the morning commute or at an ice cream shop their child loves, is always worth the effort.

At back-to-school time, we're giving up our summer routines and are usually still firming up our school-year ones. This can leave kids and families feeling harried as they try to figure out basic schedules. Who's picking up the kids from soccer? What time does that after-school program let out? What should be in the backpack on which day?

I think that kids’ worries about school are grounded in the many uncertainties that come with any new school year. What will my teacher be like? Who will be in my class? Who will sit near me? We can help these kids feel less anxious by saying something like, "The start of the school year is often a disruptive time. Don't be surprised if things feel chaotic for a couple of weeks while you establish a new routine." I think most students feel better after the first day. Even if they don't love the answers they get to all of these questions, it’s still easier to manage a single reality than a thousand “what-ifs.”

But parents still need to be engaged. Last September, I wrote a piece for The New York Times about how, as adults, we can often forget how stressful middle and high school can be. And more than it may seem on the surface, our adolescents often want to connect with us. Posing specific questions usually helps. Asking, “How is that group project going?” or “Did you guys do sprints again in practice?” can move things in the right direction, especially when our tone conveys that we have no agenda or angle to pursue.

- Lisa Damour, bestselling author of Untangled: Guiding Teenage Girls through the Seven Transitions into Adulthood and psychotherapist in Ohio

Hi. Chris. Nice article.When I feel worry, fear and unease, can you call it anxiety disorder? I've read an article awhile ago about xanax.Is it possible to get addicted to xanax?