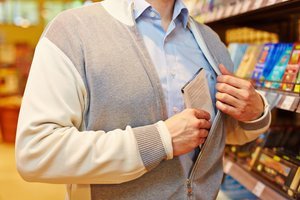 Q: I have a client who's a shoplifter. This is new to me. What do I need to know and what should I do?

A: Before my appearance on Oprah on September 21, 2004, as an expert on shoplifting addiction and recovery, I'd been conducting research on stealing, both professionally and personally, for nearly two decades. I'm an attorney, social worker, and certified addictions counselor. I'm also a recovering shoplifter, having shoplifted from the age of 17 to 25.

By 1990, after two shoplifting arrests, I felt suicidal. I entered therapy for the first time and painfully began to peel back the layers of the onion that had become my life. Gradually, I discovered the same seeds I'd find so often within my own clients: a history of family addiction, repressed anger, shame, and grief with codependent relationships, ignorance, and denial fertilizing the mix. I wanted to stop shoplifting, but kept clinging to it for dear life. Eventually, my therapist suggested that I'd become addicted to it. His words stunned me. Then the light bulb went on: I wasn't so different from my alcoholic father.

In 1992, I founded Cleptomaniacs and Shoplifters Anonymous (C.A.S.A) in Detroit. For the past 15 years, this weekly group has provided ongoing support for more than a thousand people of all backgrounds. C.A.S.A. is one of only a handful of such groups in North America and, perhaps, the world.

Statistics from The National Association for Shoplifting Prevention estimate that 1 out of 11 people in America shoplift: nearly 25 million individuals. The price tag to stores is substantial—more than $10 billion per year. There's no typical profile of a shoplifter. Men and women shoplift about equally. Adults comprise 75 percent of shoplifters. The vast majority of shoplifters (nearly 75 percent) shoplift not out of economic need or greed, but in response to personal and social pressures. It's rarely about the money or the object stolen—Winona Ryder's case illustrated that.

Most shoplifters steal out of feelings of anger, loss, disempowerment, and entitlement, and many become addicted. Therefore, according to some statistics, 69 percent of shoplifters arrested will shoplift again. This kind of stealing is beyond the rare condition of kleptomania—an impulse-control disorder that affects 6 out of 1,000 Americans, mostly women from the age of 20. Yet, kleptomania remains the only officially recognized diagnosis for stealing as a mental health issue.

Employee theft—with which most people have had some "inside experience"—is usually viewed and handled in the same way as shoplifting. The FBI calls employee theft "the fastest-growing crime in America." The U.S. Chamber of Commerce estimates that 75 percent of employees have stolen from the workplace in some form—embezzlement, fudged time cards, padded expense accounts, personal errands on company time, excessive personal phone calls, and pilfered office supplies—and that most do so repeatedly. The American Society of Employers reports that 20 percent of every dollar earned by an American company is lost to employee theft, to the tune of $53 billion per year, in the retail sales industry alone! And 55 percent of employee theft is committed by managers and supervisors. The average time it takes to discover a scheme is 18 months, which is plenty of time to develop a habit or etch a character trait. As with shoplifting, employee theft isn't usually about the money or the items stolen; it's about getting even and entitlement—"they owe me!" Many don't even think of theft from the workplace as stealing.

So who's doing all this stealing and why? What, if anything, is being done other than employing more sophisticated security systems in stores and tougher consequences in workplaces and the courts? Why is this an important—and neglected—issue for clinicians and others in the mental health fields?

There are primarily seven types of people who shoplift. These categories may also be used in a similar way to describe the breakdown of those who commit employee theft.

The common thief/professional—those who are either plain opportunists or who work individually or in "rings" to shoplift goods and then sell or "boost" them for profit. It's a job to them, whether part-time or full-time. Most pros are unlikely to benefit from therapy or C.A.S.A.

Drug/gambling addicts—those who are shoplifting or boosting stolen goods to support an underlying addiction, or to pay off debts associated with their addiction. These people need treatment for the underlying addiction(s) first, but may have picked up a theft addiction along the way.

The impoverished—those who perceive that they need to steal to survive. After an arrest or firing from a job, there may be associated costs and fines; thus, it becomes even more tempting for people to justify stealing.

Thrill seekers—mostly young people who are drawn to various risk-taking behaviors and must be worked with to explore why this has developed and helped to locate healthier, more affirming, ways to "live on the edge."

The absent-minded—mostly older people who are on medications, have cognitive disorders, and need to slow down their pace. Accidents do happen, but tell that to the judge! We're in an age of near-zero tolerance for shoplifting. I've known people who've been prosecuted for sampling grapes!

Kleptomaniacs—those who shoplift impulsively and steal to calm their anxiety. The objects shoplifted are usually discarded or hoarded, or aren't even needed. Treatment is usually a combination of medication and Cognitive-Behavioral Therapy.

The addictive-compulsive—those who may get a rush from stealing, but the stealing mainly is the "cry for help" that's itself the drug. Medication and therapy are often essential, as well as employing ongoing recovery principles and support. Most people addicted to theft behaviors keep their acts a secret and don't connect with other recovering persons; thus, their shame remains intense and recycles.

Everyone likes to get something for nothing—a bargain, a discount, a freebie, a "real steal." But most people who resort to stealing are actually "crying for help." There's something amiss, wrong, unresolved, and absent. The top 10 emotional motivations for stealing are:

1. Anger—to try to take back, to make life fair

2. Grief—to fill the void due to a loss

3. Depression—to distract from sadness, to get a lift

7. Boredom/Excitement—to live life on the edge

8. Shame/Low Self-Esteem—to create a reason to feel bad, or to feel competent at something, even if it's a bad act

Stores, companies, the legal system, and many individuals look at any effort to explain why most people shoplift and steal as merely making excuses. However, in my own life and in the lives of countless others, I've seen how readily people deny their problem and how difficult it is to stop. As with drug- and alcohol-related issues, treatment alternatives are needed, along with legal consequences. The roots of the problem—whether personal, familial, or societal—must be addressed.

For parents raising children—from toddler to teen—when stealing occurs, two strategies should be avoided: "underkill" and "overkill." I believe that stealing behavior is an invitation for a conversation with your child. Sweeping it under the rug or letting it slide sends the message that it isn't a big deal. If discipline, punishment, or consequences seem in order, it's important to teach why stealing isn't an appropriate behavior. I recommend refraining from shaming your child into feeling that he or she is an awful human being, afraid to ever face making a mistake or displeasing you again. Parents must also take a hard look at themselves and admit whether they have directly or indirectly taught their children dishonesty through negative example.

It's vital to assess and treat shoplifting issues with skill and sensitivity and to be open to viewing shoplifting as an addictive-compulsive behavior for which an ongoing recovery program may be necessary. The mental health profession has taken its time in recognizing shoplifting and stealing as both widespread and treatable concerns. Most basic assessment and screening forms ask clients about problems with alcohol, drugs, nicotine, caffeine, eating disorders, gambling, sex, and codependency. If a client admits to any form of theft, it usually falls under "legal issues," so most clinicians miss the opportunity to sift through a potential therapeutic goldmine. It may only be if a prospective client is formally asked, "Have you ever had a shoplifting or theft problem/addiction/disorder?" that the therapist, as well as the client, is able to recognize and speak about theft as a vital, relevant issue.

Many of my clients and members of C.A.S.A. have reported that their therapists didn't know what to make of their stealing, even when they were brave enough to acknowledge it. Therapists seemed surprised or perplexed, made awkward jokes, minimized or brushed the issue off, or, worse yet, became judgmental or mistrustful. It takes an extremely sensitive and knowledgeable therapist to navigate the waters of shoplifting or stealing. Some questions that'll need to be explored in therapy are whether a client should continue to go to stores; whether a client should get rid of the stolen items and, if so, when and how; what the gray-area forms of stealing are that a client needs to be alert to. Of course, another question to be discussed in therapy is how a client can regain the trust of his family and friends.

The "something for nothing bug" has bitten millions of Americans and others around the globe. Society needs to do more than just offer a vaccine in the form of a slap on the wrist, a stint in jail, or a wagging finger. Like any epidemic, the longer we wait, the more we'll all suffer. With more open conversation and more resources available, we'll see a gradual but marked transformation in our society and, ultimately, less theft and fewer associated personal and social problems.

This blog is excerpted from "Something for Nothing," by Terrence Daryl Shulman. The full version is available in the July/August 2007 issue, "Is Your Waiting Room Still Waiting?: How to Create a Successful Private Practice.

Excellent overview. I've had two patients in my 25 year career who revealed themselves to be chronic shoplifters. I wonder how many more remained undisclosed since I haven't been regularly screening for the behavior. Thank you for the article.