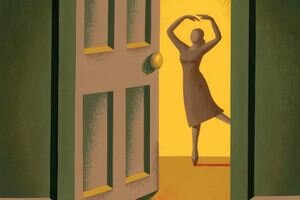 
When my mother was in the second grade at Our Lady of Lourdes elementary school in Indianapolis, she learned a series of goofy, exuberant movements called the Rose Dance. To this day, I wonder who taught her such a funky celebration of body and spirit. Had a freethinking nun replaced the dreary drill of the Baltimore Catechism with a more kid-friendly pastime? I never thought to ask.

Whatever its origins, my mother clearly enjoyed a special relationship with the Rose Dance. From childhood well into middle age, I watched her regularly perform the dance in our living room, her eyes crinkling with pleasure. Sometimes I joined her. When I was a junior in college, I introduced her to my new boyfriend, Dan—the man who’d become my husband—and within the hour, Mom had performed a spirited rendition of the Rose Dance for him. It was an enormous compliment: it meant she felt safe with him.

Mom launched into her signature performance by flinging her right palm upward toward the center of the room, at the same time extending her right foot out in front of her, toes pointed. Then she whipped that leg behind her and lowered her body into a theatrical half-curtsy. In the grand finale, she whirled around, curving her arms above her head and circling the room in a dainty two-step, which convincingly channeled a 6-year-old’s concept of a pirouette. All the while, Mom sang, “Step and dip, step and dip, and turn, turn, turn.” She knew she was being a dork, but that was why she loved it. Her eyes sparkled with a kind of youthful mischievousness that made me happy—and that I didn’t see often enough.

In fact, I had trouble squaring this sunny-spirited, impish Mom with the taut-faced mother who imperceptibly stiffened when she ran into other women in our small town of Chatham, New Jersey.

“Yoo-hoo, Toni!” an acquaintance would trill.

After a beat, Mom would reply, “Well, hello there, Betty,” in an exaggeratedly polite voice, like someone miming cordiality. “How’s every little thing today?” Her smile never quite reached her eyes.

Within minutes—maybe seconds—Mom was wrapping up the conversation. “Betty, I know how very busy you are, so we’ll say goodbye now,” she’d say in her oddly formal way. Taking my hand, she’d walk quickly back up the street.

At the time, I had no idea why Mom turned wooden whenever she encountered anyone outside her immediate family. Much later, I’d understand how little she trusted most people, hiding behind a wall constructed in childhood, when she’d been inducted into the role of family caretaker for her mother and four brothers. Unseen and emotionally abandoned, she spent her life conforming to other people’s rules, believing that few could appreciate her authentic self—warm, zesty, swaying to the beat of life. It was safer to freeze.

But within the four walls of her home, Mom shed her vigilant persona and morphed into a lighthearted girl-woman. At the same time the Rose Dance was making frequent appearances in our living room, my mother was introducing me to dance and music. Timid and awkward at age 10, I began to bloom under her exuberant tutelage. As she sat down at the piano and launched into tunes from an earlier era, I warbled along with her, snapping my fingers. Her all-time favorite was the jazz standard “Ja-Da,” which had been a huge hit in 1918, the year she was born. “Ja-Da, Ja-Da,” we’d croon, popping our shoulders up and down in time with the music. “Ja-Da, Ja-Da, Jing Jing Jing!” She’d close the act with a dramatic flourish of the piano keys across two octaves, flipping her hand so her fingernails brushed the keys and signing off with a flamboyant tinkling of the upper registers, Liberace-style.

Around the same time, my official piano teacher was teaching me the music to the renowned Russian folkdance “Trepak.” Inspired by Mom’s musical audacity, I taught myself to play the piece at double speed, transforming this classic from the Nutcracker Suite into a hopped-up version I called “cartoon music.” Mom cheered me on. When I banged out the clamorous tune for my friends, they shrieked with glee and begged for encores.

By the time I was 13, Mom and I had relocated our makeshift stage from the living room to the kitchen. There, on the linoleum floor, my mother took time from frying pork chops and mashing potatoes to teach me to tap dance. I quickly found out that tapping was insanely more complicated than it looked, and watching my mother execute her swift, intricate moves left me feeling klutzy and hopeless.

“You’re going to get it, Mim,” she said, using the nickname that made me feel special. “Let’s break it down.” With that, she drastically slowed down her tempo so that I could follow each step: “Stomp with your right foot and brush the floor four times with your left. Now reverse. Stomp and brush. Stomp and brush.” One afternoon, I revved up the pace slightly and suddenly, effortlessly got it—like the moment your body learns to balance on a two-wheeler. My mother and I started tapping together, producing hundred of black scuff marks on the linoleum. If Mom cared about her trashed floor, I saw no sign of it.

Next came lessons in the Charleston, during which my mother seemed to levitate across the floor, scissoring her arms and knocking her knees as her feet swiveled back and forth. As before, she repeatedly enacted it for me in slo-mo. Some commingling of Mom’s patience and passion allowed me eventually to execute the moves with something approaching competence. When I got to college, I taught the girls on my dorm floor to Charleston and tap the same way my mother had schooled me, breaking down the furious steps into small, learnable pieces. Pretty soon, I was leading a foursome that stomped and knee-knocked our way through campus, known more for our shameless exhibitionism than any observable talent.

In her mid-70’s, my mother relocated to a continuing-care complex on Hilton Head Island, where my brother lived and the winters were kind. Promptly, Mom joined a line-dancing group, with which she happily sashayed for the next 10 years. On my visits, she tried to teach me the steps, which she executed flawlessly even though the moves changed on a dime. Never mind that I was 30 years younger: I never matched her agility and style.

Of course, this carnival of dance, music, and high spirits couldn’t last forever. As my mother slid into her late 80’s, she developed Parkinson’s disease, a progressive nervous system disorder that drastically curtails movement. Her arms could no longer swing, and her walk became a kind of slow-motion shuffle. Even rotating her head became an effort. Next, her balance began to go. Every now and then, she lost her bearings and toppled to the floor.

Mom dropped out of line-dancing class and began to get around on a cane. Now, her main activities were sitting in her striped upholstered chair, watching TV, and flipping through mail-order catalogues. Within a year, she’d exchanged her cane for a walker. Finally, she became too unsteady to walk at all. At the age of 91, she moved into a nursing home, where her room came equipped with a hospital bed and a wheelchair.

Mom surrendered her mobility under protest. She railed loudly against the limitations of her disease, sometimes simply denying its hold on her. Repeatedly, she tried to liberate herself from her wheelchair, hoisting herself halfway out, until the staff attached a buzzer to her blouse collar to foil further escape attempts.

Finally, hope deserted her. Mom maneuvered her wheelchair to face away from the door so that when visitors arrived, they saw only the back of her head.

Shortly before my mother’s death, my husband and I flew from our Philadelphia home to Hilton Head, deciding beforehand to say our goodbyes separately. When I entered her small room, Mom was silent. The Parkinson’s had done its work: her limbs and face were now as stiff as a doll’s. When I took her hands in mine and told her I loved her, her eyes softened. We gazed at each other for a long moment. Finally, she said in a raspy whisper: “And I love you, Mim.”

As I left the room, my eyes bright with tears, Dan walked in for his visit. When he emerged, he told me that he’d sat across from my mother and tried to talk with her about the four children she’d raised and loved. He spoke especially about Bob, who’d died of an accidental drug overdose in his early 30’s. My husband recounted stories that celebrated my brother’s over-the-top energy and rascally charm, as well as his kindness. Mom looked silently at my husband.

Dan paused, temporarily stumped. Then he asked: “Toni, do you remember the Rose Dance?”

For a long moment, my mother looked perplexed. Then she nodded.

“When you and I first met,” Dan said, “you did the Rose Dance for me. You were amazing. I was so honored. Would you like to do the Rose Dance with me now?”

Interpreting that as a yes, my six-foot-tall husband stood up and began to execute the mincing steps he’d witnessed so often, chanting as he moved: “Step and dip, step and dip.” Within a few moments, something extraordinary took place. Slowly, my mother’s hands lifted off her lap. Each time Dan sang the word “step” and thrust out his arm and leg, my wheelchair-bound mother shakily extended her own arm, and then the other, waving them back and forth in time with Dan’s own gyrations.

My mother’s legs would no longer budge, and her mind was fading, but the goofy ballet of her youth had awakened something in her, something joyous and unbowed. For a few precious seconds, she floated her thin arms through the air, freed of all the limitations the world had thrust upon her.

I’d give anything to have seen that. Still, I can imagine it: Mom performing her final, valiant Rose Dance. She’s 93; she’s seven years old. She’s giving it every last thing she’s got.

Marian Sandmaier is Features Editor of the Networker and a freelance editor specializing in books on psychotherapy. She’s been published in The New York Times and The Washington Post, and is the author of Original Kin: The Search for Connection among Adult Sisters and Brothers. Contact: mariansandmaier@gmail.com.

Tell us what you think about this article by emailing letters@psychnetworker.org. Want to earn CE hours for reading it? Visit our website and take the Networker CE Quiz.