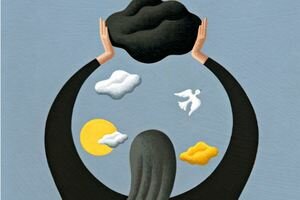 Coming Full Circle: Learning to Choose Where You Look


As we waited in line at our favorite diner, my sister-in-law, Carol, asked what I thought—no, really thought—of her new outfit. Typically a subdued dresser, today she'd shown up in shimmering purples: a violet T-shirt, plum-colored jeans, and lavender plaid sneakers, which she modeled by kicking one foot high in the air. "You fashionista!" I crowed, and we giggled together, as though this were just an ordinary lunch on an ordinary day.

But it wasn't. Three days earlier, I'd gathered with Carol and several other family members around an oncologist's desk. The doctor had gotten right to the point: "The tumor has come back," he'd said. For the past nine months, Carol had been battling Stage 3 ovarian cancer with a gritty, optimistic spirit. She'd just finished a round of intensive and debilitating chemo, and we'd all hoped for a decent reprieve.

Carol's face had turned chalky. "How much time do I have left?" she'd asked the doctor. She'd looked at him steadily, her spine as straight as a ballerina's. He'd ducked his head, scanning his notes. "Six to twelve months," he'd finally said.

On the drive back home, we were mostly silent, squeezing hands and staring ahead. Carol, a Buddhist of 30-some years, appeared calm, though I knew better than to assume that. Her sister, Sally, and her brother, Dan, who's my husband, looked spent and numb. I peered out the car window at the impassive Philadelphia skyline and my mind shriveled to a single thought:…