Sex and the Older Couple 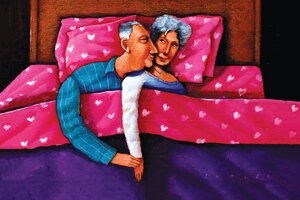 Sex and the Older Couple

“Both,” he answered loudly yet calmly, as his wife, Lorena, shifted in her seat.

In earlier sessions, Cliff and Lorena had admitted to struggling with communication difficulties during their 55-year marriage. Lorena prefers being direct; Cliff not so much. He has a laissez-faire personality, while she’s organized and task oriented. As we talked about their dueling sexual preferences—BDSM vs. missionary-style—I was curious about how their intimacy dynamics were reinforcing the wedge that had grown between them in their later years, and how we could work to resolve them.

As someone who’s specialized in working with older adults for more than 15 years, I’ve come to understand that other practitioners may not delve as quickly as I do into the sex lives of octogenarians. Like many in the general population, plenty of therapists have internalized the common misconception that at a certain point in our lives, humans are no longer interested in sex and intimacy. But much like Cliff and Lorena, many of my older clients are keen to maintain sexual connections.

A recent survey in Clinical Gerontologist echoes this reality. It found…