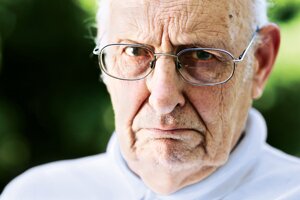 An Angry Client Embraces Therapy at 92

When I first met Stuart, he was 92 years old. His son, a therapist, had seen me at a conference and decided, for some reason, that I was the guy to treat his normally pugnacious but now depressed father.

As I walked into my waiting room to greet them, Stuart wasted no words. “I don’t know why the hell I’m here,” he said, scowling.

Stuart’s son, Matt, broke in. “My father’s gotten very depressed. He’s withdrawn from interacting with me, my sister, and his grandchildren. He’s even withdrawn from my mom. But I think you can help him.” He turned to Stuart. “Dad, I’ll stay in the waiting room.”

Sitting across from Stuart, I didn’t feel what you often do with someone who’s depressed—a kind of depletion of energy, a sense of despair. Instead, I got a feeling of someone who just didn’t give a crap. Because he had a reputation as one of the most aggressive litigators in the Los Angeles area, I decided to take a low-key stance. “So what do you think is going on?” I asked.

“I think you therapists are idiots,” he said, waving his hand dismissively. “This is all useless.”

“Well, let’s just talk about what’s going on in your life,” I responded.

“Nothing,” he said. But after some prodding he told me that a few months ago, his wife had been hospitalized with pneumonia. When she’d recovered and came home, he’d become fascinated with the law books he had lying around the house, and was now spending most of his waking hours immersed in them.

“Yeah?” he retorted, leaning forward a bit, ready to spar. “What’s so interesting about that?”

I said, “Just that you’d start studying so much, all of a sudden.” He stared at me. I pressed on: “Would you be willing to answer a few questions? I know it sounds weird, but I’m trained as an attachment researcher, and I do this thing called the Adult Attachment Interview (AAI), where we just kind of talk about your memories of childhood.”

“Look, I’m 92,” he said with disgust. “Why would I care about what happened in my childhood?”

I shrugged casually and responded, “I don’t know—you might just find out something about yourself.”

“Okay. Whatever,” he acquiesced, throwing up his hands.

So I went through the AAI with him, and what emerged was a classic portrait of what’s called “dismissing attachment.” The two hallmarks are not remembering much of your childhood and simultaneously insisting that your childhood had no impact whatsoever on your development. Basically, you dismiss the importance of relationships. This became clear when I began to ask Stuart about what he remembered about growing up. “Didn’t I just tell you I’m 92?” he spat.

“I know 92-year-old people who remember a lot about their childhoods,” I told him calmly. “You don’t. And that’s just interesting.”

“What’s so interesting about that?” he snarled.

“Well,” I said, “your wife got pneumonia and then you immerse yourself in studying for hours on end. Your son says you got depressed, but you don’t seem depressed to me.” He made a show of aggrieved patience. I continued, “So it’s interesting that your AAI suggests you might have reacted to early experiences in a way that, to put it simply, shut down half of your brain.”

“To put it simply,” he said immediately, “you’re a moron.” Then something shifted in his expression. “Which half of my brain don’t I have?” he asked. For the first time, there was no trace of contempt.

“I know you have your left half. That’s for sure,” I told him.

He cocked his head slightly and asked, “Which side is that?”

“It’s the side with all the L’s,” I said. “It develops later, it’s logical, it has a kind of linear approach that uses language and deductive reasoning, and it likes making lists—like the one I’m making now. The right brain, on the other hand, is where feelings are initially activated, and in a raw, immediate way, more directly reside.”

I could almost see the pugnacity drain out of him as he sat with this for a bit. Finally, he said, “There’s this guy, Bill Smith, who started my law firm with me 60 years ago. He’s developed cancer, and he’s dying.” He paused. “And I don’t feel anything. My whole life, my whole life, people have said to me, ‘Stuart, how do you feel?’” He shook his head. “I have no idea what they mean by that question.”

At this, I sat back slightly, taking in the vulnerability I sensed beneath his confession. Then he surprised me further with a request. “Can you help me?” he asked. “To feel something?”

“I don’t know why you’d want to change anything, Stuart,” I found myself saying. “You’re 92, after all.”

His forehead wrinkled. “You think it’s too late?”

Sticking with my paradoxical approach, I answered, “Well, I don’t know if it’s too late, but you’ve done so well all this time with half a brain.”

With a sudden sense of urgency, he said, “But maybe before I die, I can find out what that question really means, ‘How do you feel?’”

“Maybe it’s possible we can develop the other hemisphere,” I told him. Aware that Stuart didn’t have all the time in the world, I suggested we meet twice a week.

What have you done to my husband? Did you give him a brain transplant?

So we began to do everything you can imagine to activate his right hemisphere. We did nonverbal game-playing, where I asked Stuart to use different tones of voice and facial expressions. We did pantomime. We did exercises to activate autobiographical memory. Since you can’t retrieve a right-hemisphere memory that’s never been encoded, we had to start this very simply. “Tell me what life was like this morning when you woke up,” I’d ask. “Which sock did you put on first? How did you pour milk on your cereal?” By paying attention to this kind of daily activity, slowly Stuart began to develop his capacity for autobiographical memory. Of course, he thought this was all stupid, but he went along with it anyway.

Then one afternoon, Stuart came in and told me that his grandchildren were going skiing and it was making him feel worried. My heart bumped a little: he used the word feel. “What are you worried about?” I asked.

He thought for a moment and said, “I don’t know. Something about the skiing,” and I flashed on his AAI, when he’d told me that his brother had been in a skiing accident when they were kids and lost a leg. When I’d asked Stuart how he’d felt about his brother losing a leg back then, he’d said flatly, “Nothing. He had another one.”

“You told me about your brother losing his leg,” I said to him now. “I’m just wondering if you’re worried about your grandchildren going skiing because you have some leftover feelings about that.”

Tears sprang suddenly to Stuart’s eyes. After a moment, I said, “Do you think you have leftover worries about your brother’s leg?”

“Oh, no. He’s fine,” he said. But once again, he got teary. “I just can’t believe you remember what I say to you,” he added softly after a long pause.

Whoa, I thought. And we just gazed at each other.

At the end of the session, when we shook hands goodbye, Stuart put his other hand on top of our clasped ones and said, “This was amazing.”

In the sessions that followed, I continued to feel like there was now a “we” coming together. Then one morning, about six months into therapy, Stuart’s wife, Helena, called me. “Dr. Siegel,” she said, “what have you done to my husband? Did you give him a brain transplant?” She was joking but not joking.

“Because he’s like a different person,” she answered. She paused a moment. “Some friends moved away the other day, and I put my arms on Stuart’s shoulders to offer a bit of comfort. And he said, ‘That feels good.’ I said, ‘Would you like a shoulder rub?’ And he said, ‘Yes.’” Helena’s voice went thick with emotion. “That’s the only time in 65 years of marriage that he’s let me give him a shoulder massage.”

My first thought was God, why did she wait around for 65 years? But that’s a whole other story.

When Stuart came in next, I told him, “Your wife called.”

“So what’s the story with the massage?” I asked.

He went silent a moment, then said, “You really wanna know? What we’re doing here, this therapy thing . . .” In a flash, the bellicose litigator reappeared. “First of all, I don’t know why it’s taking so goddamn long. We’ve been working at this for what, six months? I thought it was going to be six weeks. Are you just trying to get my money?”

I said. “But no, that’s not why. Therapy usually takes a while. In fact, a lot of people would have to spend six years doing what you’ve done in six months.”

His face softened a bit and he said, “Really? Well, maybe I’m just very motivated because I don’t have that much time left. It’s just a very different feeling to be, uh, alive like this.”

I circled back. “So what’s going on with the massage?”

“You know what happened to my mother?” he responded. I nodded because he’d told me earlier that she’d died when he was young. “It was so painful,” he continued. “And then my father just stopped talking. He didn’t take care of me.” He stared at the rug. “So I decided that I’d never need anyone again. And that’s why, when my wife got pneumonia, I just had to disappear from everyone.”

I stayed quiet, wanting to give him a chance to take in the full impact of what he’d just said. “But with what we’re doing here,” he went on, “I feel I can need people now. I could let Helena massage me. I could let it feel good. And what I want to work on now,” he said, his voice gathering energy, “I want to work on joy. I want to have joy in my life before I go.”

Stuart and I worked together for several more years. He died recently, at the age of 99, having achieved his goal of contacting joy. One of the last times I saw him he told me, “You know, none of this would’ve happened without getting the other half of my brain back.” He looked at me with a kind of wonder, then his eyes crinkled. “And just to set the record straight, you’re not a moron,” he added.

No compliment I’ve ever received has touched me more.

Daniel J. Siegel, MD, is the cofounder and executive director of the Mindsight Institute and the author of many bestselling books, including Aware: The Science and Practice of Presence.