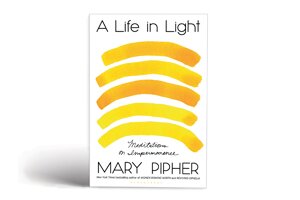 Leaning toward the Light: Mary Pipher Turns Her Gaze Inward


A Life in Light: Meditations on Impermanence

By now, most therapists are familiar with the Buddhist principle of impermanence and the attendant, elemental importance of embracing the present moment. This teaching seems profound, difficult, and necessary. The trouble is, our culture has so thoroughly tamed and commodified it that it’s devolved into a kind of trope, just one more self-help tool to lead us toward the promised land of wellness.

Mary Pipher refuses to dumb down what it takes to create a rewarding life. In her luminous and unflinching memoir, A Life in Light: Meditations on Impermanence, she traces her own journey, one marked by early trauma that sometimes shadows her even now, in her mid-70s. If this book has an overarching theme, it’s the interplay of darkness and light in every life, and her own choice, repeatedly if not always readily, to move toward the light without banishing the shadows.

Pipher, a clinical psychologist, shot onto the national stage in 1994 with Reviving Ophelia: Saving the Selves of Adolescent Girls, which topped the New York Times bestseller list for 26 weeks and has been translated into some 20 languages. All told, she’s written 11 books on topics ranging from female aging to climate grief to the needs of refugees. Without ever seeking fame—or even wanting it—she became and remains a kind of intellectual celebrity, a go-to source of clarity on the impact of power and culture on our health.

Now, Pipher turns her gaze inward, trying to untangle how she managed to survive, and then truly thrive, in the wake of a harrowing childhood. Growing up in a small town near Denver, she describes herself and her two younger brothers as “free-range children,” roaming about on their own and nominally under the charge of a series of indifferent caretakers, while their mother pursued medical school studies and their father was away, fighting in the Korean War.

As it turned out, those were the halcyon days. When Pipher was six, the family split in two, with her father taking her and her brother, Jake, to live in Missouri, while her mother and other brother remained in Colorado. The separation was presented to the children as a temporary but necessary measure that would allow their mother to complete her medical internship with fewer family responsibilities. Young Mary was brokenhearted. She begged her mother to let her stay with her, to no avail.

For the next year, Mary lived in a cramped, dark trailer, where she shared a tiny bedroom with her father and brother. Her dad was sometimes there, sometimes not, often arriving home late at night after drinking with his buddies. Mary and Jake wore ragged, ill-fitting clothes to school and sometimes went to bed hungry. But the emotional toll was the worst: Mary yearned for her mother. There was no telephone in the trailer, and she doesn’t remember getting any letters from her mom. She writes, “I felt sad, confused, and not quite in my body,” a feeling that her child-self thought of as “squishy.” It sounds a lot like depression. That year, she didn’t grow at all.

Even after the family reunited, trouble persisted. Her father became increasingly angry and agitated. His drinking worsened; he and her mother fought nonstop. Then, one night, in Mary’s presence, he picked up a large cast-iron skillet and hurled it at his wife. “It whizzed so close to her head that it ruffled her short hair. . . . We all knew he could have killed her.” The marriage lurched on.

There are more episodes of fear, confusion, and sorrow in Pipher’s childhood—and in her adulthood, too. But if this memoir sounds like a downer, it emphatically is not. Repeatedly, she makes use of her difficulties to bring forward her most passionate message: while each of us will encounter our share of loss and darkness, we can always choose to move toward what nourishes us. Awe, delight, and connection are enduringly available to us. There’s nothing glib or candy-coated about this assertion; Pipher has lived its truth.

For her, light is not just a figurative need, but a literal one. “I am a solar-powered person,” she writes, and she has been ever since being holed up in that murky, claustrophobic trailer. She tells it straight: “I cannot stay long in a room without a window. . . . I would rather shovel horse manure outside than work in a cubicle or back room of a store.” She seizes every opportunity to experience sunlight, moonlight, starlight, any light at all that emanates from the natural world.

In fact, every element of nature seems to give Pipher solace and joy. Her relationship to the planet is primal and exuberant, and some of the best writing in the book reflects this felt connection. She evokes a sunset as “these pink and orange silk scarves of sky.” Later, describing a walk through an old-growth forest, she writes, “The wind played a scratchy sonata as it moved through the branches.” There’s hardly a chapter that doesn’t include some small, radiant encounter with the natural world: the sight of mourning doves and juncos holding an impromptu convention on her porch, watching the afternoon sun set a crimson maple tree aflame, making sustained eye contact with a weasel. These instants at once soothe, enliven, and ground her in the precious present. Nature is her medicine.

If the natural environment fills Pipher with wonder and gratitude, human beings have saved her from despair. She takes the time to honor the individuals in her life—nearly all women—who sustained her in her youth. Her relationships with certain relatives, teachers, and neighbors seem to have been not just consoling, but genuinely therapeutic. In one tenderly written passage, Pipher describes how she and her maternal grandmother would regularly pull up two chairs under an ash tree and spend the afternoon destemming gooseberries or shelling peas. As they worked, young Mary would talk about whatever was important to her, while the older woman would listen attentively. “Through her eyes, I began to see myself,” Pipher writes. “Grandmother . . . did the hard work of loving me into existence.”

As I read along, something niggled at me, less a criticism than a wish. As a writer, Pipher has a genuine gift for evoking the small, singing details of her environment—autumn sunshine the color of butterscotch, the sweetness of spring strawberries. But when she describes relationships, she tends to report on interactions from a slight distance, rather than thrusting readers into here-and-now encounters that brim with dialogue, tone of voice, and body language. I wasn’t aware of missing this element until I came upon a moment in which she does let loose with a vivid interpersonal scene—one that takes place at the University of Nebraska when she blurts to a fellow grad student that she’s attracted to him.

“I looked directly at Jim and said, ‘I’m starting to have non-study buddy feelings for you.’ Jim looked up at me. I made a palms-up hopeless gesture and looked away in embarrassment. . . . When I finally looked into his face, I could tell he was struggling. . . . Finally, he said gruffly, ‘Dammit, so am I.’”

As Pipher moves toward middle age, her life brims with satisfactions. She’s married to the man she loves (gratifyingly, it’s Jim), builds a rewarding therapy practice, raises two children, and regularly dances to her husband’s bar band, the magnificently named Fabtones. Then, unexpectedly, the light dims. Reviving Ophelia hits the bookstores and Pipher becomes staggeringly famous. She’s the first to acknowledge her great good fortune. But then she takes us on a guided tour of the underside of celebrity, where she’s endlessly bombarded by requests to speak, sit for interviews, consult for organizations, cowrite books, give readings, and meet more fans. For a self-identified introvert like Pipher, the experience is profoundly draining. Crisscrossing the country repeatedly, she spends endless hours in noisy airports and cramped planes and bad hotels. She gives us a felt sense of her altered life in a single, stripped-down sentence: “One year, I slept more in hotel rooms than in my own bed.”

Exhausted by the unrelenting demands and separated from the quiet, restorative pleasures of home, Pipher’s body and spirit begin to protest: she develops insomnia, high blood pressure, and chronic anxiety. “As my public persona grew, my real self became smaller and more fragile,” she writes, and finally, when she musters enough of her authentic Mary to begin to appropriately protect herself, the reader wants to cheer out loud. For anyone tempted to romanticize fame, or who might crave it for themselves, Pipher’s account of her experience is instructive.

This stirring book is a memoir, but it’s more than that. Pipher is both honest enough to tell her unadorned story and too generous to focus solely on herself. Every now and then, she addresses readers directly, gently encouraging us to discover and move toward our own particular sources of light, especially when we feel most vulnerable. The idea isn’t to expel the shadows but to sit with them a while, granting ourselves the space to notice that the thing we most crave—this person’s love, or that kind of career achievement, or better health, or whatever it is—has somehow become a condition of our happiness. We don’t need to relinquish the wish—probably we never will—but we can let go of the howling, inconsolable need. We, ourselves, can lighten up.

Once, in a different context, Pipher said that she didn’t think of herself as a Buddhist, but rather “Buddhish.” That seems right. In my reading, at least, it’s a way of saying that we’re not going to do this hold-the-light-and-dark thing—or anything else—with distinction or consistency. During her Reviving Ophelia days, Pipher got lost for a while, and then she reclaimed herself. That’s how we do it, she’s saying. We take wrong turns. We reorient. We confront loss, again and again. Part of us will always be six years old, seeking solace and love. It’s okay. If we slow down and begin to pay close attention, we’ll find enough of what we need to sustain us.

Marian Sandmaier is features editor of the Networker and has written three books on psychology and behavior. She has recently completed a memoir.