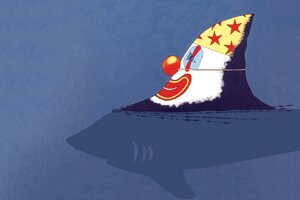 What Lies Beneath a Couple’s Jokes


On a brutally hot August day in Florida, my husband and I were returning from a very stressful visit to my dying father. Worn out and beaten down, we boarded the plane and discovered that our seats were in the last row—the ones that don’t recline. Then, the pilot came on the intercom to tell us that the flight would be grounded for a few hours. When the air conditioning broke, I teetered on the brink of the biggest meltdown of my life. My husband turned to me, raised an eyebrow, grinned, and said: “It doesn’t get much better than this.”

I exploded in laughter; we both did. Suddenly, the heat didn’t matter, the delay didn’t matter, the emotional exhaustion didn’t matter. In that moment, all that existed was the laughter and each other. In a few seconds, humor had taken us to a new place of transcendence and joyful bonding.

Throughout my years as a couples therapist, I’ve wondered why so little attention is paid to the role of humor in intimate relationships and couples work. Beyond a small body of literature, most notably the work of researcher John Gottman, humor isn’t considered a major factor in therapy, and it’s rarely, if ever, taught. Those of us who use humor in the therapy room don’t talk much about it—maybe because we’ve been led to believe that it has no place in clinical work, or that we should view it as a defense mechanism, even though it’s often an integral part of a couple’s relationship.

After all, humor is inherently co-created: it…