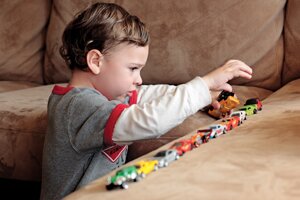 
Prolific author and autism-rights advocate Temple Grandin was diagnosed with autism in 1950. At the time, before the full autism spectrum was well understood, rates of autism were thought to hover around .04 percent, or one in every 2,500 people in the U.S. As a young child, Grandin couldn’t speak and would communicate only by screaming. Her parents were told to come to grips with the possibility that she might never talk.

During this time, she was the recipient of what she calls ABA-type treatment. The ABA she’s referring to is the most common form of play therapy for young children on the spectrum today: applied behavioral analysis. Grandin finally began speaking at three and a half, a few years before the techniques that would become ABA were officially defined. She attributes the behavior-focused interventions, along with consistent correction from adults on how to meet social expectations, to her being able to start mainstream school at age five.

Today, one in 44 U.S. children receive the diagnosis of autism spectrum disorder, and resources for families abound. But after a push in the last two decades to get insurance to pay for autism treatment, ABA’s behaviorally focused play became the most widely covered intervention. Effective at improving communication skills, like making eye contact and smiling during conversation, it’s been shown to help reduce telltale autism spectrum behaviors, or stims, like making loud noises and hand-flapping. Increasingly,…