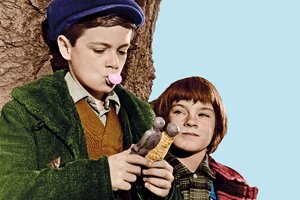 When Siblings Parent Each Other


I was seven years old and my brother, Kenny, was ten when our parents, each in their own way, disappeared. It was the summer of 1990, and Kenny and I roamed freely around the house. In matching bowl haircuts and hand-me-down clothes, we smoked our own birth cigars, which we discovered in the bottom of an old cedar chest. The “It’s a Boy!” and “It’s a Girl!” cigar boxes lay empty in the bushes as we sat atop our treacherously slanted roof with a lighter, but I wasn’t afraid: I was with my brother, and we were on our own.

We repeatedly watched To Kill a Mockingbird on a dusty VHS tape with worn ribbons and poor sound quality. We related to Jem and Scout, the wild siblings who lived in poverty and didn’t have a mom. Scout became my role model, and Jem personified my devotion to Kenny. We memorized the dialogue in the movie and would recite our favorite lines, such as “My Lord, Aunt Stephanie! You almost gave me a heart attack!” and “Cecil Jacobs is a big, fat hen!” Most of all, we envied them because they had a father.

The previous year, our father had had an affair and fathered a child. He was covertly paying a considerable amount of monthly child support, which I later learned was partly blackmail money. No one in our family would discover the affair, the child, or where the money was going until after he died, 16 years later, but it explained why our lower middle-class lifestyle was quickly reduced to invisible poverty. We didn’t qualify for food…