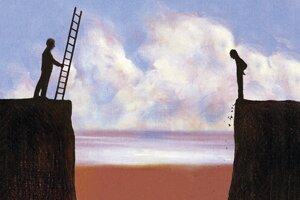 How to Help Family Members Coexist


Two months ago, Lucy, a single mom in her 30s, called me at her therapist’s urging. “My brother Sam molested me when he was 14 and I was seven,” she said. “I told my mother when I was a teenager, and it created a huge rift in the family. Sam’s no longer invited to holidays or family birthdays when I’m there, and my father stopped speaking to him. He has his own family now and has always said I misinterpreted our ‘closeness,’ which he’s told everyone was nothing more than harmless cuddling.” Lucy’s voice cracked on the word cuddling, and she paused.

“Our middle brother, Marcus, who’s always believed Sam and lives next door to him, has two kids who are my kids’ ages. My mother’s remained in the middle, half believing that Sam was just an affectionate child, and even mentioning that children regularly experiment with their sexuality in families.

“The thing is, it’s been a decade since I’ve seen Sam and a few years since I’ve seen Marcus. I’m at the point now where I want our children to have a chance to get to know one another. I’m not interested in being close with Sam, but I do miss Marcus. I’d like everyone to be able to be in the same room again, but I’m still angry about what happened and worried my brothers will be cruel to me if they’re…