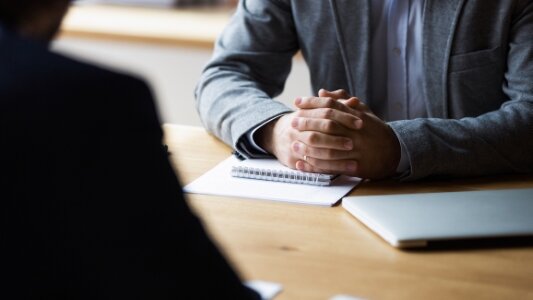 Learning to Take the Lead


The moment before a client meets a therapist is not unlike sitting in a theater just before curtain. The drama about to unfold will inevitably pale in comparison to the anticipation of what could be. Such was my experience the moment before I met my clinical supervisor at the mental health center at which I planned to earn my license hours.

As I approached his office, I imagined his warm, welcoming presence, and the enduring support this wizard of therapy would offer me. But suddenly, a cranky man resembling comedian Jon Lovitz opened the door. I tried to remain positive. Maybe he’ll be funny, I thought. I inhaled deeply as I entered, preparing for an ideal education. Then I began to talk about my work. “So, I have a client who . . . .”

"Oh my God,” he interrupted. “Is it hot in here? Can we turn on the air?" Anguished, he flapped the lapels of his blazer.

Don’t make this about yourself, I thought, trying to ignore the hot tingle of embarrassment and frustration in my cheeks. Being a good therapist means being humble and resilient. Interruptions are part of life. His abrupt cries of discomfort are not about you. I had done some reading on narcissism and did not want him to think I had it.

As I propped myself up, I began to describe the first client on the list I’d prepared: her presenting problem, her history, my formulation. Jon Lovitz’s brow furrowed as if he were in pain, or as if I were emanating a foul odor, or worse, as if I were simply boring. Don't be ridiculous, I thought. This is what supervision is for. I’d given up pursuing acting professionally to become a therapist, believing that forced charisma would no longer be part of my job.

I proceeded to share my assessment of the client and some possible interventions. “I was thinking something goal oriented, like . . . .”

"Oh my God, is that a fly? Is that a . . . ?" As he swatted his hand in random agitation, I couldn’t help but think the swats were meant for me instead.

Perhaps I’m spouting too much, I thought. Am I not asking him enough questions? "What do you think I should do?,” I asked, like a good student.

"Look", he said with hasty confidence, "Is she coming? Is she talking?"

"Then why do anything?"

“Indeed,” I agreed. “Maybe I’m trying too hard.” A great lesson learned, and on my first day of supervision no less. I’ll do better next time.

When it came time for session two, I was prepared: prepared to be unprepared. "So, everything's great. They're showing up. They're talking,” I said, pining for his approval. I tried to signal to him that I was zen and chill as I took a casual breath, indicating I had nothing pressing to report.

He glared at me in response with an irritated, labored grin that seemed to say, WTF? You’re not going to say anything? Why are you making this so uncomfortable for me?!

To extinguish the discomfort, I desperately turned the mic over to him, "So, I'd love to hear more about your work."

He didn’t mind responding to that one, actually. With a quick, warm smile, he launched into his years of training, his private practice, his nagging clients. I beamed with ease, portraying the eager student audience I sensed he wanted me to be. Ah, I get it, I thought. This is what I’m supposed to do with the clients anyway, isn’t it? Just listen. Make way for the other person’s need to speak.

My anxiety evaporated at last, for a moment. And then, he told me, "You should really make a list next time. Bring charts. Come prepared".

I was confused and distraught. I thought my days of auditions were over, but now, in anxious anticipation of weekly supervision, I found myself writing my own material, rehearsing, reciting, and rewriting it to make it fresher, faster, funnier. I perfected my character voices and gestures. I practiced my rhythm, my timing, my will to entertain.

At our next session, I introduced Jon Lovitz to my most vivacious client: the big-haired, big-nailed, Long Island gal who wanted a "ring-on-it" for Valentines (Val-en-Toymes) day—but settled for her man agreeing to take a lie detector (Loy-Detec-Tah) test instead, as there was apparently some discrepancy about whether or not he had an affair with her sister.

Jon Lovitz guffawed, “Are you really hearing this in your office, and not on Maury Povich? Hilarious!”

The following week I brought to life the lovable young mom who couldn’t seem to get out of bed and kept losing jobs, but who tried the "CBT experiment" I’d suggested: cook her favorite food, bacon, in the morning as motivation—which resulted in her eating an entire package and then promptly returning to bed.

The week after, I embodied the very loud, very large man, who on the first day of treatment imagined himself as the Incredible Hulk and me as his victim, but gradually began to dream of himself as Little Orphan Annie and me as Daddy Warbucks.

Jon Lovitz was consistently transfixed, moved, amused, and best of all silent. I was even able to lob in a few clinical questions now and again, and actually get answers from him. You've cracked the code, I said to myself. This act was a hit and it lasted for months.

But despite having effectively banished both of our anxieties from his office, I began to fixate on my supervisors’ clinical reactions, which were often exactly the same. "She's so focused on your reactions to her; it's like she can't live without your approval,” "This is typical of a borderline.", "Actually, she sounds full-on psychotic!"

Yikes. I thought, Is he describing my clients, or me? Curiosity became self-consciousness, paranoia and shame. He may have a point, I thought, I wouldn’t need his constant validation if I were more mentally healthy.

I dealt with this uneasy feeling by playing Jon Lovitz for my colleagues, my husband, my friends, my therapist, for anyone who would listen: e.g. "Oh my Gawd, is it hawt in hey-ah? Is that a floy?” Everyone laughed. And laughed. And then finally, they each asked me the reasonable (and obvious) question, "Why don't you ask for a different supervisor?"

This was a revelation. Yes, why not?. Maybe that would be a reasonable request. Maybe it’s not all my fault. Ergo, maybe he’s not great at his job. True, we can’t expect actors to be the characters we imagine, or humans to be wizards, but we can expect a baseline of responsibility and attunement from professionals who’ve signed up to play the significant role of teacher.

Having ungaslighted myself, I was now free to make a choice about my education with a free mind, uncompromised by fear and self-doubt.

And I chose (cue drumroll) . . . to give Jon Lovitz another try. After all, in the role of therapist, I often found myself suggesting to clients, instinctively, that conflict is inevitable in relationships, including between therapists and clients. But it’s by showing up with all of our discomfort and concerns and exploring our authentic reactions, insights, hopes and disappointments that we allow ourselves to embody as much of our true selves as possible, which I believe is the goal of therapy.

Maybe Jon Lovitz would ultimately prove to be too limited to give me the help I needed. But I couldn’t make that call until I showed up to supervision with my whole self.

The next time we met, I started from where I was, not from where I thought he thought I should be. This, ironically, turned out to be the most valuable insight in all of my training.

As I sat down across from my supervisor, I allowed my real clinical challenges to enter my mind, including the boring ones, and the ones that made me feel paranoid, inadequate, and ashamed. I opened my mouth to speak, when suddenly he blurted out.

"I don't know," I replied. I grounded and centered myself with a full breath, as I looked at him, patiently but poised. “Everything okay?,” I asked calmly but with an unwavering self-possession. He looked at me attentively, awaiting my lead. “Because I’ve got something to talk about."

Mark O'Connell, LCSW, MFA is a psychotherapist in private practice in New York City. He is the author of the books The Performing Art of Therapy: Acting Insights and Techniques for Clinicians and Modern Brides & Modern Grooms, as well as numerous academic and popular articles about mental health and the performing art of living. Contact: markoconnelltherapist.com.


Previous: Through the One-Way Mirror
Next: Therapy, Fast and Slow
Read 2751 times