The Mentor Who Changed My Practice 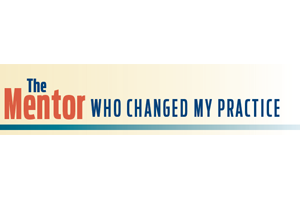 The Mentor Who Changed My Practice

When the economic downturn hit in 2008, I’d been receiving treatment for depression for almost eight years with Larry Lewis, the man who’d become my mentor. During the recession, things took a turn for the worse. My work slowed down, and I became very unhappy. One day, I came into a session anxious, and spent the whole time spewing out my worries. Before we finished up, I told Larry I was afraid my wife and I were going to lose our house. Larry had the perfect comeback. He looked at me and smiled. “Not today,” he said. In that moment, I froze. I realized that I’d been catastrophizing to the point where it seemed like I was going to be homeless five minutes after the session ended. Larry’s response was such an effective intervention because it brought me back down to Earth—and it was just two words. It was so skillful and compassionate.

About two years later, I took a huge financial and personal risk and decided to become a therapist at age 49. That was the beginning of a mentorship between Larry and me. During graduate school, I shared my notes with him. I remember thinking throughout training that I’d never be as good as Larry—with his amazing ability to completely change how his clients were thinking with just a short quip.

Years ago, I was treating a client who’d suffered childhood neglect and was now struggling at work. He was a tough client who didn’t readily talk about his feelings, but his work issues…


Previous: The Love Magician
Next: The Therapy Beat
Read 163 times