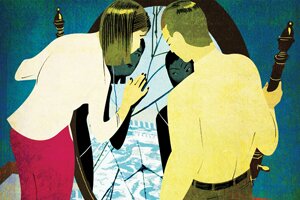 "I'm Not That Guy": Navigating the New Couples Conversation


Relationships have always been unendingly complex: a tricky dance of intersecting personalities, attachment issues, and personal histories. But in recent years, political and cultural realities have permeated relationship bonds in new ways, affecting the way partners read each other’s comments and actions, and at times, severely undermining trust.

In my practice, the politics of gender has become paramount in a way that we haven’t seen since the ’70s. Some clients have even told me it’s become the linchpin for whether or not the relationship can be saved.

Miles and Michelle are Korean-American professionals in their early 30s, who’d been married for three years when they started seeing me. Though politically aligned, our culture’s renewed focus on sexually abusive behavior was a trigger for heated arguments and blistering resentments that were tearing their marriage apart.

We were a few weeks into therapy when talk of comeuppance for infamous #MeToo characters like Bill Cosby and Harvey Weinstein was big news. Miles and Michelle were in agreement: any punishment the men faced should be severe.