On the Death of My Friend

On the Death of My Friend

A Reflection on Bipolar Disorder and Suicide


Rich Simon’s beloved wife, Jette, a psychologist, colleague, and friend, has asked me to shed light not just on serious depression, which 20 percent of us experience in our lifetimes, but bipolar disorder, the condition that Rich suffered from, which is found in only one percent of us. My aim is to offer a fuller understanding of how someone who spent decades working closely with so many therapists, and who was knowledgeable about so many schools of thought and therapeutic methods, could end his own life. While the piece underscores a critical clinical issue, my hope, and that of Rich’s family, is that it also honors Rich’s life and helps us begin the slow process of healing after losing him.

Rich had strong relationships and a loving family. With great courage and determination, he’d continuously sought treatment over many decades for the symptoms of bipolar disorder. His suicide is hard for mental health professionals to take in, as we devote our days to offering hope and effective options for managing agonizing emotional pain. People in the community are asking for answers, explanations. And I’ve talked at length with Rich’s immediate family and his Networker family about how I might attempt to offer some of that here.

Of course, when we discuss suicide with the general public, we need to do so with great care, given the research demonstrating that exposure to content dramatizing the act can actually increase rates of suicide. But here, I’m writing for our community of mental health professionals, which is facing a very different challenge: how to speak about the suicide of a public leader in our field, a colleague, and a friend to so many of us.

When I was a trainee in psychiatry, I first learned about bipolar disorder from Kay Redfield Jamison, who’d later write several books on the subject. Back then, the disorder was called manic-depressive illness, and in An Unquiet Mind, she revealed her own battle with it. She taught us that individuals with this condition have a high risk of suicide, and she showed us how to talk with compassion, nuance, and understanding about the unbearable psyche-ache of the mind and soul that often accompanies this disorder.

Rich, your light will continue to burn brightly around the world, and your work will reverberate for generations of therapists and their clients.

Many of us are attachment-trained therapists, keenly aware of how powerfully our early relationships influence how we come to regulate our internal worlds and connect with others. When these attachment relationships aren’t secure, the developing mind can be seriously compromised. While feeling disconnected from others can increase vulnerability to depression—and our society is rife with social isolation—early attachment experiences do not cause an individual to develop bipolar disorder.

As Rich’s friend for over two decades, and knowing his history, I can say that he likely inherited this condition, which he managed heroically for years and kept hidden from public view. While some clinicians who don’t have firsthand experience with bipolar disorder may assume the manic element is a kind of euphoria, they’d be terribly mistaken. Imagine a car engine inside the brain that doesn’t easily adapt to the natural changing of its own gears. At certain points, the car has a hard time driving smoothly, safely, and efficiently. In a hypomanic state, individuals may have increased energy, more ideas, and less need for sleep. But this early stage can transition rapidly into increasing extremes of mania, in which the brain is in overdrive. In such states, the mind can become dysfunctional in its thinking, and even overtly psychotic. In effect, the car veers off the road.

Following this out-of-control spiraling up, a crash begins, one that can culminate in severe depression. In this bipolar form of depression, our basic biological systems seem to shut down: individuals can’t sleep, or they sleep too much. They lose their appetite. Their energy drains away.

If Rich were editing this piece about someone else, he’d likely suggest something here like, “Danny-Boy, come on! Show, don’t tell!” But I won’t give details of those parts of his life he kept private. I will say that Rich’s bipolar disorder first revealed itself in his adolescence, before our field knew much, if anything, about this disorder. If we identify and treat it early enough, today there’s a good chance we can stop a process called kindling—a neurological term in which a condition begins to induce a worsening in its own unfolding. With bipolar disorder, this can mean that every 10 years, then every eight years, then more frequently, a cycle of mood swings can begin, often with days to weeks of escalating mania followed by a plunge into unrelenting depression that can last weeks, months, or sometimes, as with Rich at the end, years.

Even with this decades-long challenge, Rich never missed a single Networker Symposium in 43 years. For those of us who knew the depths of his internal struggle, it was always a relief that he could function in a role that meant so much to so many people—including him. He genuinely loved being on that stage, and many people tried to help him stay there for as long as possible: his family, close friends, coworkers, therapists, psychiatrists. He could not have had more love surrounding him at home and in the workplace.

Still, bipolar disorder can lead to such internal dysphoria that the brain shuts down, and life feels too painful to continue. For the many people Rich shielded from his pain, his suicide was shocking, seemingly coming out of the blue, an act that must have been triggered by some sudden loss or crisis. But those who knew how deeply he suffered understood that Rich’s final act was not impulsive, but rather the end of a long struggle he could no longer endure. He approached it with as much respect and expressions of love and gratitude for friends and family as he could.

But we should be careful not to glorify this decision and risk leading others to “give up,” when, in fact, for most people with mood disorders, including bipolar disorder, there is effective treatment. Medications and electroconvulsive therapy successfully managed Rich’s symptoms throughout much of his life. But unfortunately, in his 70s, after four consecutive years of unabating severe depression, these treatments no longer helped.

No one, including Rich, would want someone to choose the ending he did. Even so, he will always be a hero to me. I’m inspired by who he was—a fabulous, fun, loving, brilliant, insightful, compassionate, hilarious, social feng shui master, who courageously handled profound challenges for so many years. His ability to celebrate life despite his suffering is something to celebrate. What a gift to the world he was. 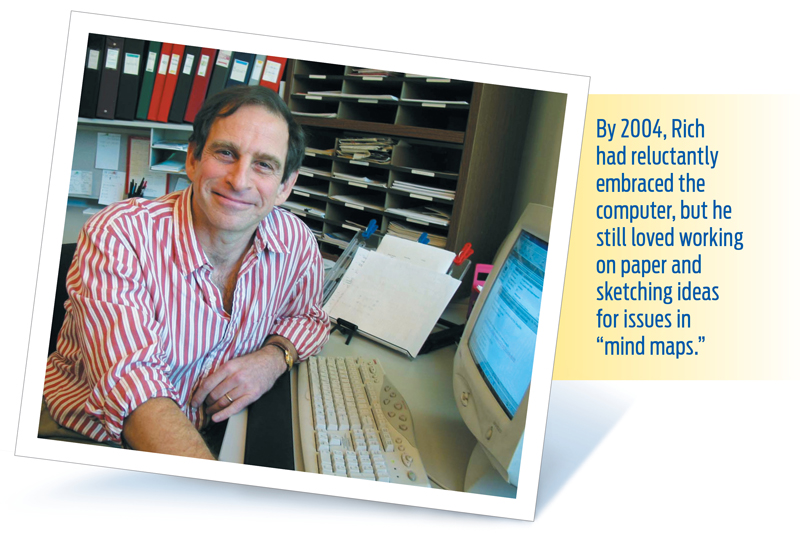 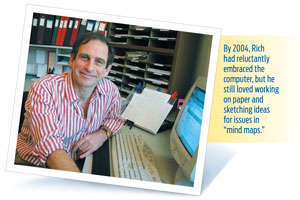 As Ralph Waldo Emerson said, “To laugh often and much, to win the respect of intelligent people . . . to find the best in others, to leave the world a bit better . . . to know even one life has breathed easier because you have lived here. This is to have succeeded.” In this way, Rich’s life was a success. A resounding one.

He taught me how to be more of a friend, how to find grace. And witnessing his devotion to his wife and daughter, and how their devotion to him kept the love flowing in him even as his brain was shutting down, taught me the value of family.

Rich, your light will continue to burn brightly around the world, and your work will reverberate for generations of therapists and their clients. We’re grateful for all that you’ve been in our lives (and will continue to be), for the community you built, and for the spirit of love and laughter you shared with us for all these years.

Daniel J. Siegel, MD, is the cofounder and executive director of the Mindsight Institute and the author of many bestselling books, including Aware: The Science and Practice of Presence.

Dan- Your words about Rich's life voyage were an eloquent and most fitting tribute to him. They also conveyed a larger message for all of us. I was touched when Rich extended me gratis invitations to annual Networker Symposia which, regretfully, I have not attended for several decades. My regret is not about missing content but is sadness now about the long time that has passed since experiencing direct contact with Rich. He was a genuinely warm and utterly remarkable person whom I was honored to consider a friend. I am among an enormous number who will miss him. Fred