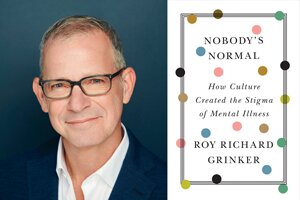 Beyond Normal: Our Evolving Attitudes Toward Mental Illness

The very title of anthropologist Roy Richard Grinker’s new book, Nobody’s Normal: How Culture Created the Stigma of Mental Illness, made me eager to read it. It brought back in full force the indelible childhood memory of my mother’s choked explanation of why we so seldom saw her beloved younger sister, my Aunt Anne. She was not well, my mother told me in a pained, hushed voice. She suffered from a type of illness that affected the way her mind worked, and as a result, she had to stay at a special kind of hospital. And, she added in even fainter tones, because not everyone understood this type of illness, it was best not to share this secret with anyone else.

I nodded solemnly, mirroring my mother’s tone of equal parts compassion and worry, but I was left both troubled and mystified by this mixed message of love, clouded by some vague fear of—what?

Now, with the help of Grinker’s thoughtful volume, I’m able to reframe this conversation as my personal introduction to the way the stigma of mental illness gets inside our heads. It’s a process, deftly explained by Grinker, by which a given culture’s underlying beliefs, assumptions, and moral…