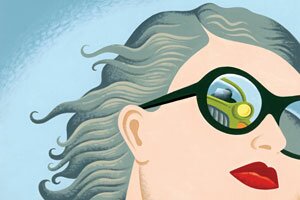 The Unbearable Heaviness of Being: Learning to Celebrate a New Shape


I’m fat. It’s true. I prefer fat to the medical term morbidly obese, which sounds like I’m one fat molecule away from expiring. The word obese conjures up all kinds of character flaws, like slovenly, lazy, and totally lacking in self-control. In some attempt to compensate for these slurs, a few nice, positive traits are often implied—but I’m not jolly or cheerful. Hell, most of the time, I’m not even in a good mood.

When it comes to my appearance, I’ve had an especially unfortunate history with medical professionals. In fact, I’ve kept copies of my consultations over the past 30 years. When I was 35, I gained an enormous amount of weight from psychotropic drugs and steroids. Before that, however, I was considered average to thin.

The following is the beginning of a consultation report from those halcyon days: “Dr. Manning is a very attractive, well-dressed, and well-groomed woman who engaged easily.” Fine with me.

Twenty pounds later, another doctor wrote, “Dr. Manning is an attractive, well-groomed, 38-year-old.” I lost a “very,” and apparently, I was no longer engaging.

Then, when I took up residence in the decidedly heavy category, a doctor referred me as a “pleasant, overweight, well-groomed 52-year-old.” What was this “well-groomed” deal? They always wrote it like it…